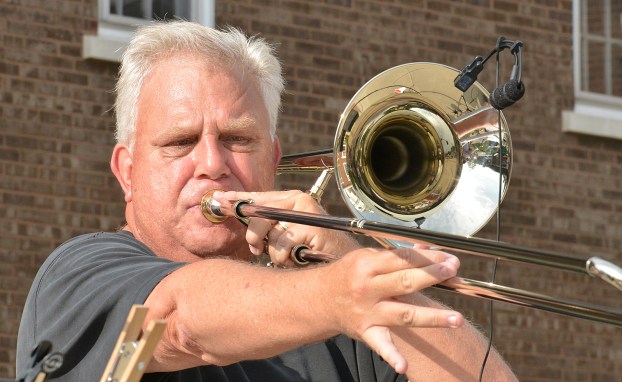 Photo by Robin Hart Bill Bandy plays trombone in the band Powerplay, which performed at Weisiger Park as the first in a series of concets hosted by The Heart of Danville. This is also Bandy’s first year as executive director of the Great American Brass Band Festival, set for June 6-9 in Danville. (Photo by Robin Hart)

This story was corrected on June 6.

With the forecast showing scattered thunderstorms through Monday, Great American Brass Band Festival and other area organizers have been working on rain plans. And they are no strangers to the “June showers” that often pop up over the weekend event.

As far as tonight’s Gallery Hop, “We are on, rain or shine!” said Mimi Becker, director of the Arts Commission of Danville-Boyle County. “I think we deserve a break after last year, but so be it …”

Becker said plans are already in the works to bring any music groups or artists stationed outside to inside locations, so the hop shouldn’t be interrupted.

The Gallery Hop is from 5:30 to 8 p.m. at locations designated with purple flags. Live music will be performed at multiple venues, with many locations offering refreshments.

“We have made the decision to set up inside,” Conover said. Although according to the preliminary forecast it’s supposed to clear up tonight, he said the library made the call in order to protect equipment used during the dance, just in case.

However, as Conover points out, holding the shindig inside hasn’t stopped festival-goers from swing dancing in the past. Last year’s dance was held in the lobby due to weather and welcomed a packed house.

“Although weather is pushing us indoors … festival-goers know how to have a good time — rain or shine,” he said. “We are thrilled to host the Great American Swing Dance.”

However, Friday night, “the show must go on, and always does” at Pioneer Playhouse. Heather Henson says being part of Kentucky’s oldest outdoor theater lends a lot of practice on how to handle inclement weather.

“The weather doesn’t look great for the weekend, but we’re always prepared. We have a great indoor space,” she said, which is ready to go in case of rain. The season opens with the comedy “Kong’s Night Out,” and a silent auction with big-ticket items will be held as a benefit and in celebration of the playhouse’s 70th anniversary.

Henson said everyone is welcome for the first show and annual opening bash held after the play. This year, Powerplay, a reunited group of Danville natives that includes GABBF Director Bill Bandy will play for the after party. The group recently opened up the summer Main Street Live concert series in Weisiger Park and received rave reviews for its performance.

Kate Snyder, marketing director for the Community Arts Center, says there is no “independent rain plan” for the Danville Art Festival. It’s scheduled to be up Saturday and Sunday on Centre College’s campus, with artists lining College and Second streets.

“The artists all have covered tents, so we will not be moving inside,” Snyder said. She said the plan is to keep them out as long as possible, but it will close down if inclement weather sets in.

For the Great American Picnic on Saturday evening, the event and bands will be moved indoors at two locations in the case of rain, wind and/or lightning. The concerts will be called early in the day, according to GABBF, so festival-goers have time to prepare.

Anyone who purchased picnic tables and/or catering services will be at Cowan Dining Hall, where four bands will play: Circle City Sidewalk Stompers, Walnut Street Ramblers, Todd Hill Orchestra and Stooges Brass Band. All audiences are welcome to Cowan, not only picnic table patrons.

If the rain plan is used, Norton Center for the Arts will also host bands during the picnic. The MetroGnomes, Advocate Brass Band and St. Louis Brass Band will play at Norton. There are no outside chairs, food or drinks allowed inside of the center.

Niki Kinkade, who was GABBF director for nine years, said there was only one festival during her tenure where Saturday’s big events had to be moved inside. “Centre College was so wonderful to work with and we were able to continue with the picnic and concerts.”

Kinkade said she knows how stressful it is organizing such a huge outside event.

“Having an outdoor festival brings an element of excitement, that is for sure …”

But, she said when the picnic was moved inside one year,  “It actually created an element of fun … I was glad that we never had a wash-out.”

She said it’s important to keep in mind that “weather is wonky.”

“The forecast could say thunderstorms and the sun could be shining,” just like what happened on Wednesday, she said. “I sure hope it would not stop folks from coming to town.”

On Thursday, organizers from Hometown Radio, who head up the Great American Balloon Race, said as of now the event is still planned for Friday evening. The alternate plan is to move it to 4-7 p.m. Sunday. Those who plan to take in the event should check the radio station’s website hometownlive.net for updates.

The GABBF has released this listing of plans should weather affect any events. All events not listed will be held at their regularly scheduled venues regardless of weather. Any rain plans that are put into effect will be announced on gabbf.org.

• Bayou & Brass will be moved from Main Street to the first floor of the city parking garage, on the corner of Walnut and Third streets, in the case of heavy rain and/or lightning.

• Shaker Village concerts in Harrodsburg will be moved inside of the Meeting House.

• Beaumont Inn concerts in Harrodsburg will be canceled with heavy rain, wind and/or lightning, but just delayed if the rain moves through.

• Run for the Brass will go on unless there is lightning or heavy wind.

• Yoga in the Park will be moved inside to Plank On Main.

• Bike in the Bluegrass will be canceled with rain.

• The Main Street Parade will go as planned if there is only light rain, but will be delayed if rain becomes heavy. The parade will be canceled in the case of wind and/or lightning.

• Kids Fest (Saturday and Sunday) will be canceled with rain, wind and/or lightning.

• The Festival Market and Food Village will remain open through light rain but will be delayed with heavy rain, wind and/or lightning.

• Weisiger Park and Main Stage concerts will be delayed or canceled if there is heavy rain, wind and/or lightning.

• The ecumenical service will be held inside of Norton Center for the Arts if the rain plan is used.

Danville man invaded Normandy from above — ‘I was lucky’

Seventy-five years ago today, Paul Chandler was a 25-year-old American soldier silently riding in a glider over enemy lines in... read more