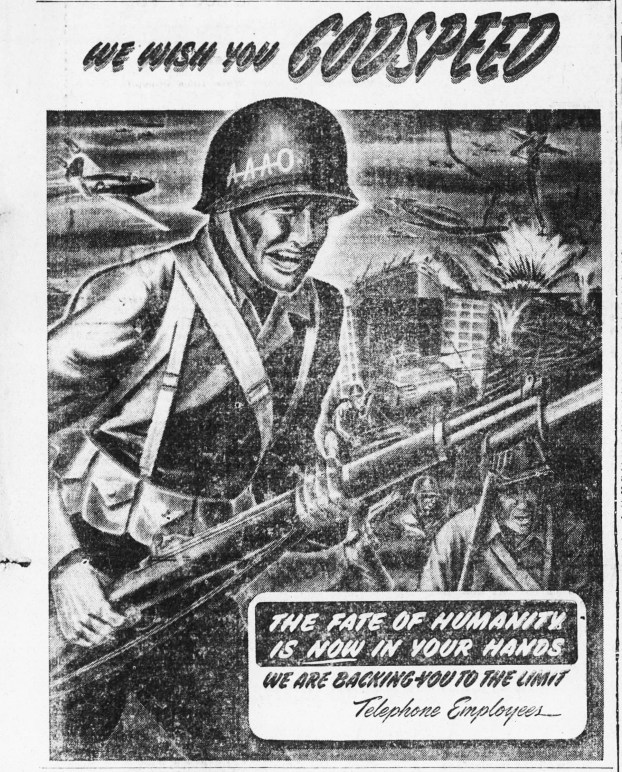 The Supreme Headquarters, Allied Expeditionary Force reported on June 6 that the Allied tanks and infantry smashed through the first defenses of the German Atlantic Wall along the Normandy coast of France, and drove several miles inland, through surprisingly weak enemy resistance in an assault aimed directly at Paris.

The story read, “Ferried across the white-capped channel by a great armada of 4,000 ships and thousands of lighter craft and screened from above by a thundering fleet of 11,000 Allied warplanes, American, British and Canadian troops hit the beaches along a front of roughly 100 miles between Cherbourg and Le Havre in the first cloudy hours of daylight and swept swiftly inland.”

The story reported that D-Day was originally set for Monday, but bad weather forced a day’s postponement.

The next day, The Supreme Headquarters, Allied Expeditionary Force reported that there was savage fighting taking place “as the Germans began moving troops by air in efforts to cope with the constantly-reinforced Allied airborne divisions whose successes highlighted the invasion.

Most other headlines and stories that day also focused on the war.

A story written on D-Day and published on June 7 said President Roosevelt reported in a news conference that “the great drive to liberate Europe is up to schedule.” That night, he was scheduled to lead the nation in a radio prayer for victory, freedom and peace.

A special service was held at the First Presbyterian Church on the day of the invasion; it was dedicated to victory.

The Boyle County War Loan Finance Chairman, Hulin Mattingly, asked that every American in Boyle County who had an American Flag to display it throughout the invasion and the Fifth War Loan period. Mattingly said, “I believe that in flying our flags we shall not only show our patriotism but help to keep our courage high to the end that we may hurry both the war and the War Loan to speedy, successful conclusions.”

The Community Arts Center is holding “Dollie and Me Camp” all this week. Girls in the camp get to participate... read more