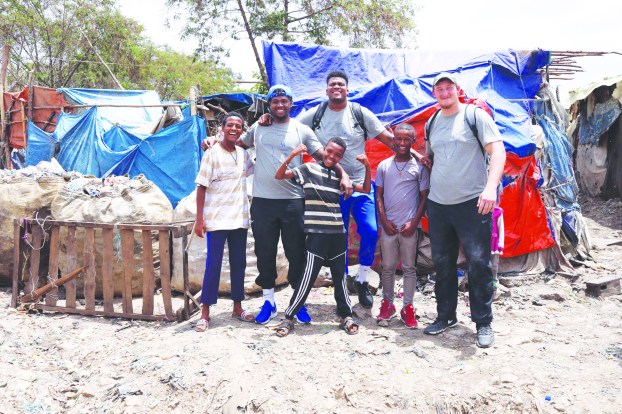 Kelly Putty is a Hopkinsville, Ky. native who went to Ethiopia in 2008 to adopt a child and had her “eyes opened” to the needs so many children there had, and founded Ordinary Hero to advocate for more children there to get adopted.

Jason Schlafer is the executive assistant athletics director at the University of Kentucky who has an adopted child from Ethiopia. His eyes were opened to the need when he started arranging for UK athletes to go on mission trips to see what the situation was like there due to the passion he had for the Ethiopian orphans.

Putty and Schlafer just “happened” to connect and last year Putty took a group of UK female athletes to Ethiopia, an experience that softball stars Katie Reed and Jenny Schaper said made a lasting impact on them. Volleyball player McKenzie Watson “got her world rocked” on the trip according to Putty and started sponsoring a youngster because the experience changed her life.

“Those girls were all amazing. They served their hearts out and loved every minute of it,” said Putty, who now lives in Brentwood, Tenn., and has five biological children and four she has adopted ranging in age from 15 to 27.

Schlafer liked the way Ordinary Hero facilitated the trip and Putty says there are various ministry sites her trips always visit that include a feeding program on top of a mountain and a trash dump community where the college athletes walk “right through the trash dump to smell and experience” the way kids live daily. They also visited an orphanage and took teenagers who had never been out of their village, been in a movie theatre, or even seen a movie to play arcade games and see the Avengers movie.

“Each day we do something different to open their eyes to a new community and new need. Going into the homes made from trash and getting a first-hand look at that always makes a huge impression,” she said.

Ordinary Hero and Putty recently got back from another trip to Ethiopia that included UK football players Landon Young, Calvin Taylor and Boogie Watson, who are all expected to be starters this season.

Putty says because of their size, the football players get attention as soon as they step off the bus.

“The kids in Ethiopia can’t believe what they are seeing,” Putty said. “The culture is so loving and welcoming. These kids are so grateful for anyone to visit. In the (United) States, the players got a lot of notoriety and are famous players. But to the kids in Ethiopia, they are just big boys who came to visit. They don’t know them from Adam. The families all really appreciate the time they take to visit.

“I think the football players were all blown away by the way the culture shares when most of them have nothing. They kept making comments after giving food to a child that the child would take it and give it to the child next to them before taking any for themselves. The players said if you hand them food, they eat it. But not these kids.”

Putty says the UK athletes make her “proud to be from Kentucky” because they take time to serve. It’s about a 17-hour — or more — airplane ride to get there for usually about five days on the ground. Jet lag is always a problem but Putty said conditions were even more severe on the recent trip with heat at an all-time high and flies “rampant” everywhere.

“They all just trudged right through it with no complaints,” she said. “Those were conditions they were not used to but they were so focused on serving others that they didn’t let anything bother them. Every athlete we have taken there from UK has come to really make a difference and that makes me so proud to be from Kentucky.

“I am such a mom and mothered these athletes all week. I had them call their moms and made sure they drank plenty of water. I sadly don’t know a whole lot about football and have six sons who get on to me about not knowing football all the time. I’m more a mom than a football fan but it will be fun now for me to come watch a game with these players I know.”

How humbling/rewarding is the process? Consider that Young came home in May and then contacted Putty to let her know his family would like to sponsor 12 different Ethiopian families from the trash dump site at $55 per month per family to help provide food, access to medical care, educational support and more.

“I never had anyone sign up to sponsor that many families at once,” Putty said.

If you would like to find out more about Ordinary Hero, how to become a sponsor, or make a donation, go to ordinaryhero.org. You can also email Putty directly at kelly@ordinaryhero.org.

“Our mission is to inspire and empower ordinary people to change the life of a child in need,” Putty said.

The March 20 match-up between Boyle County and Male was the beginning of the season for both teams. Their rematch,... read more