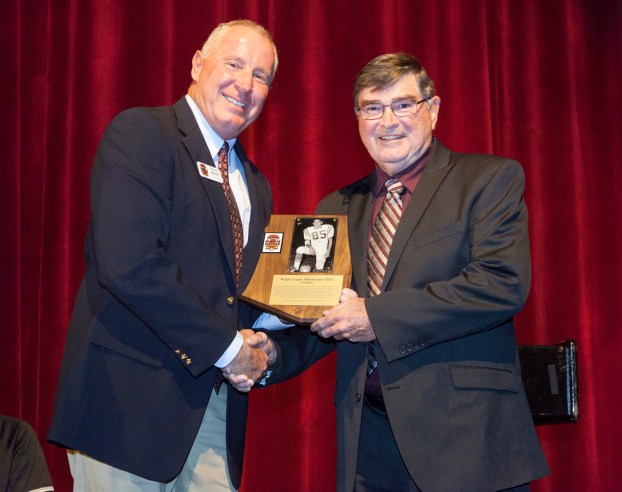 At left, Athletics Director at Mesa Public Schools and Mesa City Sports Hall of Fame Chairman Dr. Steve Hogen presents Roger Coyer with one of the hall of fame awards in November. (Photo by Tim Hacker)

Retired Kentucky School for the Deaf coach and former high school and college athlete, Roger L. Coyer was named to the Mesa City Sports Hall of Fame in Arizona this past November. 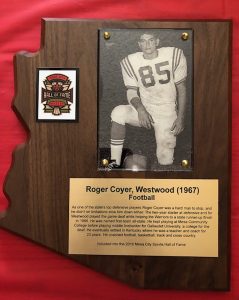 Retired KSD football coach and teacher Roger Coyer was named to Arizona’s Mesa City Sports Hall of Fame in November of last year. Coyer was the only deaf student at Westwood High School at that time. (Photo submitted)

Being named to the hall of fame in his hometown, Coyer said through an interpreter, “I’m overwhelmed. … I am the only deaf person who has this award.”

Coyer added, “I was shocked that they picked me,” but he doesn’t think it was because he is deaf. He believes he was chosen because of his successful high school and college football career.

Coyer was the only deaf student attending Westwood High School in Mesa from 1963-1967. Coyer said, “I can’t hear at all. But I’m a good lip reader.”

Back then, there were no mainstream programs for deaf students in public “hearing” schools, Coyer said. “It was hard.”

Sometimes Coyer’s classmates shared their notes with him. But mostly he learned by reading the assigned class materials and books and lip reading what the teacher was saying, he said.

Even though he was totally deaf, Coyer played four years on the football team — three of those years on the varsity team. He was named All-State Defensive End in 1966. He said he couldn’t hear the plays being called, so the quarterback took off his helmet so Coyer could read his lips. Coyer also was on the baseball, basketball and track teams.

In college, Coyer played football for two years at Mesa Community College as a defensive end before transferring to Gallaudet University in Washington D.C. where he played as middle linebacker and was captain of the team in his senior year. Coyer was also a football and baseball student coach and was a third and second baseman on the baseball team.

Coyer earned a teaching degree and moved to Kentucky where he was KSD’s P.E. and health teacher for 38 years. He also coached football, basketball, track and cross country at KSD.

When he was the head football coach, his KSD team won the National Deaf Championship in 1993 and was the Pioneer Athletic Conference Champion that same year.