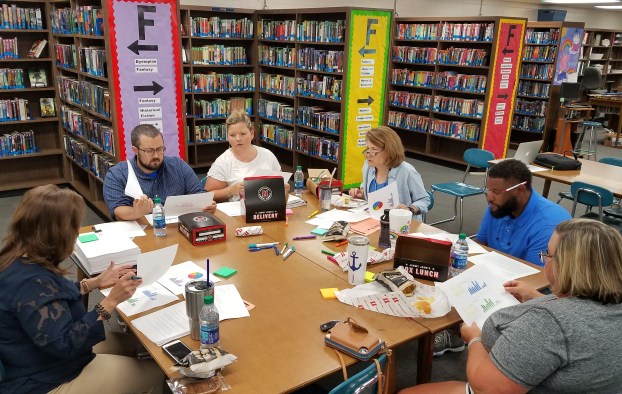 The Danville High School council meets in the school library Wednesday night to review survey data and come up with interview questions for finalists for the open principal position. (Photo by Ben Kleppinger)

The Danville High School council took another step toward choosing the school’s next principal Wednesday night, when it chose the criteria it is looking for in applicants and developed interview questions.

Ten people applied for the position before the application deadline arrived at midnight Wednesday, according to Superintendent Tammy McDonald. The council plans to meet Sunday afternoon for confidential interviews with three finalists. The agenda for that special called meetings states the council could take action to choose a principal after the interviews.

The council got 164 responses to its survey — 58 from parents, 55 from community members, 27 from staff/faculty and 24 from students. Overall, the attribute most valued was “builds a culture of trust, fairness and respect within the school community through team building and by treating all people with respect, dignity, integrity, fairness and in an ethical manner.”

About 70 percent of respondents said that attribute was important. The subgroups of community members, students and parents all chose that attribute as the most important. Only staff/faculty had a different top choice — they valued “believes in and will carry out discipline techniques that provide a safe, positive learning environment and also promote student empowerment, self-control and self-discipline” the most.

Two other attributes were rated highly by more than half of all the respondents:

• “understands the connection of school culture to student achievement;” and

One of the attributes listed on the survey was the least valued by all subgroups except staff/faculty, who valued it second-least: “deals with stakeholders in a consistent manner based on information-gathering, support and follow-up.” The council chose to omit that attribute from affecting the interview questions.

The council is looking for a new principal after a vacancy was declared by McDonald in May, signifying that Principal Haley Ralston would not be returning in that position for the 2019-20 school year.

Ralston, a Danville native, has been principal at DHS since November 2016. She took over the job when it was announced unexpectedly that then-Principal Catherine Slack would be given other job duties in the district.

Slack held the principal job for less than six months — she had been hired over the summer of 2016. Before Slack, veteran educator Win Smith served as principal on a interim basis for the 2015-16 school year, after the departure of Aaron Etherington, who left in the summer of 2015 to take a principal job at East Jessamine High School.

If a new principal is at the helm for the 2019-20 school year, it will be Danville High School’s fifth principal in six years.

The Danville High School council will hold a special meeting beginning at 4 p.m. on Sunday, June 9. The agenda includes a closed session to review applicants and conduct interviews with finalists for the position of principal; and possible action to select a principal.

The 11 attributes the council chose to look for in candidates are:

• is committed to closing achievement gaps and ensuring proficiency for all students;

• understands the connection of school culture to student achievement;

• believes in and will carry out discipline techniques that provide a safe, positive learning environment and also promote student empowerment, self-control and self-discipline;

• serve as an ambassador by welcoming input and being a model of good communication among all the stakeholders of the school community: parents, students, teachers, administrators and the community at large;

• builds a culture of trust, fairness and respect within the school community through team building and by treating all people with respect, dignity, integrity, fairness and in an ethical manner;

• ensures management of the organization, operations, finances and resources for a safe, efficient and effective learning environment;

• possesses strong organizational skills, the ability to multi-task and to delegate based on the strengths of stakeholders; and

• seeks to sustain and expand innovative approaches to education.