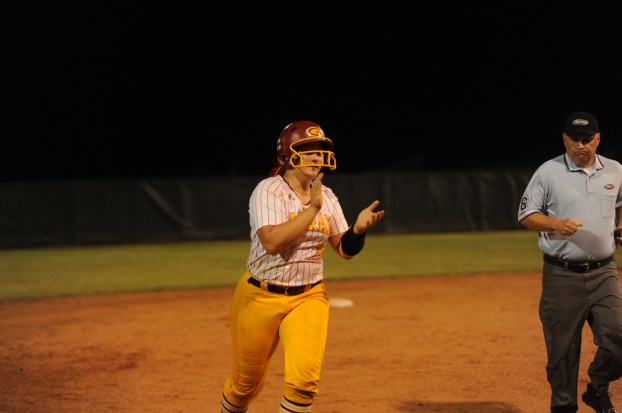 Katy Pozzuto celebrates while rounding third after hitting her 20th home run of the season in the 12th Regional Championship game against Boyle County. (By Derek Brightwell)

Garrard County junior Katy Pozzuto was named the south central regional softball player of the week by the website MaxPreps.com for the week of May 27-June 2. In her three games that week, Pozzuto hit four home runs, and drove in eight runs with an eye popping slugging percentage of 2.571.

“Katy had a tremendous season and this helped the team reach some of its goals,” Garrard County coach Todd Montgomery said. “We were able to win the 45th district championship for the first time since 2011.

“With Katy, nothing really surprises me when she starts swinging a bat. I remember working with her as a 6th grader and making some adjustments to her mechanics. She never looked back once she started seeing the ball bang off the outfield fences.”

Her numbers during the last week of Garrard’s season shouldn’t surprise anyone who had watch the junior slugger play all year. Her 20 home runs on the year give her the lead in the state, and currently find her tied for seventh place nationally. What is surprising is that through her first eight games, she had not hit a single home run.

“Early this season, she was hitting the ball hard but all her long balls were foul. But those balls were a sight to see,” Montgomery said. “Unless you were there to see them the stories would be hard to believe. Balls would go into the football bleachers or onto the football field. One ball was so high and went out so fast the umpire couldn’t find the foul pole in time to call it fair.

“Give Katy credit she keep working and did whatever it took to make sure her team won games.”

Spectators knew to lock their attention to the action whenever Pozzuto stepped into the box, as the junior closed the season averaging almost a home run every four at bats.

During the postseason run, which ended with a close loss to 45th district foe Boyle County in the 12th Region Championship game, Pozzuto elevated her game even more. In the first round match-up, a 6-5 win over Pulaski County, she went 2-3 with both hits being home runs, drove in four runs and earned a walk.

“I have never been zoned in like this before,” her coach heard her say in batting practice before the next game.

“During the semi game (against West Jessamine), she was intentionally walked twice after she hit a double in her first at bat,” Montgomery said, expressing that he was concerned teams would avoid pitching to her. “Her final at bat we thought they would walk her again but they pitched to her and she did what she does best…home run.”

In the championship game against Boyle, the Rebels did give her an intentional walk in her first at bat. In her second at bat, they did pitch to her, and got her to chase a low change up in the dirt to strike out.

“We knew her next at bat would be different,” Montgomery recalled. “Katy is like all great hitters in that she is able to make adjustments not only from at bat to at bat but pitch to pitch plus catching this year has enabled her to learn how pitches are called to get batters out. She understands hitting so all it takes is one word to fix a mechanical issue. The next changeup she saw resulted in a home run.”

The only downside to her incredible power numbers is, as is often the case with a hitter like her, teams don’t want to pitch to her.

“Teams do pitch Katy different. It has helped to have Fran Montgomery and Kelsi Moss in front of her,” Montgomery said. “They have gotten on base at a high percentage which makes it hard to pitch around her. Secondly, we have great hitters behind Katy that make teams pay for walking (her).

“It will not surprise anyone to see teams walk her more often,” he added, noting that his coaching staff has already discussed strategies around her being walked. “Katy will see more than her fair share of walks next season but she will adapt, that is what great hitters do. Expectations are always set high for our program so that will not change.”

The MaxPreps regional player of the week, coach Montgomery believes, will not be the last recognition Pozzuto will get for her play.

“She is an amazing person and player,” he said. “Katy will have another excellent season because of her character, her willingness to work hard, her ability and her desire. If you were to ask, she would say she is ready to start next season right now.

“Being named the Max Preps player of the week is an amazing award for her and will be one of many to come her way in the future.”