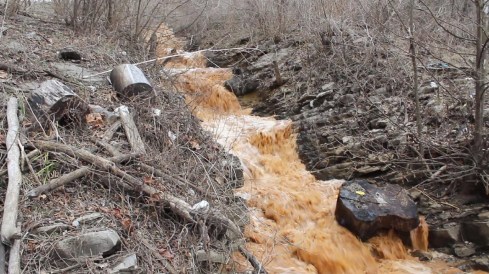 Kentucky Division of Waste Management (DWM) had employees on a site visit on Feb. 20, 2014.  On the site visit, they recorded a video of a discharge occurring and noted a number of other hydrogeologically significant features and contaminated areas. (Photo courtesy of the Kentucky Waterways Alliance)

A local group says if Kentucky Utilities really strives “to be a good neighbor,” then the company should hold a public meeting, along with state cabinet members, to explain how cleanup efforts on Herrington Lake are being handled. But since neither KU nor the state has agreed to this, the group created an online petition to get its point across.

The point is that “the community is watching closely to see ‘what a good neighbor’ KU is, which is what it claims to be,” resident Julie Pease said. And now, they’re watching the Kentucky Environmental and Energy Cabinet, which is responsible for enforcing and overseeing KU’s “corrective action plan” concerning pollution from E.W. Brown Power Plant getting into the lake.

Pease, Preston Miles, Linda and Jim Porter, Shannon Scott and Christa Faulkner are all members of Kentuckians for the Commonwealth’s (KFTC) Wilderness Trace Chapter, a grassroots social justice organization encompassing Boyle, Lincoln, Garrard and Mercer counties. After creating a Herrington Lake working committee, they’ve been attempting to find out more about what steps KU has taken to rectify pollution making its way into the lake.

The lake is a drinking water source for Boyle, Garrard and Lincoln counties.

The group plans to hand-deliver the petition to KU’s CEO and the Kentucky Energy and Environmental Cabinet when it hits 1,200 signatures.

They met recently at Grace Café to discuss the next moves and how to spread awareness of what’s going on in the lake. KFTC has about 11,000 members across the state, and 300 locally in the Wilderness chapter.

“And we’re always looking. Membership is wide open,” Pease said. The 300 members locally aren’t all active. Many people are just funding members, which is what Pease was until she found out about the pollution issue in Herrington Lake, which she lives next to and uses often — like many, many others, she said.

A suit was filed against KU in 2017 by Earthjustice on behalf of the Kentucky Waterways Alliance and the Sierra Club, demanding the utilities company clean up pollution from its Mercer County power plant. Coal ash waste, which contains selenium and other poisons, has made its way into the lake through groundwater.

More than four years ago, KU was being inspected again, after it had been penalized with a state fine and entered into an agreement to clean up contamination found close to Dix Dam, near the power plant. More evidence of pollution was found during the follow-up, including discoloration of lake water near the site. Kentucky Division of Water testing results showed selenium levels 98 times the amount legally allowed.

In its suit, Earthjustice included an independent study it commissioned from a fishery biologist, who previously worked for the state. Photos from the biologist’s work showed head and spine deformities in fish of the area, which he said are associated with selenium exposure. That study was eventually published in an international scientific journal.

KU has dismissed the suit and the biologist’s findings as political posturing, claiming results were inconsistent with what other testing has found. As part of its defense, KU pointed to the fact it had already entered into the corrective action plan set up by the state.

The company has completed improvements, including closing and capping ash ponds and “wet surface impoundments,” which attorneys and residents involved in the suit say is great, but does nothing to rectify the pollution they claim has already affected the area. And those improvements are a result of the EPA’s “more stringent CCR Rule standards,” as KU states on its website, referring to the Consumer Confidence Reports requirements through the Safe Drinking Water Act.

Activists say preventing further pollution is vital, but residents are just as concerned about how KU will handle what’s in the lake now, which could be a costly endeavor.

In December of 2017, U.S. District Judge Danny Reeves ruled his court had no authority in the case. The suit’s complaints were based on the Federal Clean Water Act and the Resource Conservation and Recovery Act; Reeves’ ruling stated that “Congress determined that regulation of groundwater should be left to the states.”

But an appellate court reinstated the case in September of 2018. Thomas Cmar, lead attorney on the case with Earthjustice, says it’s scheduled to go to trial in the fall of 2020.

Cmar said the case is still in the discovery process, with the company “slowly providing us with access to more of its information, and we’re doing the same on our end.” In order to proceed, he said Earthjustice has to show that its clients — Kentucky Waterways Alliance and the Sierra Club — have members who are personally affected by the pollution in the lake.

“The company hasn’t even tried to meet us anywhere close to halfway,” he said. And ultimately, Cmar said, the fact of how much this problem could affect those who live around the lake “unfortunately gets lost when parties go to court.”

Taking on the state

Cmar said the suit against KU is the same situation Earthjustice has seen around the country. “It’s the same sort of standard lines of attack that a lot of big corporate utilities take — deny, deny, deny and go through court.”

Earthjustice attorneys also scoff at the fact the state cabinet in charge of oversight allowed KU to hire its own consultant to do further testing.

KU spokesperson Chris Whelan said, “This was done by an outside group. We hired outside, independent consultant to do it.”

She also said that “preliminary reports say it’s good, there’s not any significant impact on the water quality or fish, so that’s good news.”

“That claim rings hollow when it hasn’t made its consultants’ findings public, let alone subjected them to peer review in the way that a legitimate scientific study would,” Cmar said.

The final report from KU is due to be given to the state in July. Pease said citizens only want to be informed about what’s happening.

Cmar said members of the community who rely on the lake have a right to know what the company is finding, be able to ask questions and hear from experts who are not on the company’s payroll. “We are very concerned that KU is paying these experts to look for ways to minimize the problem and continue trying to avoid taking responsibility for cleaning up the mess …”

Whelan said, “We haven’t seen the final report yet.” She said it will summarize the sampling and monitoring results.

When asked if the report will be posted anywhere for the public to review, Whelan said, “Everything we’ll turn in will be public anyway, by statute. It’s all public. Because we’re a regulated utility, everything we submit to the cabinet or the public service commission is a matter of public record.”

Earthjustice attorney Locke says the state should also be required to share certain data. On Aug. 23, he led a suit filed against the Kentucky Energy and Environmental Cabinet, seeking an order to release documents the cabinet refuses to make public, and gave no legal reason for withholding.

The cabinet is accused of withholding more than 180 records that Earthjustice requested relating to testing of toxic pollutants in Herrington Lake.

“Nobody is informing the public about what’s going on,” Locke said. He said the cabinet has “concealed potentially hundreds of documents we’ve requested” that could shed some light on the contamination problem.

A hearing in the open records suit against the state will be held June 24 in Franklin District Court.

Pease explained that KFTC got involved in the “coal ash campaign” first due to the case around the LG&E Cane Run Road power plant in Louisville. LG&E and KU Energy is a subsidiary of the PPL Corporation. Neighbors of that landfill have been dealing with coal ash blowing onto their properties and homes for years.

In 2014, a Jefferson County state representative sponsored a bill demanding backup plans in the event of a coal ash spill. The bill also required proper coal ash containments, such as liners that prevent toxic chemical seepage into ground and water supply. That bill died in committee because it could not get a hearing.

KFTC says coal ash is the largest industrial waste stream in the country, yet it has never been regulated to protect the public.

“The citizens group — they just want information,” Cmar said. “I think the community should be involved in this process. And the state has been working to hide information.”

He said in cases like this in other parts of the country, concerning sites like the E.W. Brown power station, there tends to be a tipping point. Usually it’s political pressure that causes local officials to “no longer turn a blind eye to it,” he said.

Cmar said what ultimately will create change is the people who live around the lake, and others who depend on it for their water source, continually speaking out. Hopefully, he said, at some point, the pollution issue can no longer be ignored.

“They are just asking for information. Just asking for people to tell them the truth,” Cmar said. “And it’s an election year in Kentucky. You’d think people currently in charge of the state agency would want to show they’re doing their job and looking out for residents.”

Pease said right now, the group is not at all about confrontation. “Right now. You’re our neighbor, you say you want to be a good neighbor. Please, be that good neighbor.”

John Mura, director of the energy cabinet’s office of communications and public outreach, was asked if there could be any change where the state is concerned about offering a public meeting; and, if not, what residents who would like to know more about the cleanup efforts should do.

“The Cabinet has met with Kentuckians for the Commonwealth in the past, as we believe that the public’s business should be as transparent as possible,” Mura responded in an email, adding that KU’s next response to the agreed order is due next month.

“Our intent is to begin putting documents relevant to this issue on the cabinet’s website for public viewing very soon, possibly within weeks.”

To find the petition through Kentuckians for the Commonwealth demanding a public meeting be held by Kentucky Utilities to inform residents about its planned actions to clean up pollution in Herrington Lake, visit kftc.org, and click on “take action” under the “get involved” tab.

A few volunteers at Bluebird Market sold lemonade Thursday to help raise money that it lost when the fencing that... read more