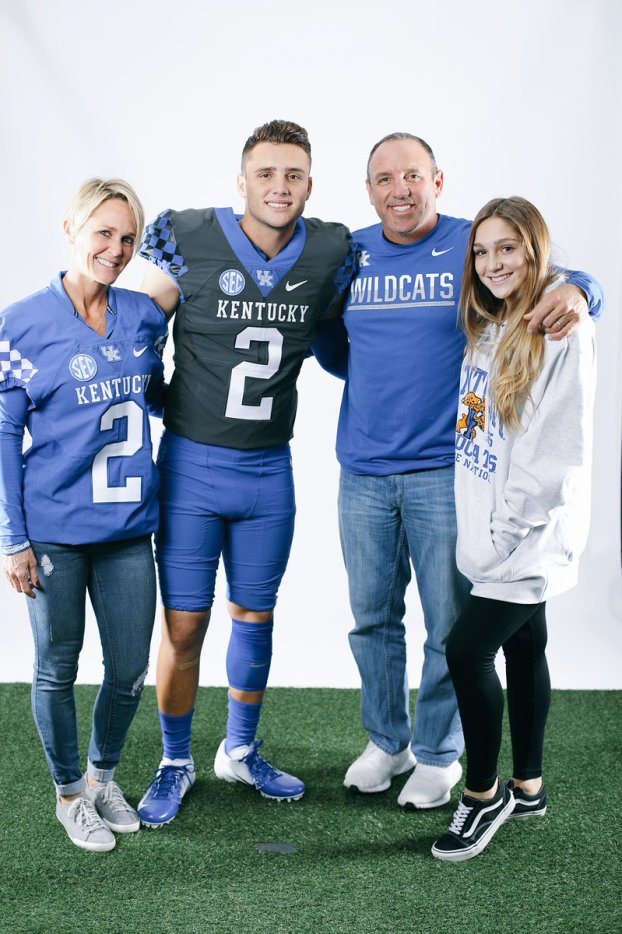 Nik Scalzo on his official visit to UK with his father, Jerry, and mother and sister (Photo submitted)

Five months after he tore his anterior cruciate ligament, Kentucky signee Nik Scalzo was cleared to start training again. Now just six months after his senior football season was ended by the knee injury, he’s so fit that he recently posted a video of himself doing a backflip.

“The doctors said it was remarkable that he was able to be cleared after five months,” Jerry Scalzo, the quarterback’s father and assistant coach on his high school football team, said. “Twelve weeks after his surgery, he was doing an hour of therapy and then an hour and a half of agility work five days a week. He’s on a mission.”

The 6 foot Scalzo is a three-star signee out of Cardinal Gibbons High School in Fort Lauderdale, Fla. who completed 60 percent of his passes (522 of 876) for 6,471 yards and 74 touchdowns with just 23 interceptions in three seasons as a starter. He also ran for 613 yards and four scores.

“He kind of was almost glad he had the injury because he admitted he didn’t know if he would have worked so hard if he had not been hurt,” his father said. “Sometimes kids don’t work as hard as you might want because some things just come natural and easy.”

Scalzo’s father said the injury forced his son to strengthen his entire body, not just his knee. He’s put on about 17 pounds and now weighs 190.

“He’s benching a ton of weight and looking great,” Jerry Scalzo said. “Obviously his knee is 100 percent. He’s lucky he didn’t tear his MCL or meniscus, so that was good for him but he really worked hard to get back to where he is. It’s a testament to his trainers who were not scared to push him and did not baby him.”

Scalzo’s trainers had worked with various college players to get them ready for the NFL Combine. That was the 12-week period where Scalzo was in the rehab center geared for those coming out of surgery.

“No disrespect but he was in there mainly with elderly people getting rehab. He did not have that fiery guy pushing him. Then he got with these trainers who train pro athletes and it was like putting dynamite on him. He likes being pushed to that level,” Jerry Scalzo said.

The Florida quarterback is coming to Kentucky to push others, too. He knows Terry Wilson is the returning starter off last year’s 10-3 team and that Troy graduate transfer Sawyer Smith has over 600 collegiate snaps. Plus, UK also has incoming freshman quarterback Amani Gilmore of Louisiana along with redshirt freshman quarterback Walker Wood.

“He is the kind of guy that just wants an opportunity,” Jerry Scalzo said. “I told him things may not fall his way this first year but to keep a good mindset. Don’t go in being arrogant saying you are taking Terry’s job. That’s not who I raised. Be competitive, be a great teammate, lead by example and if you get the opportunity, go play ball.”

Nik Scalzo thrives on being told he’s too small, too slow, too inexperienced. That just makes him more determined to show he can be a successful Southeastern Conference quarterback.

“That’s his personality. I stopped telling him things so he wouldn’t just try to prove me wrong,” Jerry Scalzo said about his son. “He is just that super competitive and I don’t care what we are playing or doing. That’s just him and Kentucky fans are going to see that.”

By LARRY VAUGHT Contributing Writer Kelly Putty is a Hopkinsville, Ky. native who went to Ethiopia in 2008 to adopt... read more