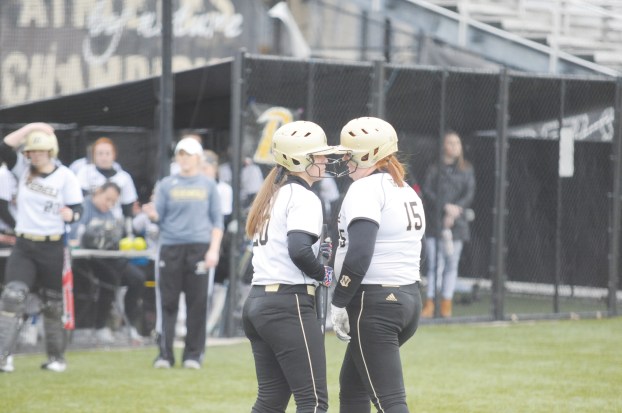 Senior Katy Grace Chadwell (15) gives junior Keely Bowling (20) some advice before Bowling's at bat in a scrimmage early in the season. (File photo by Matt Overing)

The Boyle County Rebels were well represented in the Kentucky Softball Coaches Association’s 2A All-State teams, named over the weekend.

Senior Pitcher Katy Grace Chadwell was named to the first-team, junior first baseman Keely Bowling made second-team, and junior outfielder Izzy Gervacio rounded out the honors on the third-team.

Chadwell (senior), Bowling (junior), and Gervacio (junior) were all also named to the East All-Stars, with a chance to represent Kentucky against Tennessee.

“I think it’s a very deserving honor. I’m very proud of what she accomplished throughout her career here,” Boyle Coach Brian Deem said of Chadwell. “This is just validation of not only what we see, but that other coaches have seen her grow and be successful.” 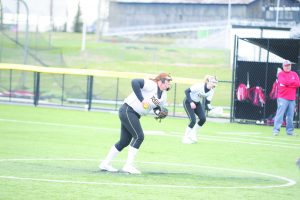 Senior Katy Grace Chadwell was one of the state’s top pitchers all season. She was named both to the First-Team All State for the 2A level, but was also 2A Player of the Year. (File photo by Matt Overing)

Chadwell went 20-5 as a pitcher, striking out 152 batters while only walking 25.

Bowling, primarily a first baseman, but also played some third this year, hit .417 with a .750 slugging percentage hitting fourth. She had 10 big flies and drove in 35 runs.

“I think she’s a very versatile player for us, playing both corners and batting in the four hole,” Deem said of the junior. “As a freshman, I knew she’d be special. So I’ve watched her grow and just see the game at a higher level. It’s a testament to the hard work she puts in, not just on the field, but off.” 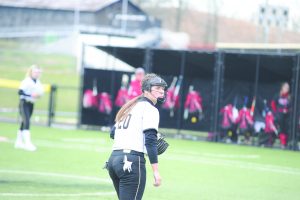 Junior Keely Bowling (20) played both first and third base for the Rebels this season. Her vesatilty and offense helped her be named to the 2A All-State Second-Team. (File photo by Matt Overing)

Izzy Gervacio was the leadoff hitter for the 12th Region champions. She hit .446 and had an on base percentage of .525. She also has 26 stolen bases, with a success rate of 88.7 percent. In the outfield, she recorded 45 putouts with only one error. 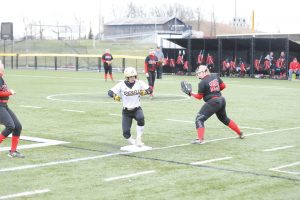 Izzy Gervacio’s 26 stolen bases made her an “extremely deadly” leadoff hitter for the Rebels this season. (File photo by Matt Overing)

“I always call the outfielders the ‘Rodney Dangerfield of softball’, they don’t get the respect they deserve” Deem said of Gervacio’s postion. “With her being a slapper, she doesn’t get the big RBI numbers or the extra base hits. But with her on base percentage and her stolen base number, she’s been extremely deadly as a leadoff hitter for us. She turns singles into doubles and triples by stealing bases.

“It’s a validation, not just of her, but of all the work outfielders across softball put in.”

Two other familiar faces made the 2A All-State teams. Garrard County senior Kelsey Perkins also received first team honors, and junior catcher Katy Pozzuto earned a second team nod. Perkins was also named as the 12th Region Player of the Year as well as being named to the East Senior All Star Team, and Garrard’s coach, Todd Montgomery, earned Coach of the Year honors for the 12th Region as well.

“Both Kelsey and Katy are well deserving of the all state recognition. Not only their talent but their character and leadership helped our team be successful each year. Both are proud to represent Garrard County,” Montgomery said of his players. “They carry on the legacy of past players and teams at GC. By taking pride of how they handle themselves enabled them continue the standard that young softball players look up to and try to emulate in our community.

“Winning the player of the year award means a lot to Kelsey,” he added. There are a lot of talented players in the region.  Being chosen by the coaches show how they respected her talent and recognize what she has done against 12th region teams the last 4 years. She battled through some aches and pains that would have keep most out of several games. That toughness will help her as she begins her career at Morehead State this coming fall.” 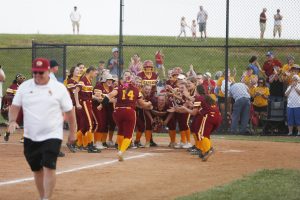 As for being honored as coach of the year, Montgomery was deferential.

“(It) is a nice honor. All the credit goes to our players, my coaching staff  and our softball family,” he said. “I would gladly trade it in for a couple more runs in the region championship. For me, it is a reward to see the team develop, improve and fight for championships. Seeing them go on to graduate and excel in their chosen fields is what it ultimately is about.”

Corrections: In an earlier version of this story, Keely Bowling was incorrectly referred to as Browning, and Izzy Gervacio was mistakenly left off the East All-Star teams. The story has been updated to reflect those changes.

By LARRY VAUGHT   Kentucky volleyball standouts Leah Edmond and Madison Lilley were among 17 players that attended the national... read more