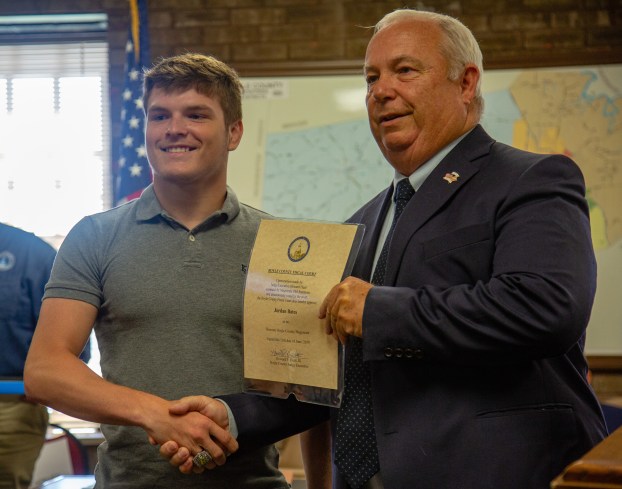 Jordan Bates, left, is congratulated by Boyle County Judge-Executive Howard Hunt after being named an honorary magistrate by the Boyle County Fiscal Court Tuesday. The designation is awarded to students and community members who lead the court in the Pledge of Allegiance. (Photo by Ben Kleppinger)

Boyle County’s Jordan Bates already has several titles he can be proud of — state champion in wrestling and incoming West Point cadet among them. As of Tuesday, Bates can also call himself an “honorary Boyle County magistrate.”

The Boyle County Fiscal Court bestowed the title on Bates at its regular meeting Tuesday morning, when Bates led the court in the Pledge of Allegiance.

“I had the privilege of visiting with Jordan and his sister in my office before this meeting and I can tell you that I was very impressed with him and his sister,” said Judge-Executive Howard Hunt, a retired brigadier general in the U.S. Air Force. “They both will be people that we should be noticing in the future as leaders of this country in some capacity.”

“He owns the records for most wins in a season and career wins,” he said. “… Academically, Jordan has been a four-year all-state academic wrestler, ending his senior year with a 4.25 GPA.”

“He’s the kid that comes around once in a lifetime,” wrestling head coach Seth Lucas said after Bates’ victory. “He sets the standard for Boyle County wrestling.”

This article has been corrected to reflect the correct month when Jordan Bates begins as a cadet at West Point.

Former Danville Christian Academy basketball player Preston Carter will be attending Midway University where he will continue his career as... read more