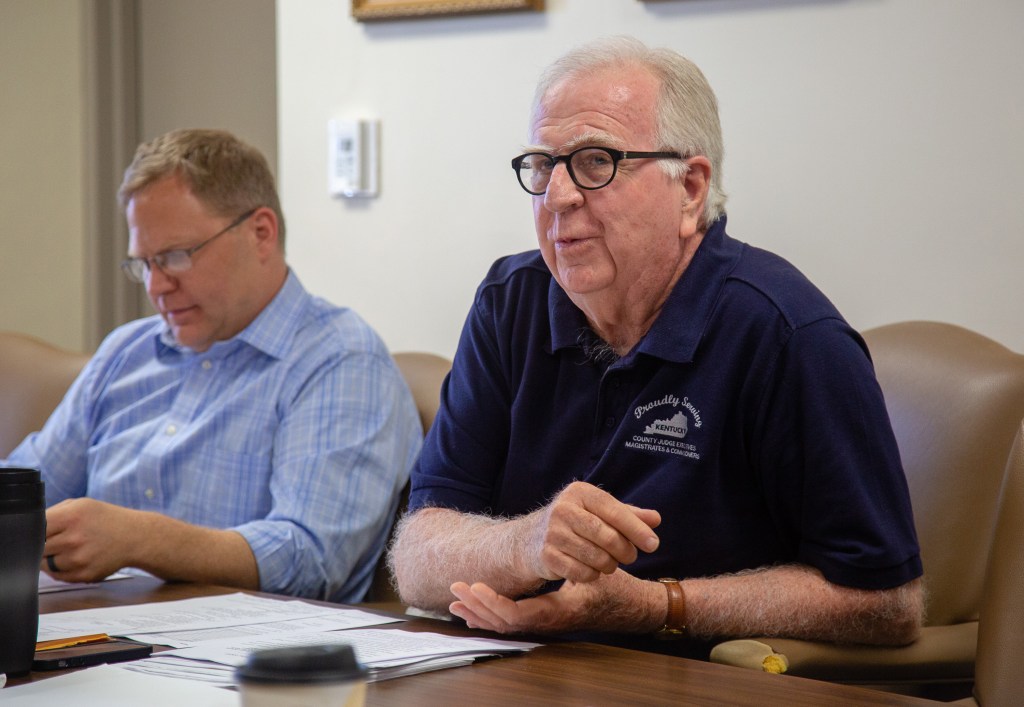 Recent arguments in Boyle County about economic development could have been handled better if the Boyle County Fiscal Court had been communicating more with its appointees to the board of the Danville-Boyle County Economic Development Partnership. That’s according to the appointees themselves, and Boyle County magistrates were in agreement with them Tuesday morning.

“It’s been a little bit confusing … that we’ve been your delegates for the last two years, but we’ve never had any exchange of content, thought, idea — we haven’t been given the opportunity to bring you all back information,” said David Williams, founder of Burkmann Nutrition and one of the fiscal court’s appointees to the EDP board. “I hope that we can improve on that. I think if we had had that opportunity, some of the misconceptions and misinformation, including things that have been published that have been factually incorrect could have been avoided.”

Members of the fiscal court have been among the harshest critics of the current economic development arrangement in the months since it was revealed that the distilling company Diageo had been considering a location in the Boyle County industrial park for a multi-million dollar project, but ultimately went elsewhere after the Boyle County Industrial Foundation withdrew the site from consideration.

In April, for example, magistrates accused the Industrial Foundation of failing to consider the total picture in regards to tax revenue for local governments that could have been realized from the project.

“You guys were more concerned about such few employees taking up such a large piece of land,” Magistrate Phil Sammons alleged at the time. “… But you didn’t consider the tax base of the city or the county.” That claim was flatly denied by Industrial Foundation Chair John Albright.

Magistrate Tom Ellis has called for more direct input from elected officials on the Industrial Foundation board. Ellis and Judge-Executive Howard Hunt have both voiced support for the idea of “streamlining” the EDP, though Hunt has acknowledged “I don’t know what that means, exactly.”

Magistrate Jason Cullen said at a town-hall-style meeting earlier this year that public officials need to be given more information from the EDP and it needs to be held to a higher standard of producing results.

“We haven’t seen a good forward movement, a good return on investment,” Cullen said during the town hall.

Based on Tuesday’s discussion with Williams and fellow appointee David Maynard, none of the fiscal court’s perspectives on the EDP were formed with input from its citizen appointees to the EDP board.

“What I have learned in the last two years is the sincerity and the concerted effort that these volunteer members that are serving on EDP are making to support economic development in our community. I have been very impressed with the level of commitment,” Williams told magistrates. “… (Economic development) is much more complicated and much more competitive than it used to be.”

Williams acknowledged that the level of confidentiality needed in economic development work makes things very complicated for a public-private partnership such as the EDP.

But “I don’t think it’s possible for capitalism to function with total transparency on each and every business endeavor,” he said. “… That is a real complication. One that comes to the public perception of what’s going on. It’s a complication that I don’t know how to totally remedy. The only thing I can ask for is for you all to have a reasonable level of trust in your delegates.”

Williams acknowledged the Diageo project as “a major piece of business that went to another county.”

“There’s a whole lot more to that story than has ever been revealed because of the confidentiality commitment that was required in those negotiations,” he said. “I think forthcoming will be the revelation of the rest of the story that will lay to rest once and for all the confusion that has existed around that piece of business. Please trust me when I tell you there is a whole lot more to the story than has ever been revealed.

“… I hope that we can go into our future with support from this body and a spirit of ‘help me understand’ rather than ‘I gotcha.’”

Williams said perceptions created in the Boyle County community by criticism from the fiscal court “doesn’t do anybody any good.” And, he added, “the people that are considering bringing their business here — they’re sensitive to things like that.”

“Hopefully, your delegates can better communicate with you all to bring you as much factual, truthful info as we can, in order that we can continue this journey of making our community better.”

During his part of the conversation, Maynard said he had been “more of a critic than anything” of the EDP in the past, before he got involved with the partnership.

“I have learned a lot. This group of volunteers that come together for the EDP, they’re very serious in what they do,” he said. “… (EDP President) Jody Lassiter earns his salary. He is a very dedicated, hard-working individual.”

Maynard told the fiscal court, which includes four members new as of January, “you don’t have to take 100 percent of the blame for not communicating, because I think half our service was under the old regime that you replaced … I guess we can take some of the blame, too, can’t we?”

Maynard also hinted at economic development revelations yet to come: “There are some exciting things happening that we can’t disclose. Hopefully soon, there will be some very exciting news to put out into the public.”

Hunt and magistrates led off the discussion with apologies for a lack of communication even before Maynard and Williams spoke.

“The court really did not communicate a whole lot with these gentlemen and I’ll take responsibility for that,” said John Caywood, one of the court’s two veteran magistrates.

“We are honored to have you guys,” said Phil Sammons, the other long-time magistrate.

Judge-Executive Hunt said his “first six months has been a whirlwind.”

“That’s not an excuse, but I do want to offer myself up any time (for you) to come visit … my door is always open.”

After Maynard and Williams spoke, Magistrate Cullen thanked them for serving on the EDP board.

“I am more than happy to suggest some sort of committee or whatever we have, where we get together and are better informed … I’m happy to be a part of that.” he said. “While things happened over the last six months, there were some good learning experiences from that, as well. Sad to say, but I think both sides have a better understanding that we both need to do better. And I think where we don’t want this stuff thrown out in the public to make us look bad, we had some issues that needed to be addressed, that needed to be handled. …

“While it seems like there’s some back-and-forth going on, it’s all essentially the same group of people caring about a community.”

“We can do better. We will do better,” Caywood followed. “Thank you for bringing it to our attention.”

Part of Williams’ and Maynard’s purpose in visiting the fiscal court was to ask about a $30,000 reserve the fiscal court has created that could be given to the EDP in addition to the county’s base funding of $70,000 next fiscal year.

“As your delegate to EDP, I hope that at some point, you can inform Mr. Maynard and me of more specifics of what would be required in order for your body to fund the contingency amount that you now have in reserve,” Williams said. “We don’t know what we’re supposed to do in order to gain that additional support … I hope in a reasonable time, as soon as possible, that you all can decide — what do you want in order for EDP to earn the right to have that additional support?”

The fiscal court members agreed with Williams suggestion that a follow-up discussion would be appropriate, in order for the fiscal court to provide its EDP appointees with more specifics on requirements for the $30,000. Williams noted the EDP has to finalize its next budget by July 1.

As part of the 2017 restructuring of the Danville-Boyle County Economic Development Partnership, the governments of Danville and Boyle County were both given three voting seats on the EDP board. Danville has chosen to fill its seats with elected and city officials; Boyle has filled its seats with the judge-executive and two local residents. The fiscal court voted Tuesday to reappoint one of those residents, Community Trust Bank Danville Market President David Maynard, for a new three-year term beginning in July.