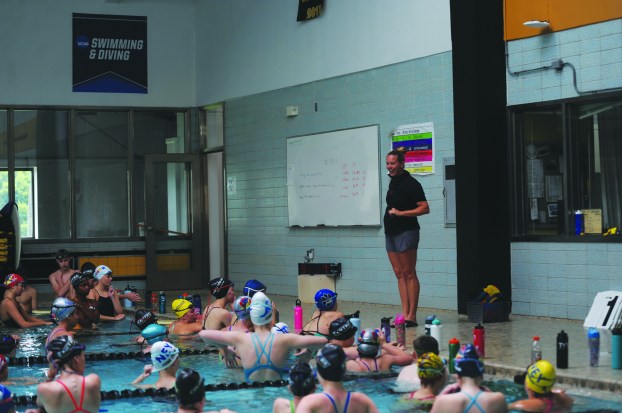 Former Centre assistant Sarah Holman returned to her alma mater to help run the camp she co-created. She said her favorite thing about coaching is when "the light bulb goes off for a kid and they realize they can do it." (Photo by Derek Brightwell)

“Obviously I’m excited to be able to produce that kind of experience for the kids that are here,” Brownley said. It gives credibility to the camp when you have an elite level coach, and local level coaches but to be able to Facetime in some of those big name people. I think that the kids are walking out of here, if they’ve paid attention, will definitely have a higher swimming IQ than when they check in.”

Colleen Maggard, who swam for the Colonels from 2008-12 and has been an assistant for Brownley for four years, also helps run the camp. She’s been involved all four years as a coach, and also volunteered her time while she was a swimmer for the team. She believes that working with the kids at the camp helped her with her own technique as a swimmer but also helps her grow as a coach. 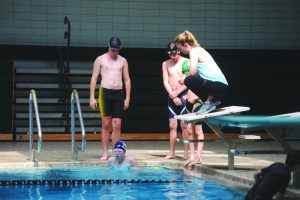 “It really informed my experiences as an athlete because coaching, explaining to someone else how to do things really makes you pay attention to how you’re doing it a lot better,” Maggard, who had coaching experience at a summer league team before joining the Colonels staff, said. “Even as a coach, it really challenges you to find new ways to explain things. New ways to get inside the heads of the swimmers and make these things approachable to them. Especially when you get into the technical, the physics, the nitty-gritty of how each and every part of your swimming needs to go. That part has been really cool and the swimmers always have such great questions that really make you think and force you to be on your toes.

“You never want to be a broken record as a coach, saying the same things over and over again and expecting different results from your swimmers. Being outside of the normal realm of college, NCAA level of athletics, you’ve got a wide range of skill levels too,” she added. “We’ve got two kids who it’s their very first year of swimming. They’re just starting out in the sport. And we’ve several who are flirting with junior national times, sectional times. Really high level for their age in the sport. So we’ve got to figure out ways to make the workouts fun and engaging for all of those ranges while also making sure those kids are getting what they need to get out of the camp.”

Sarah Holman, who helped Brownley start the camp in 2004 when she was an assistant, has since gone on to coach at some of the highest levels of the sport. After leaving Centre, she took a job at a club in Charlotte, NC called SwimMAC where she worked with David Marsh. It was there that she felt she improved as a coach, as well as making the connections with Olympic medalists.

“(Marsh) had a group of professionals training in Charlotte during several of the years I was at SwimMAC and I had the great opportunity to be around them and see what they were doing and be somewhat involved in their training,” she said of the experience. “I mean, Ryan Lochte was there, Katie Meili, Anthony Ervin, Tyler Clary, quite a few who’ve gone on to win Olympic medals over the years.”

One of her swimmers qualified for Team USA for the Junior Pan-Pacific Championships in Fiji, and through that, Holman was invited to join the coaching staff, which she called a “huge honor…to wear the red, white, and blue at an event like that.” 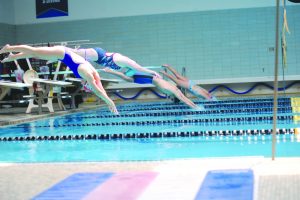 The Colonel Swim Camp dedicates a day to each swimming stroke. On Wednesday, campers learned the proper breaststroke form. Before breaking for lunch, groups practiced their take offs. (Photo by Derek Brightwell)

Those experiences, Holman says, translate well for working at a camp like this.

“I think the biggest impact really is gaining understanding that all of those swimmers, they all started at the same place as these swimmers,” she said. “If you haven’t been around them and you haven’t had the chance to get to know some of them, you put them on a pedestal and think they have some super power or some special thing that put them where they were. But really, at the end of the day, it’s a lot of the same hard work that everyone else is doing, and it’s just a great belief in themselves.

“I think the biggest impact that I can have now having had that experience is sharing some of those stories and helping the kids understand that it’s a possibility for them to do that, too.”

In addition to the Olympic pedigree she offers, Holman, and Maggard, contribute to the “family feel” of the camp, according to Dean Brownley. All of the coaches involved in the camp, including Danville-native Katy Freeman, who was unable to participate as much this year due to health issues, have strong ties to the Danville swimming community.

I love Centre College, I love Danville, Ky. We love North Carolina, it’s great, but I’ve been blessed to travel all over the place through the sport of swimming, and there’s no small town anywhere like Danville, Ky.,” Holman said of returning to Danville. “So, it warms my heart to be back here. I spent a lot of years with a lot of kids in this community, building a program here and building the swimming culture in this area. To be able to come back and give back, I just love it.”

The camp draws students from all across the state of Kentucky, with kids coming from Louisville, Lexington, Murray, and parts of Northern Kentucky. But it also reaches out of state with campers from West Virginia, Tennessee, and Indiana. In building relationships with young and upcoming swimmers throughout the state and region, the Centre College coaches hope that the camp can also be used as a recruiting tool.

The five day camp, which concludes Thursday, is all about learning the proper techniques of each swimming stroke. Each day is dedicated to its own stroke, with the coaches teaching the proper form and making sure the students are getting it right. But it’s not all about swimming. 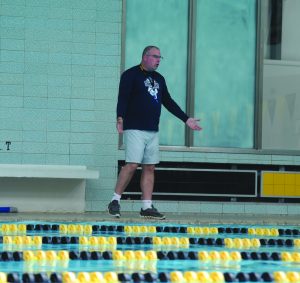 “In the evenings, to be honest, we just have fun, Brownley said. “It has nothing to do with swimming. We played kickball as a camp one night. We played capture the flag. We’ll do a scavenger hunt. I think in a day and age where phones and social devices have taken over for kids, they need to learn how to play again.

“That’s something that when Sarah and I started this camp 16 years ago, that was something we wanted to focus on. Teaching the kids how to just get out and play. Not worry about coaches run it or referees or whatever. Just get out and have fun.”

For Holman, the camp just gives her another opportunity to coach, something she has a strong passion for.

“I think my favorite thing about coaching is when the light bulb goes off for a kid and they realize they can do it,” the Davidson assistant coach said. “They realize they have the potential. Not that that’s something that I think that’s something we, as coaches, can give them, but sometimes maybe we have the right words or we have something different we can show them about the stroke or we have a fresh perspective. I think we can help turn the key, and they open the door.”