June 7, the day after the 75th Anniversary of D-Day, Jeff Hohman gave Danville Rotarians a presentation highlighting the efforts of Honor Flights KY. All honor flights are conducted by a non-profit organization dedicated to transporting as many World War II, Korean and Vietnam veterans as possible to see the Washington, D.C., memorials of their respective wars.

Jeff Hohman is one of the Honor Flight KY founders. He served the organization as president of the seven-member board until January of this year. Hohman continues to be active as a volunteer and will serve as flight director for the Touchstone Energy Cooperative’s flight in September.

The honor flights last one day and are provided at no cost to the veterans. The first such flight occurred on May 21, 2005. On that occasion, six small planes flew 12 veterans to see the World War II memorial.

The 16 Touchstone Energy Cooperatives, including Inter-County Energy, have been sponsoring honor flights annually since 2011. 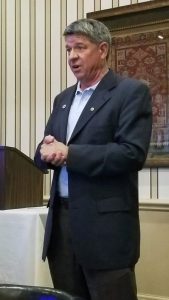 Hohman noted that on the 75th anniversary of D-Day events in Normandy France, there was only a small contingent of WWII veterans in attendance. It may be the last major anniversary, because the Department of Veterans’ Affairs estimates that only 500,000 WWII veterans were alive in late 2018.  Perhaps 300,000 are alive today and less than 87,000 will be alive in 2024 for the 80th Anniversary. Those survivors will all be over 100 years old.

Each Honor Flight KY travels on an American Air charter. Charters are used to allow for special handling (wheelchairs and unhurried exits). The current total price per flight is approximately $100,000, up from $60,000 in 2015, resulting in an average cost per person of $630 (75 veterans plus 75 volunteer guardians, plus 10 medical and support staff). The support staff manages 30-40 wheelchairs, medical supplies and coolers of water. There are three or four flights each year, depending on available funds. Sponsors like Inter-County Energy cover a large part of the cost. The balance is made up by payments from Guardians ($500 each) and other donations.

The flights depart from Lexington’s Bluegrass Airport between 7:30 and 8:00 a.m. and land at Reagan International Airport about 9:30 am. After landing in D.C., the airplane is given a water cannon salute by fire trucks, and the veterans are met by cheering crowds.

Throughout the day in D.C., the veterans are treated like rock stars. After departing Reagan International Airport, the veterans and their guardians board luxury buses staffed with tour guides that keep everybody informed and answer questions.

The tour continues to the Korean and Vietnam memorials. The veterans also visit Arlington National Cemetery to witness the Changing of the Guard at the Tomb of the Unknown Soldier. Honor-flight veterans lay a wreath at the Tomb of the Unknown Soldier. The veterans also tour the Marine Corps War Memorial (best known as “Iwo Jima”), the Air Force Memorial and the Women’s Memorial.

Honor flights arrive back at Bluegrass Airport around 9 p.m. Each Honor Flight is met with a rousing welcome by everyone in the airport. “The folks at Bluegrass Field go above and beyond for our flights and I can’t tell you how much we appreciate that,” said Hohman.

The Kids Can Bike camp, being held this week for students participating with the Kids Can Do program, is teaching... read more