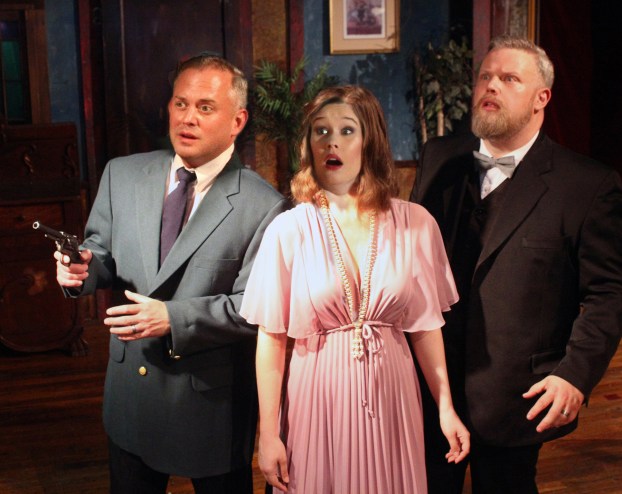 Review: Pioneer Playhouse gets wild and frantic with ‘Kong’s Night Out’

Pioneer Playhouse is celebrating its 70th year of theater under the stars in 2019, and for the first play of the season they chose one about the theater biz itself, although with an interesting twist.

The plot of “Kong’s Night Out,” as you might have guessed from the name, draws heavily on the 1933 classic film “King Kong.” The play concerns Myron Siegel (Eric Seale), a down-on-his-luck theater producer trying to stage one last play that will hopefully turn things around and recoup his exuberant mother’s (Patricia Hammond) hefty investment. Siegel’s extended family has similar dreams of Broadway success. His wife Bertrille (Brittany Polk) has grand aspirations of stardom beyond her husband’s tawdry productions. He’s also been charged with watching over his niece Daisy (Jessa DeLuca), a plucky, aw-shucks out-of-towner looking to make it as an actress in the Big Apple.

“Kong’s Night Out” intersects with the seminal RKO monster movie in Siegel’s relationship with his nemesis, filmmaker Carl Denham (Micah Stewart-Wilcox), who has a habit of interfering in all of Siegel’s affairs. When Denham announces a mysterious attraction at the venue directly across from Siegle’s opening, the fun really starts. We are also introduced to Denham’s blonde starlet, Ann Farrow (Katherine Rose Reardon) and her fiancé, the brave but dim-witted Jack Driscoll (Chandler Stephenson), who retell for the audience the odd and fantastical circumstances surrounding Denham’s new spectacle, including the tale of a voyage to a far-away island filled with peril and wondrous creatures. Of course, Siegel and the gang hatch a plot to steal Denham’s secret, show-stopping attraction.

That’s where “Kong’s Night Out” really shines: when it’s hinting and nodding and winking to the audience. The character of King Kong is ingrained in pop culture to such a degree that even those who haven’t seen the 1933 movie — or its two lackluster remakes — are aware of his story. The play slyly dances around the edges of that story in the first act, casually dropping references and allusions. By the end of the play, though, the events of “King Kong” are front and center. As the giant ape terrorizes Manhattan, we stay in Siegel’s hotel room, where the shenanigans, double-crosses, and mistaken identities culminate in a zany conclusion.

But aside from its “King Kong” influenced plot, the play is a fine example of a fun, fast-paced comedy that’s filled with the tropes of the cinema of that era. The script is rife with Howard Hawks-esque dialogue, double-entendres, and sexual innuendo, and all the actors really dive in. My favorite character in the play was Little Willie (Drew Sutherland), Siegel’s confidant and hired muscle—or “henchman,” as one character puts it. He has a running bit that I really enjoyed about trying to learn new words daily, comically interjecting them into his conversations. A hefty amount of the laughs come from the character of Sig Higginbottom (Jesse Smith), a Hungarian financier helping to bankroll Siegel’s play. He’s over the top, providing most of the play’s slapstick, with his hammed-up accent and physical comedy.

Director Anthony R. Haigh prepared all the actors well for the high-energy wackiness, and although I enjoyed all the performances, the standout for me was recent Centre College graduate Jessa DeLuca as Daisy. It’s DeLuca’s first professional performance, and she didn’t seem to miss a beat, nailing the quick dialogue and embracing her character’s turn from wide-eyed, fish-out-of-water to confident heroine by play’s end.

“Kong’s Night Out” is a must see for fans of the King Kong movies, or just anyone who’s interested in a wild, frantic comedy set in the world of 1930s New York.

David Carrier is a contributing columnist who also writes for Danville Living magazine. He lives in Stanford.

For the Community Arts Center, third time really is a charm. Marketing and Development Director Kate Snyder had applied for... read more