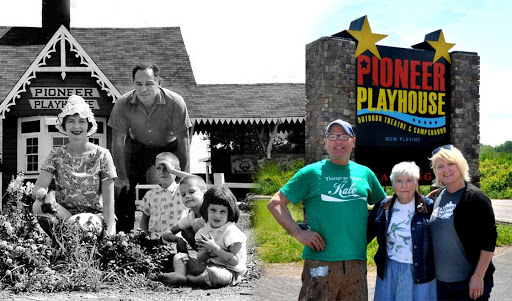 At left, Charlotte, Eben, Eben Jr., Robby and the late Holly Henson in a vintage photo at Pioneer Playhouse, taken before Heather was born. At right, a recent picture of Robby, Charlotte and Heather Henson. (Image contributed)

70 Years of Pioneer Playhouse at Lunch with the Arts

The Community Arts Center invites you to join in celebrating 70 years of Pioneer Playhouse’s theatrical excellence. Managing Director Heather Henson and Artistic Director Robby Henson will be on hand for Lunch with the Arts on June 19 to discuss the playhouse’s vibrant history.

They will share memories and talk about the challenges of keeping an outdoor summer theatre going for seven decades. They will also highlight the current season, giving a preview of the third show in this year’s line-up, “Breaking Up With Elvis,” which was written by Robby Henson.

Holding the distinction as Kentucky’s Oldest Outdoor Theatre, Pioneer Playhouse was founded in 1950 by Eben C. Henson and his wife Charlotte. It has been a significant presence in the Danville and Boyle County community since its inception. The playhouse has served as a school of drama, becoming a training ground for many Hollywood stars, including John Travolta, Lee Majors, Bo Hopkins and Jim Varney.  More than 3,000 aspiring actors have appeared on the stage since Eben Henson turned an empty field into a theatre complex.

Dubbed the “granddaddy” of Kentucky outdoor dramas, Pioneer Playhouse was instrumental in pioneering the outdoor theatre movement in Kentucky. By an act of the Legislature in 1962, it was accorded the legal status of State Theatre, becoming the first theatre so designated in the nation. It was during this time the New York trade magazines lauded the playhouse as the “King of Summer Stocks.” It was also the first Governor’s School for the Arts in the state.

Heather Henson is also an award-winning author of books for young readers, including “That Book Woman,” which has been published in several languages around the world.  After living in New York City for many years, she returned to her hometown of Danville with her husband and three children.

Robby Henson is also a critically acclaimed filmmaker of such movies as “Pharaoh’s Army,” starring Kris Kristofferson, Chris Cooper and Patricia Clarkson, and “The Badge,” starring Billy Bob Thornton and Patricia Arquette.  His original plays have been performed at the playhouse and at Lyric Theatre in Lexington.  After living in L.A. for many years, he returned to Danville.  He teaches film studies at the University of kentucky and directs the award-winning Voices Inside Inmate Playwriting program at Northpoint Training Center.

“Breaking Up with Elvis,” which goes up July 9-July 20,  is part of the Kentucky Voices series of original plays Pioneer Playhouse has been producing for 11 years to celebrate some aspect of Kentucky history and heritage.  This play was inspired by the “Elvis concert that never was” at Lexington’s Rupp Arena in 1977.

The upcoming Lunch with the Arts calendar includes the following presenters:

If you would like to sponsor a Lunch with the Arts program, contact Niki Kinkead at: director@communityartscenter.net

Mark your calendar and check the Advocate Messenger or the Community Arts Center’s website for additional information as the date approaches.

Lunch with the Arts featuring Heather and Robby Henson will be noon-1 p.m. June 19 at the Community Arts Center. Cost is $5 at the door; $3 for students.