LEXINGTON — Joni House, the manager of Perryville Battlefield State Historic Site, was  honored for her preservation work by the American Battlefield Trust during its recent annual conference in Lexington.

The Kentucky State Parks were also recognized with a State Preservation Leadership Award from the trust. 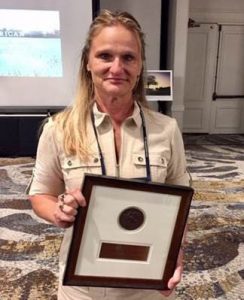 House received the Shelby Foote Preservation Legacy Award for her work at Perryville. The trust noted that House has overseen “the steady preservation of that bluegrass jewel and significantly advanced public understanding of the compatibility of battlefield preservation and native habitat restoration.”

She received her award on May 30 during an awards luncheon. Perryville Battlefield is the site of the largest Civil War battle in Kentucky in 1862. During the last few years, the park has planted native plants to attract more wildlife.

House has worked at Perryville Battlefield since 2004, serving as a historic preservation coordinator. She was named park manager in early 2018. House also serves as president of the Kentucky Civil War Sites Association.

House, a native of Nicholasville, earned a degree in history from Kentucky State University and a master’s degree from the University of Kentucky in historic preservation.

STAFF REPORT The Advocate-Messenger The following people were indicted by a Casey County grand jury on May 30: • Lowell... read more