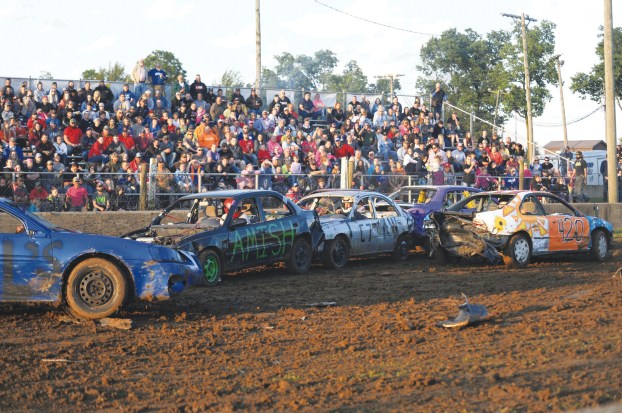 After the field at was sprayed with water, the action commenced and cars pummeled into each other Thursday night at the Boyle County Fair. Cars were customized by painted numbers and words. (Photo by Derek Brightwell)

As a recording of the Star Spangled Banner played over an intercom system, a tractor drove around spraying water on an unimposing dirt field surrounded by concrete barriers. Not long after the final note was belted out, that field became a chaotic pit, strewn with discarded car parts and objects that used to be vehicles, but now only barely resembled them. It was a muddy, brutal, beautiful mess. 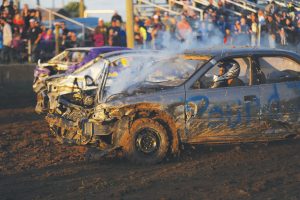 The carnage causes smoke to billow from the motor of participants in the derby. (Photo by Derek Brightwell)

Less than a minute into the first heat of the demolition derby at the Boyle County Fair, a car slammed into one of the barriers, deploying its airbag. Given what followed, it seemed like a quaint reminder of normal driving behavior.

With tires spinning out, kicking mud into the air and onto spectators who dared get close enough, like a Gallagher comedy set from the 1980’s, the drivers of the cars in the B&M Motorsports demolition derby slammed into each other, and the concrete wall, all in the pursuit of being the last car moving and a first place prize of $1200.

“There’s a lot of smashing going on,” Austin Tipton from Winchester, Ky. said before the event. “A lot of people you’d call ‘sandbaggers’ are the ones who get to the money though, because they don’t get hotheaded.”

Teams came in from all over the state of Kentucky, some even from out of state, to participate. Participants I spoke with before the event started told me that they would travel as far as West Virginia to take part in them. One person nearby joked, when I asked Tipton how far he’s gone to be in derbies, “You mean how far in debt?” It is clearly a passion project.

It was chaotic, it was insanity, but it was beautiful and thrilling. Cars, imperfect and discarded, but drivable and at least recognizable as cars, are turned into mangled, smoking messes as bleachers full of fans cheer and shout with every high impact collision. Firefighters stand nearby in case, as happened in the second heat of the small cars event, one catches fire.

For many of the drivers, and the teams involved in building these cars to withstand the carnage the drivers put them through, demolition derbies are a family legacy. Everybody that I spoke with about the derby said that they got into because their dad had been doing it for as long as they could remember. The portrait of America, working on a junker car with your father, is twisted and morphed, like the cars in the derby itself, into something new and primal.

As the cars roll in before the start, parking one-by-one along the barrier facing the crowd, they look like normal cars. Modifications are made, obviously, like the removal of all window glass. Some cars have one or two spare tires on. Some cars hastily painted with a number, or in one case simply “AMISH”, to identify themselves to the announcer and results-keeper. Some cars were painted with much more care, the team putting its personality into the paintjob.

In the second heat of the night, one car stood out to everybody. Painted mostly purple and numbered seven, the car looked road-ready. The pristine vehicle immediately got everybody’s attention, including the other drivers as it appeared to be the target of everyone as soon as the heat started. 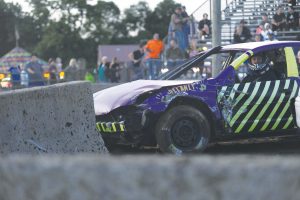 A pristine car will turn more than spectators’ heads, it’ll also make you a target.(Photo by Derek Brightwell)

In the first heat, one driver was stuck in the corner, white smoke billowing from the engine as he desperately tried to get moving again. As he finally got his car moving, it merely hit the other wall. For several minutes he fought with his car, rocking back and forth as he cranked the wheel with every bit of energy he had, and ultimately got moving again. But in the end, his was one of many cars that sat, unmoving, in the center of the track.

It would be easy to portray the demolition derby as a barbaric event. After all, it can be boiled down to “cars ramming into each other until only one can drive”. But its simplicity is where the beauty of it lies. One doesn’t have to be an expert in the sport to understand what they are seeing on the track. There are nuances, strategies, tactics, to be sure, but it’s the carnage, the destruction of the cars involved, that draws audiences. Football and combat sports like mixed martial arts and boxing thrive on that similar allure, but with the rules put into place against deliberately hitting the driver’s-side door head on, demolition derbies offer that brutality in a much safer way.

During the caution stoppages of the derby, where drivers of cars who have been eliminated can safely exit their vehicles, you can examine the track, littered with bumpers and fenders, and various smaller bits of debris from the cars. Some drivers get out and check on opponents, or consult with each other. Once the race is back on, however, they are back at each other, driving backwards as fast as they can into each other, or trying to systematically pick apart the other cars.

“You wanna take good shots,” Justin Gaffney from Lancaster, Ky. said of the strategy. “Pick wheels off. If you see a car back going down, jump on it and make it go down even further.”

There’s an art to the building of a car to enter in a derby, as well as knowing which cars to look for.

“Good ones!” Tipton joked when asked which cars make the best to enter. “Mainly Camrys. They’re really good cars. They’re pretty hard in the front, easy to build and not hard to find out to fix them. They’re very reliable.”

For the people involved in the sport, family, friends, and fun are what keep them putting the time and money into it.

With a sunset and a glowing Ferris wheel creating a picturesque backdrop, all of the attention of the night was focused on the cars on the track, with bumpers dangling from the front and back and smoke and flames coming out of the engines, as they collided and spun out. And every single face had a smile on it.

A driver attempts to maneuver while being hit by other contestants. (Photo by Derek Brightwell)

Firefighters from the Danville Fire Department stand nearby the competition so if a car catches fire, which happened during the second heat, so they can spring into action and quickly get it under control. (Photo by Derek Brightwell)

The demolition derby at the Boyle County Fair is about more than ramming cars into each other, there is strategy involved in maneuvering so they’re the last car driving. (Photo by Derek Brightwell)

A pristine car will turn more than spectators’ heads, it’ll also make you a target.(Photo by Derek Brightwell)

LEXINGTON — In a practice the week before the rescheduled rematch between Boyle County and Male in the quarterfinals of... read more