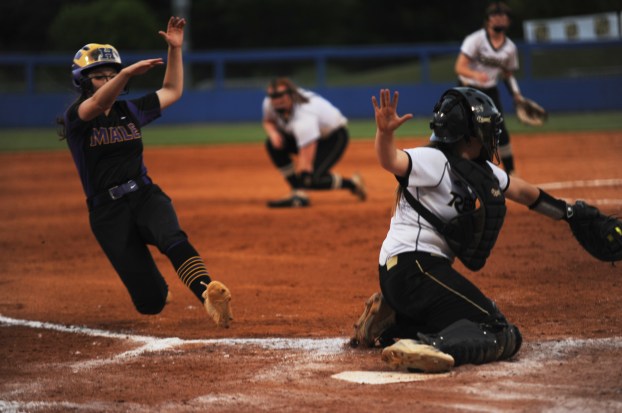 Emily Glasscock fields Hailey Cannon’s throw to get the Male lead runner with the bases loaded. (Photo by Derek Brightwell)

LEXINGTON — In a practice the week before the rescheduled rematch between Boyle County and Male in the quarterfinals of the KHSAA Softball State Tournament, Boyle coach Brian Deem said you weren’t going to shut a team like Male down. But for three innings, Katy Grace Chadwell did just that. The problem was that her counterpart, Male pitcher Kelsie Houchens was perfect.

“Kelsie was strong tonight. We had problems being able to turn on her screwball,” Deem said of the perfect game. “If we’re not going to be able to do something like and put the ball in play, there’s going to be a lot of other teams in this tournament that are going to struggle with her.”

For all seven innings of the 4-0 Male victory, Boyle County failed to get a baserunner, while only allowing seven to the Bulldogs. 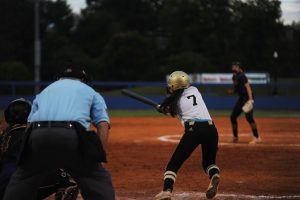 “I couldn’t be more proud of my kids. These kids did everything I asked,” Deem said after the game.

Both pitchers came on dominant, with both of them carrying perfect games into the fourth inning. Through three, the only offense that either fanbase had to cheer for was a nine pitch at bat that saw Madison Baker hit a home run length line drive just foul.

“I thought Katy pitched a fantastic game. Kelsie for them was just on,” Deem said of the pitching performances. “We struggled at the plate being able to make our adjustments. We had a couple of well hit balls, and they made great plays.”

But Male started off the bottom of the fourth with bloop single into right field for Madison McCoy, the game’s first hit. Megan Konemann added a hard line drive double to left center and gave Male runners on second and third with nobody out. After retiring the next two batters, it looked as though Chadwell would escape the inning unscathed. But Jaelyn Sanders put a two strike pitch over the right field wall to clear the bases and give Male 3-0 lead. The Bulldogs would add an insurance run in the sixth via a Lily Davis double, but they would not need it.

“I didn’t think (Katy) got rattled with it,” Deem said of the first two hits on the game. “They’re a well-hitting team and I think the McCoy kid got the base hit, just finds a way to get over our second baseman. The next girl got the base hit to left center. We were able to barrel down and get ourselves to two outs, and a 2-2 count on Jaelyn, but Jaelyn’s just that good of a hitter and was able to barrel it up and put it out.

“You miss a spot against Jaelyn and she’s going to do what she did and she punished us for it.” 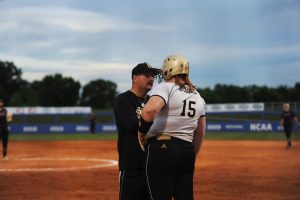 With two strikes in her final at bat of her Rebel career, Boyle coach Brian Deem tells Katy Grace Chadwell he is proud of her.(Photo by Derek Brightwell)

Deem admitted that it was his decision to pitch to Sanders in that spot, and that he probably shouldn’t have. Her next at bat, also with two on, he gave her the intentional pass.

“I’ll take the blame for that. I made a call that I look back on and regret,” Deem said. “I probably should’ve put her on. That’s my fault. I have a lot of faith in Katy, and my pitching coach. That’s my call to make and I said let’s get after it. Felt like we could get her out again, just the way Katy’s been throwing. Jaelyn made us pay for it.”

Houchens was dominant the entire game. Striking out 10 of the 21 batters she faced, and rarely allowing hard contact to those she didn’t punch out. In the two games she’s faced the Rebels, she has only allowed one hit.

Chadwell, finished her Boyle County career strong as well. Allowing only six hits, with one intentional walk and four strike outs against Male, who is ranked third nationally. She also earned KHSAA All-Tournament team honors, another in the list of awards the senior has racked up this postseason. In her last at bat, and the last at bat of the game, Deem called time out with two strikes to pull her aside.

“I just told her, I said ‘I’m so proud of you and what you’ve done’,” Deem said of the moment he shared with his senior leader. “‘This at bat doesn’t define you You go up there and compete, sit back and if you get a pitch that you like, go after it. You’ve had a hell of a year. You’ve got freedom to go out and do what you want to do.’”

With the loss, Boyle’s season ends with a 31-7 record, while Male improves to 37-0 heading into the rest of tournament play.

“I’m proud of my kids, I’m tickled to death with how they competed tonight. How they showed themselves and they did an outstanding job representing Boyle County and representing themselves and our community,” Deem said of his team, who will return everybody except Chadwell.

“I told them this is a memory they’re going to have for a lifetime. I told them all, hopefully this will light your fire and over the summer and fall and offseason, making sure we can get back here and are able to compete and put ourselves in this position again.”

By LARRY VAUGHT Contributing Writer   Growing up in Paintsville, Kash Daniel was a three-sport standout and now has become... read more