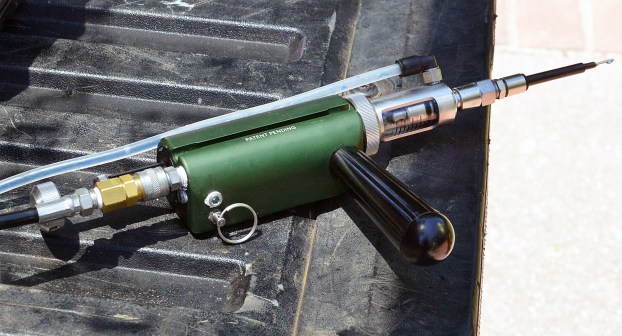 A local group secured funding to bring an expert in with one goal in mind: Saving Boyle’s ash

A towering, 75-year-old tree at Constitution Square Park was given what is hoped to be a life-saving injection Friday afternoon, thanks in part to a study funded by the Garden Club of Danville. 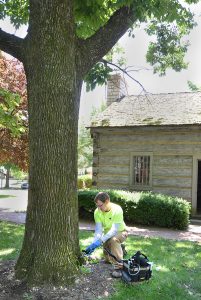 Chris Bullock injects an ash tree at Constitution Square Park Friday afternoon, in hopes of saving the tree from being damaged further by an emerald ash borer infestation. (Photo by Robin Hart)

The ash tree, located near the center of Constitution Square, was diagnosed as being infected with emerald ash borer, which was causing the tree to lose limbs, and would eventually cause the tree to die, according to a report by arborist Dave Leonard. In May, Leonard evaluated each tree at the park. He submitted his report to the garden club on each tree’s condition and made suggestions as to what would be the best ways to maintain each of them.

According to garden club president Pam Leinauer, Boyle County Fiscal Court approved hiring Leonard’s company to treat the tree with a special pesticide because it wants to help keep the trees healthy.

On Friday, plant health care technician Chris Bullock came to Danville and brought equipment to inject the tree. Bullock said the emerald ash borer is a beetle that originated in Asia and entered the United States several years ago. It’s infesting the ash tree population and is spreading.

He said he’s never seen an emerald ash borer because they burrow under the bark, lay their eggs and eat the growing tissue of the tree. This is what causes the tree limbs to lose water and nutrients, eventually causing them to die, he explained.

Emerald ash borers tend to damage the tree canopy first, and once it’s about one-third destroyed, there’s not much that can be done to save the tree. At that point, it’s usually better to have it removed, Bullock said.

The process Bullock used to inject the tree involved drilling several holes around the base of the tree two to three inches deep near the  root spread. He then taps in a small plastic hollow peg and uses a specialized “syringe” to inject the pesticide.

Bullock said the tree’s natural fluid intake system will disperse the pesticide up to the top branches and back down, killing the older beetles and the eggs under the bark.

Leinhaur said she recently had an ash tree given the same treatment at her home. The cost runs about $10 per inch of diameter of the infected tree, which was $150 for her tree. She said it was much less expensive treating the tree than spending $2,000 to have it removed.

Once holes are drilled and plasic pegs are tapped into the tree, Chris Bullock uses a specialized syringe to inject pesticide into the tree’s living tissue. (Photo by Robin Hart)

To inject the ash tree at Constitution Park, several holds are drilled around the base of the tree. (Photo by Robin Hart)
You Might Like

Boyle County Board of Education could decide next month on 15-cent increases for breakfasts and lunches at the middle and... read more