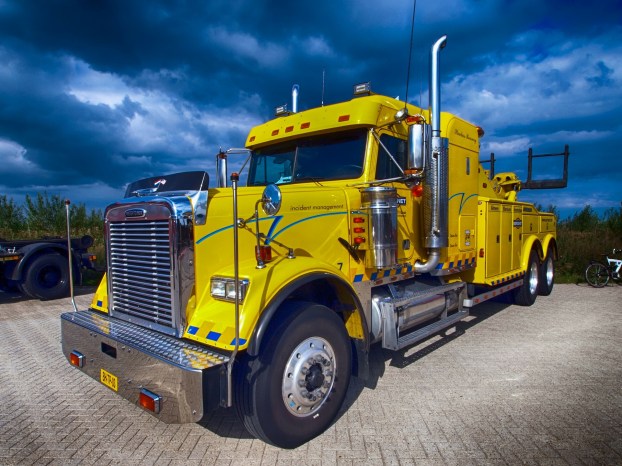 On this day in 1979 the dominant front page headlines were for stories about the ongoing independent truckers strike and how gasoline supplies were dwindling in the Boyle County area.

Independent truckers were protesting skyrocketing diesel fuel prices by blocking highways and oil terminals. The protest, which was slow to take hold during its first few weeks, had begun to have an economic impact as fresh produce piled up in warehouses and picket lines slowed business at fuel terminals.

The National Independent Truckers Association President Mike Parkhurst said, “The shutdown is just beginning to jell. The only way that truckers get anything — and it’s disgusting — is to shut down.”

Later in the week, the gas supply at Hollon Mills Main Street Phillips 66 Service station was “poor at best,” said Dick Mills at the time.

While several local service stations were limiting gasoline purchases, Mills said his station was planning to pump gas until it was gone — which he predicted would be by the end of that day.

Eddie’s Chevron Service Center at Main and Fourth streets was already out of gas, according to Eddie Ensslin. He was expecting to have more gas delivered by the company’s own trucks the following week, but dependable delivery of fuel would not be on schedule, he added.

As the local gas supplies tightened, many stations limited the amount people could purchase.

Levi Engle of Engle’s Service Station on Lebanon Road in Mitchellsburg said, “The situation is pretty bad. We have a little gas — not much.” Engle said he was trying to take care of his regular customers, but was limiting others to $3 gas purchases.

“I think the government is trying to starve the little people,” Engle said in the article. His station received a 25% cutback from the 1978 June allotment of 9,000 gallons.

In Junction City, Carol Gipson, of Gipson’s Ashland Service Station said she was also trying to give her regular customers the amount of gas that they needed, but limited other gasoline customers to $5 purchases.

Danville City Manager Sam Garnett said the city seemed to be in pretty good shape in regards to having enough fuel. However, he said that they were also using as few vehicles as possible.

In order to protect the truckers in Kentucky who wanted to continue delivering fuel, Gov. Julian Carroll ordered the state police to protect them and assigned the National Guard to secure fuel-storage areas in Somerset and Owensboro. “We will not tolerate any violence,” Carroll said in another article on the front page of The Advocate-Messenger.

Four hundred twenty National Guardsmen were assigned to the storage areas in Somerset and Owensboro, which were two of the trouble spots in the spreading trucker protest.

to and from refineries and bulk plants in Kentucky.

“Without a combination of citizen and executive action, the gasoline supply problem could reach a critical point,” Gov. Carroll said.

On the national level, President Jimmy Carter ordered an end to the federal rule that gave farmers priority in obtaining diesel fuel. He started the rule in May to insure farmers would have enough diesel fuel for spring plowing and planting. Now, however, he was suspending the rule to ease diesel shortages for truckers and to help mollify the strikers. He also vowed to do whatever was necessary to protect truckers who wanted to return to work.

A local group secured funding to bring an expert in with one goal in mind: Saving Boyle’s ash

A towering, 75-year-old tree at Constitution Square Park was given what is hoped to be a life-saving injection Friday afternoon,... read more