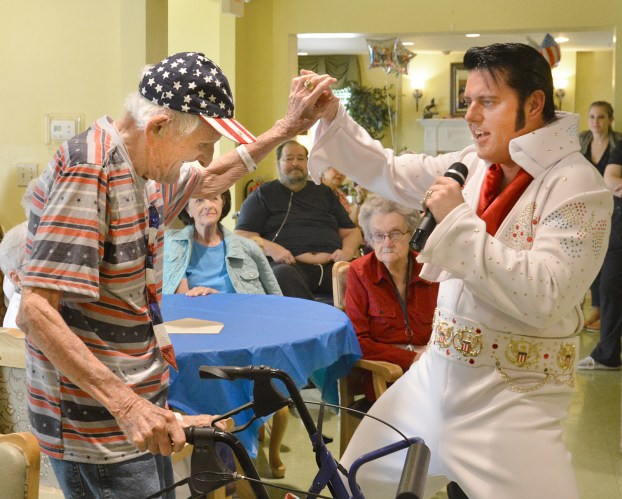 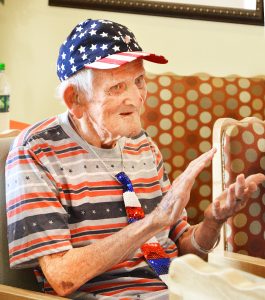 Ernie Blanchet is 106 years old — and still rocking it. Celebrating his birthday at Charleston Health Care Assisted Living on Monday, Blanchet was the life of the party, boogying along to a lively performance by rock-and-roll icon Elvis.

Blanchet is known as much for his agility on the dance floor as he is for his service in World War II. “He loves to tell stories,” Sarah Selby, a resident assistant, says, explaining that he often recounts tales of being a submarine chaser during his time in the service.

Besides being an avid storyteller, Blanchet is a well-known figure on karaoke night, dancing often with his good friend, Ann Glass, who speaks highly of him.

“He’s definitely a ladies’ man,” Shelby Fields laughs. She has been his aid for over a year. “We were in the hospital the other day, and he was flirting with all the nurses.”

For the celebration, Blanchet was decked out in a red-white-and-blue ensemble. His hat commemorated his service in the Navy, and a bedazzled tie betrayed his fun-loving, infectious good nature. Following an enthusiastic rendition of a medley of Gospel songs, Blanchet stood and shouted happily, “I’m back to life! I’m back to life!”

Blanchet was surrounded by friends and caregivers for the celebration. “That’s his family,” Phillips says.

Ernie Blanchet admires a stuffed animal he was just given as “Elvis” sang “Be My Teddy Bear,” as she special friend, Ann Glass watches. (Photo by Robin Hart)

Blanchet admires a stuffed animal he was just given as Elvis sang “Be My Teddy Bear.” His special friend Ann Glass watches. (Photo by Robin Hart)

Shepherd’s House accepted more than 100 donated bikes for area kids, and set them up on site Friday outside of... read more