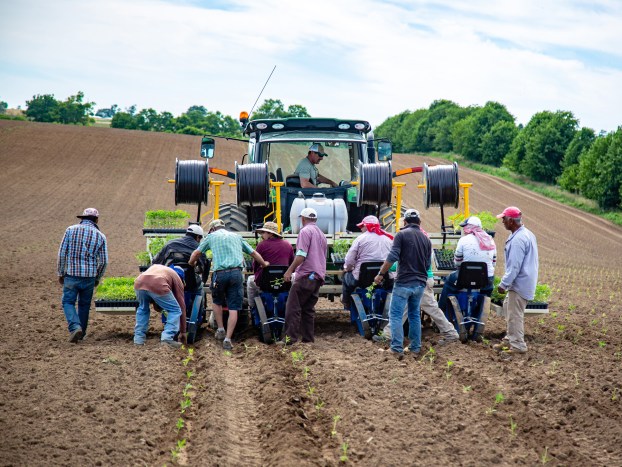 Boyle farmer never knows what each day has in store

One day last week, on a sunny but fairly mild day for June, Stephen Lester found himself in the dirt, trying to fix the connection between a tractor and a planter. A rock in the field had kicked up, damaging the connection and throwing the planter off-kilter. 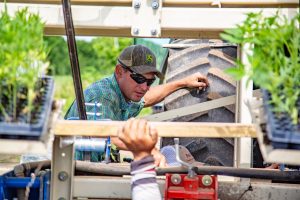 Lester helps examine a problem on a tractor, after a rock was kicked up, causing damage. (Photo by Ben Kleppinger)

Lester is a farmer — the manager, in fact, for Kentucky Heritage Hemp Company. The farm Lester manages on Bluegrass Pike in Boyle County was bought by Peterson Farms earlier this year and is now being used to essentially double the company’s hemp acreage.

Lester’s job involves so many different duties, he’s never sure what he’ll be doing next. Just recently, he had a day where he drove a semi-truck to Lexington and Bardstown, bringing loads of hemp seedlings back to Boyle. Another day, there was an issue with a driver’s license for one of the 30 or so H-2A temporary agriculture workers employed at the farm. After he was done working on the damaged tractor Friday, he was going to be meeting with an “irrigation genius” who had traveled from Texas to help the farm gets its irrigation system up and running.

Lester also drives the huge, GPS-guided tractors that plow, seed and cultivate the farm’s organic fields, guides repairs and maintenance, makes sure the farm house is prepped for H-2A workers to live in — he does whatever it takes that day to keep things running smoothly.

The toughest part of it all? “The hardest part of my day is 7 a.m., when I’ve got all these guys coming in and I have to direct them everywhere,” he said. “… This morning, my phone died before 10 o’clock. It was non-stop ringing.”

“It’s a whole lot simpler when everybody else goes home and I’m still here, running late night, when it’s quiet and I can think,” Lester continued. “… We usually work until at least 10 every night this time of year, just trying to get everything planted. It might be midnight. If it’s going to rain, we’ll work longer.”

Out of the farm’s 750 acres, about 200 are being planted with organic hemp — a crop that was illegal to grow only a few years ago, due to its genetic proximity to marijuana.

Some farmers are “plumb against it” but “some are for it, some think it’s a great thing,” Lester said. “There’s a whole lot of people that have used the product and have really seen a good result from it.”

Kentucky Heritage’s hemp will spend the next few months growing up, then it will be harvested and transported to Nelson County, where Peterson Farms has an oil extraction business, according to Bill Peterson, an owner. From there, the CBD oils extracted from the plants will be sold to Charlotte’s Web, considered to be “the number-one seller of CBD products in the U.S. at this point,” Peterson said.

Lester stares down a row as it’s being planted to make sure the lines of plants and irrigation tubes are going down straight. (Photo by Ben Kleppinger)

He estimated there’s a 40-50 percent chance if you buy a Charlotte’s Web product in Kentucky that the CBD came from a Peterson Farms operation. 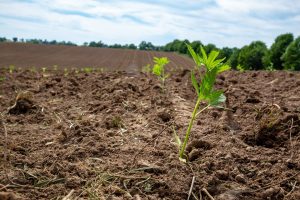 Lester said the Kentucky Heritage farm is growing organic because “the hemp companies want it organic” and “it’s worth more money.”

Growing organic means you can’t use chemicals on the fields, which makes the whole process “a lot harder.”

“You cannot spray any weed killer anywhere, so you’ve got to either hoe it out or cultivate it with a tractor with a plow of some sort,” he said.

Fields can only be certified organic by the Kentucky Department of Agriculture once they haven’t been treated with any chemicals for at least three years. Since the farm was previously used for pasture and grazing, a lot of it already is organic. What isn’t organic yet will be eventually, but it makes things awkward in the meantime.

“It’s a whole bunch of paperwork,” Lester said. If your tractor even just leaks a little fluid, you have to mark the spot and the state might come out and run tests. You can’t even use a tractor on a non-organic field, then drive it onto an organic field. Instead, you have to “wash it completely, just so there’s no residue transfer.”

Lester grew up in a farming family and said he always wanted to be a farmer growing up. “I’ve always farmed a little, just not to this scale.”

He worked for Peterson Farms for a couple years a while back, then bought the old Whitehouse Auto Parts store in Perryville. That business burned to the ground last year, and the Petersons “talked me into coming back to work for them.”

Why come back to farming? “I need to make some payments. I’m still fighting the insurance company over my business, so I’ve got to make them payments still,” Lester said half-jokingly. Then more seriously, “I like to be outside.”

Lester lived in Perryville when he was young and attended Boyle County Schools; he lives just over the line in Washington County today. His wife runs the massage business Essential Kneads in Danville, and they have three kids — 11, 6 and 20 months.

Asked if he buys organic now that he grows organic, Lester noted he doesn’t do a lot of buying to begin with because “at my house, we kill our own beef, we kill our own hogs.” He doesn’t buy organic seeds, but a lot of his family’s food — “I grow it myself.”

His wife does buy a lot of organic stuff, he adds, and he recently got on-board, too, when he found Michelob Ultra Pure Gold — organic beer.

The Danville Schools’ new superintendent has been given a positive review by the school board on her first annual evaluation.... read more