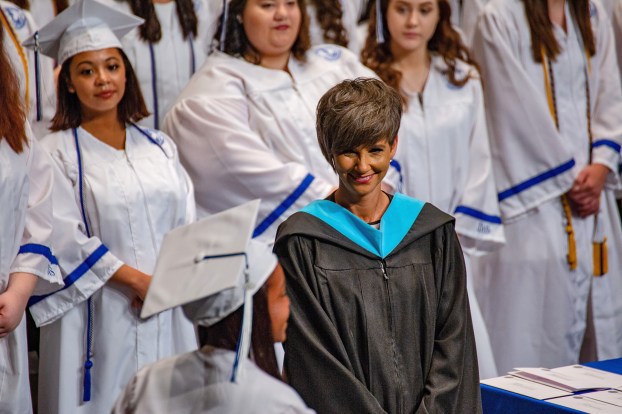 Danville High School Principal Haley Ralston smiles as graduates walk onto the stage during the school's 2019 graduation in May. Ralston will not be returning as principal next year; instead, she will be working as an education recovery leader for the state. (Photo by Ben Kleppinger)

Former DHS principal will work in ‘education recovery’ for state

Former Danville High School Principal Haley Ralston will continue working as an employee of the Danville Independent School District next year, but she will be “on loan” to the state Department of Education, Superintendent Tammy McDonald confirmed recently.

Ralston said Tuesday she will be working as an “education recovery leader” in a struggling school somewhere in Kentucky.

According to a job description for her new position, the education recovery leader, or ERL, “will be responsible for mentoring of and guidance to the principal in low-performing schools … with any and all functions relating to instructional leadership and school improvement.”

Ralston said she starts ERL training in July before heading to the school she is assigned. She could find out next week what school that will be — probably one either in the central region of the state near Louisville or one in eastern Kentucky.

“They work to try to keep people as close to home as possible, but there will be driving,” she said. “… It will be a change from being a principal and an assistant principal, and I’m looking forward to the training we’re going to get on being recovery leaders. I’m excited about it. It’s a new adventure.”

Ralston, a Danville native, was principal at DHS from November 2016 through the end of this school year. McDonald declared a vacancy in the principal position last month and the Danville school council chose former Marion County High School Principal Thad Elmore to fill the role earlier this month.

McDonald said last week Ralston would be “on loan” to the state for at least one year, possibly longer. She noted Suzanne Farmer, who was recently chosen as the next principal at Hogsett Primary School, similarly worked on loan to the state while still being a Danville Schools employee for several years.

Junction City residents and property owners will have a chance to inspect a draft of what the town’s future development... read more