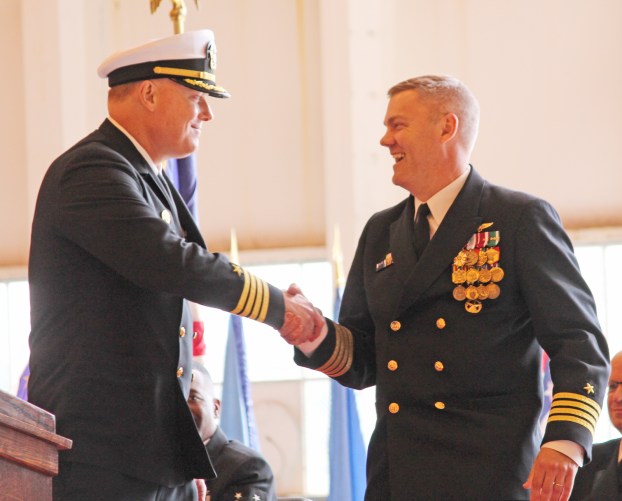 Hammond, a native of Danville, Ky, is the son of Ray Hammond and the late Carolyn Hammond, and the stepson of Cindy Hammond. Growing up the son of a college professor father and a high school librarian mother, Hammond was inspired to join the Navy because he wanted to do something different. He found further inspiration from spending an evening with Astronaut Story Musgrave (USN, Ret), a Naval Academy graduate, in the Hammond home. Armed with an interest in aviation, he applied to the U.S. Naval Academy. He credits his time at the Naval Academy with forging him into the leader he would become.

“I was a small-town Kentucky boy,” he said. “But the academy turned me into what I am. It took me from being a kid who didn’t understand anything to being someone who was goal-oriented and pushing hard to try to figure things out.”

Graduating in 1993 with a B.S. in Aerospace Engineering, Hammond was winged as a naval aviator in 1995 and went on to fly the C-2 Greyhound, racking up more than 400 arrested landings along the way.

Hammond reported to Pax River in April 2016 as the air station’s executive officer, a position that falls under the Navy’s Fleet-Up program. In that program, executive officers serve in that position for a year and a half before they “fleet up” to become the commanding officer for their command tour on the same ship or station. Hammond added that gaining knowledge of the working relationships between military, civilian, and contractor jobs was one of the biggest things that led to his success as a commanding officer and member of the Southern Maryland community.

“There are about 700 civilians in my organization, some are unionized; so having an understanding of those relationships and how they differ from the military is a huge thing I learned here,” he said.

Before retiring, Hammond recognized everyone he worked with during his years at Pax. “Whether Sailors or civilians, Pax has been wonderful to me and I’d like to thank them all for their professionalism and dedication,” he said. “And thanks to St. Mary’s county; I’ve always been treated with such respect because of my orientation with the base and the military. It’s been incredible here, one of my favorite jobs.”