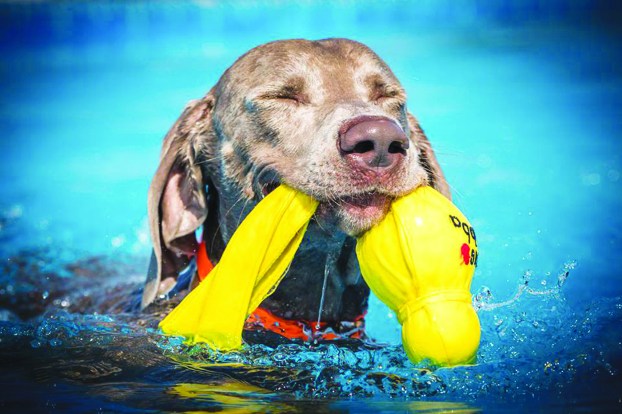 Grayson is usually one of the only Weimaraners competing in dock jumping events. Here he looks very pleased with his toy in mouth. (Photo by KJ Photography)

The path to owning a dog in the competitive scene known as DockDogs, where dogs of all different breeds jump off of a dock and into a pool or pond aiming to jump the highest or farthest, is not something that many people think about. For Boyle County deputy sheriff Taylor Bottom, it was something he had always wanted to do, even if the journey there wasn’t quite what he expected.

His three and a half year old Weimaraner, Grayson, is currently ranked second in the world in the discipline known as Speed Retrieve in his division. He is also the fastest swimming Weimaraner ever recorded. And has already earned his second consecutive invitation to the world championships. 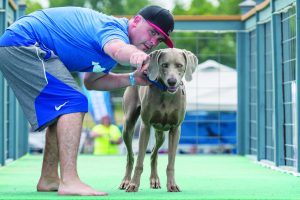 Grayson is the fastest swimming Weimaraner ever recorded in the speed retrieve discipline. (Photo by KJ Photography)

“I wanted a Weimaraner, which is the breed Grayson is, my whole childhood,” he said. “Got out of high school, was in college, and we got our first Weimaraner, she just turned 10, and I really wanted to do that with her, saw it on TV and ESPN and stuff. She just didn’t like water.

“So we got Grayson, he’s three and a half, so we got him three years ago roughly. We were hanging out in her grandfather’s pool. We jumped in, and I turned around to wipe the water from my face, and Grayson’s in the air coming at me.”

Since then, Taylor and his wife, Erika, have made up the team known as Gray Ghost, have been getting recognition not just around town, but immediately within the competitive DockDog scene. 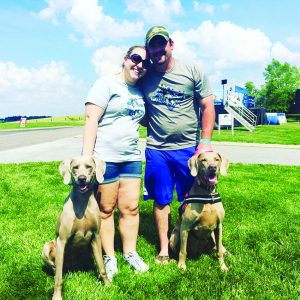 “There was an event at the Lexington Cabela’s and we were like ‘Oh this is close to us! We should get some information and show up and try.’ So we did,” Erika said about how they got involved in the sport.

“We messaged Kentucky Dock Dogs on Facebook and I didn’t know who I was talking to at the time, but it was Rob Niemer. He’s actually a former world champion in Dock Dogs and his wife Tammy Niemer, they’ve been doing it for 10 years,” Taylor added. “Super helpful. Some of the nicest people you’re ever going to meet in your life.”

At that first event, in pouring down rain, Grayson won in the discipline known as Big Air, or distance jumping, with a jump of 19-feet, five inches. Taylor said after that jump, Niemer approached them and said “I think you all should keep doing this.”

Taylor said that he didn’t have any expectations of success at that first event, just that he was hoping Grayson would get off the dock.

“The very first time we ever did that competition in Lexington, it was pouring down rain,” he said. “I’ve got a one year old Weimaraner sitting here on the dock and I sit him down and he stayed. I walk to the end of the dock, pouring down rain, there wasn’t a lot of people there, but music going. I tell him to go and he jumps 19 feet five inches in the pouring rain. So, our goal was just to get him to go off the dock. I didn’t care how far it was.”

“Yeah, most people they can just get them to jump a little bit or they take them down the ramp. But he just went for it. He went and he jumped. He didn’t care,” Erika added.

After that, the Bottoms have fully thrown themselves into the scene, joining all of the other “Tent People”, as the community have come to be known, due to the large presence of pop-up tents that are used during competitions. Before the second event they went to, they bought themselves a camper to make the journeys easier, even before having a truck that could pull it. 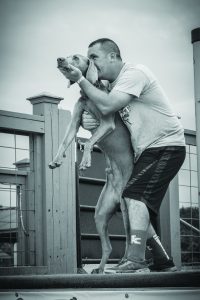 Taylor Bottom has wanted a Weimaraner ever since he was a little kid, and always wanted to compete in Dock Dogs since he saw the event on ESPN. (Photo by KJ Photography)

Grayson has made their investment pay off. Not only is he second in his division globally in Speed Retrieve, he’s also ranked well enough in every other discipline to be invited to the world championships in all three disciplines and the Iron Dog event, in which the dogs compete in every discipline in one day, triathlon style.

“He did Extreme Vertical and Iron Dog in worlds last year,” Erika said. “He did OK in Iron Dog, but you do it all in one day. And you’re running between four pools. He was doing that and I think he was a little overwhelmed by the environment.”

“If you’re doing Iron Dog, you do big air, you get two jumps in that. Then you do speed retrieve and you get two runs in that. Then you do EV, and he usually comes in at around 6-foot-6, and he can jump, his best jump ever is 7-foot-2 in the air,” Taylor added. “You got to count all of those jumps and that’s the Iron Dog, and then to turn around and do extreme vertical, which he’s already done. So they’re super tired. And I’m tired trying to figure out which pool to go to.”

To make it to the feature finals, which Grayson did in Extreme Vertical, he needed to finish in the top six in the world in his division. The divisions — named Cadet, Top Gun, and High Flier — are broken up by the dogs’ average performances. In his division, in EV as the discipline is shortened to, Grayson placed fourth in the world.

It’s not just his talent that makes Grayson special. It’s his breed as well. In a typical competition, and especially in the world championships, Grayson is usually the only Weimaraner competing, but that comes with some disadvantages.

“It’s really cool having that one breed that not a lot of people have, but sometimes you miss out on cool stuff, too,” Taylor said. “So like at the end of the year, they do breed specific awards. But you have to have 10 competing and there’s probably never going to be 10 Weimaraners competing in a year.”

But Grayson always draws attention to himself when he arrives.

“Well, first because he’s all gray. And they’re very beautiful dogs anyway, their eyes are super pretty. And just the way he carries himself he’s very friendly,” Taylor said proudly. “People always come up to him and pet him and want to pet him, and he’s very friendly. And then he gets on the dock and explodes and does something cool. A lot of the kids at the show flock to him.” 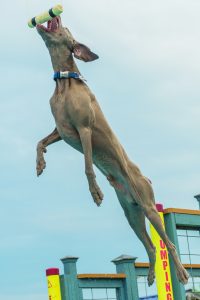 Grayson has been a natural, winning first place in his first ever event. (Photo by KJ Photography)

Since the moment they saw Grayson jump in a pool, they began training him in dock jumping. First, basic dog training standards of sit, down, and stay for the puppy. But they gradually incorporated the toy and the pool.

“Everybody starts in big air. That’s the first thing you do is big air. It’s technically the easiest. Then you move on to either speed retrieve or extreme vertical,” Taylor said. “We kind of go the big air down.”

“Well, a little,” Erika corrected, laughing. “He still needs work on big air. You can do it a couple of different ways. You can have them sit and stay and you tell them when you’re ready and they’re supposed to track it, and you get more distance because they’re chasing it through the air. Or you can do like Grayson does sometimes and just jump straight out and doesn’t look around and just beelines.

“Then you can do what’s called place and send where you take the toy and throw it in the water kind of where you want them to jump and then bring them back and let them go. But that doesn’t get a lot of what’s called pop where they’re in the air.”

Grayson has also excelled in a recent event that has been added. Dueling Dogs is “drag racing for dogs”, as Erika puts it. It’s a two dog Speed Retrieve race with a clear divider so the dogs can see each other. In his first year of that, Grayson finished second to the defending champion.

“He would’ve gotten first. He jumped, and landed in the water before the other dog,” Taylor said. “Grayson jumps in, lands. This dog is not off the dock yet, so Grayson stops and looks around like ‘where’s the other dog at?’ and waiting on her. She jumps and in and then they start swimming.”

“Got beaten by a hair. He was being a gentleman,” Erika added.

For Erika’s part, she had never thought about competitive dog aquatic sports until Taylor came along, but she has fully embraced the sport, even spending their last three wedding anniversaries at DockDogs competitions.

“It’s mostly for Grayson. I love Grayson more,” she joked.

This summer, the Bottoms are hoping to grow the sport in Boyle County and surrounding areas. During the Annual Perryville Turtle Derby, they will be holding an event called Splashin’ at the Chaplin on the weekend of July 27-28. It’s their second year of holding it, and have already raised enough sponsorship money a month and a half out. Taylor believes these events will help spread the sport he’s come to love.

“Nobody around here has ever done it. There’s people from Kentucky, but not from our area. I just thought that it’d be really cool and a lot of fun to do that,” he said. And it’s been working, he said that every day he has someone asking about when the next one will be.

They will also be holding a “Let’s Try It”, where people can learn how to do the events with handlers who’ve got experience and have a way to ease their dog into the sport.

You can find more information about Grayson and the Bottoms at Team Gray Ghost on Facebook. And for information on the Kentucky DockDogs club, they also have a Facebook. In addition to the July 27-28 events, Grayson will be in action over the Fourth of July weekend in Ashland.