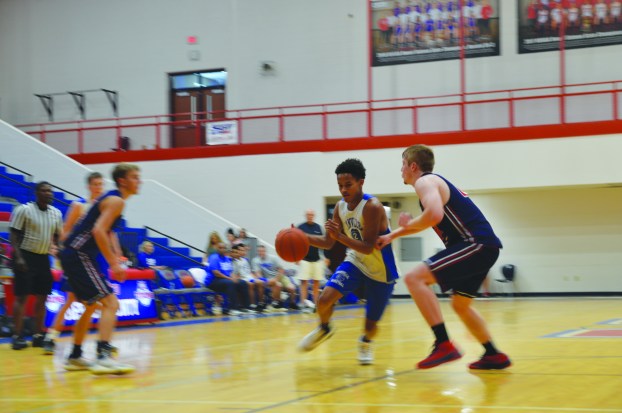 Trey Dawson (2), drives to the basket in a summer game against Russell County. (Photo by Derek Brightwell)

With the two week period known as the Dead Period, where high schools are not allowed to run official practices or team events, teams across the state are getting the last of their workouts done. For Danville High School boy’s basketball, that program concluded Thursday night with its final two summer basketball games against Mercer County and Russell County.

For coach Ed McKinney, playing these exhibition games is preferable to the typical practices that he says some teams go with.

“We play a lot of games here. It helps us a lot here at Danville, because football is so big, we’ve got a lot of kids in football,” he said. “It’s more a part of preseason practice because we lose a lot of them during football. We play probably between 15 and 20 games. We’re playing two a night. It’s been really good for us.

“The kids get a lot of work in, kids who haven’t gotten a lot of varsity time are getting to play a lot. It’s good experience for them and we’re playing really good teams,” he added. “Last night we played Scott County, which was in the finals of state. We lost by three at the buzzer. It’s been good, we’re getting a lot out of it.”

In addition to the benefits of seeing game action, McKinney also admits that it’s just easier to get kids excited to play in games, compared to practicing in the summer.

“In today’s game, there’s only so much that you’re going to be able to ask of multi-sport athletes. “They’re not going to want to come in in June when you’re six months from the season and do loose ball drills and draw charges,” he said. “So it’s a way to work and get better, but you’re still playing games so the kids enjoy that better.”

He also acknowledged the difficulty in retention that can be had when you practice so far away from the beginning of the season. 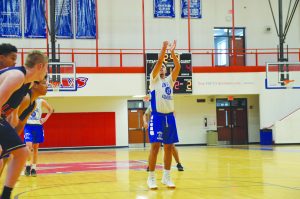 McKinney said that he prefers to schedule road games for the summer schedule, because it gives his players the experience of playing in a more hostile environment that a road gym can provide, but also because of the experience of traveling together as a team.

In the course of the summer schedule, McKinney says that Danville has been able to get experience against teams that it will be playing during the year, including several 12th region opponents in a series of games at Somerset on Tuesday.

Perhaps the biggest challenge that McKinney says he faces in the summer is the other commitments that kids have during the offseason.

“There’ll be games where a kid has to work. You don’t have your team with you all the time. That’s another reason that it’s hard to practice, because they’ve got other sports, they’ve got other commitments, they’re working,” he said. “None of this is mandatory. We just try to encourage them to play as much as they can.”

Lynn steps down as Garrard coach

For the first time in seven years, the Garrard County baseball team will have a new coach in its dugout... read more