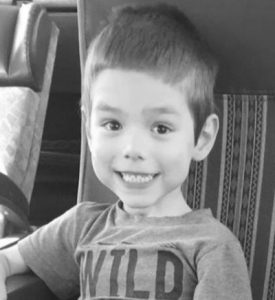 Gage Carter Griffin, 5, of Waynesburg, Kentucky passed away on Monday, June 17, 2019. He was born December 1, 2013 in Lexington, Kentucky to Eddie Griffin Jr. of Wayne County, KY and Amanda Shepherd Martin of Waynesburg, KY. He was a real superhero and called himself “the real batman”. He loved Batman, riding four wheelers, playing with his sisters, and loved camouflage and boots. He was also a student at Waynesburg Elementary School.

In addition to his parents, he is survived by one brother, William Earl Martin IV of Brodhead, KY; three sisters, Emily Grace Martin, Annabell Marie Griffin, and Patience Louise Griffin all of Waynesburg, KY; his dog named “Diesel”; and many other family and friends.

He was preceded in death by a brother, Hunter Chase Griffin.

Visitation will be Thursday, June 20, 2019 at Spurlin Funeral Home Chapel, Stanford from 5-8 p.m. Funeral service will be 1 p.m. Friday, June 21, 2019 at the funeral home with Jason Coulter officiating. Burial will follow at Berry Hollow Cemetery in Stanford.

Admission to all Danville Admirals games is going up to $6 next school year. The Danville Board of Education approved... read more