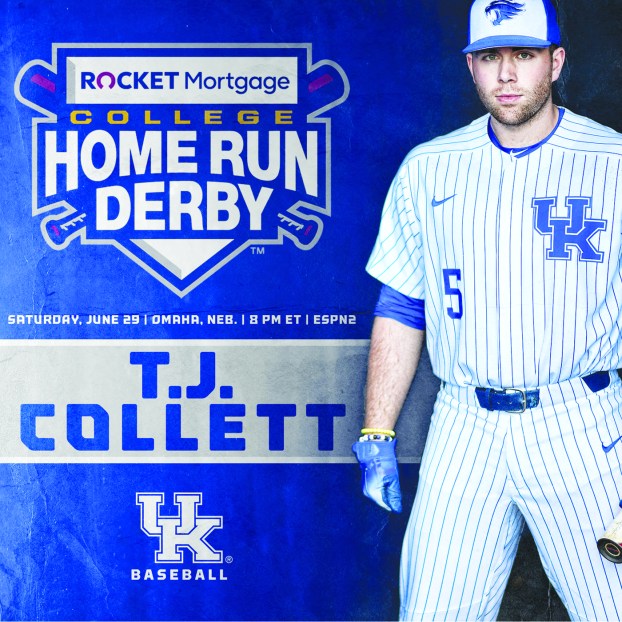 LEXINGTON, Ky. – Kentucky’s T.J. Collett has been selected to the roster for the 10th annual Rocket Mortgage by Quicken Loans College Home Run Derby at TD Ameritrade Park Omaha on Saturday, June 29, Intersport announced today. Collett is one of six college baseball players selected for the event that will air live on ESPN2 at 8 p.m. ET. He was invited to take part in the Rocket Mortgage College Home Run Derby after being recognized as one of the top power hitters in college baseball.

Collett, from Terre Haute, Ind., has mashed 21 home runs in his career, including 10 in each of the past two seasons. He has appeared in 101 career games with 74 starts, averaging a round-tripper every 15 at bats. Although he missed most of his freshman season while recovering from a knee injury, Collett has proven to be one of the nation’s most accomplished home run sluggers over the past two seasons. He launched a blast into the upper deck of Minute Maid Park, home of the 2017 World Series champion Houston Astros, during the 2018 Shriners Hospitals for Children College Classic.

Collett has tabbed his father, John, as his pitcher for the event.

“I’m honored to be selected to participate in this event,” Collett said. “This is a dream come true for me. Ever since I first started playing the game I’ve wanted to compete in a home run derby and to do so while representing the University of Kentucky is a blessing. To share this with my dad, I couldn’t ask for anything more.” 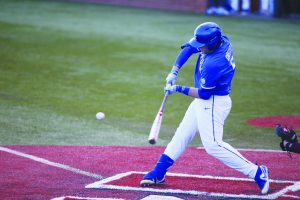 TJ Collett has hit 21 home runs during his career as a Wildcat. (UK Athletics)

A complete list of participants will be released at a later date.

Contestants in each round will have a timed period of four minutes to hit as many home runs as they can. Once the timed period concludes, contestants will have one final opportunity to hit a home run with the “Bonus Ball.” If successful, two additional home runs will be added to the contestant’s total score.

A record 190 home runs were hit during the 2018 Derby, breaking the previous mark of 185 hit in 2016. Air Force’s Nic Ready outlasted Clemson’s Logan Davidson, 21-20, in the final round to take home the title. It was the third-straight year the contest was decided on the final pitch.

Tickets for the event can be purchased by logging on to www.collegehomerunderby.com or ticketmaster.com, or by visiting the CHI Health Center Omaha box office. Tickets begin at just $10, and special rates are available for groups of 20 or more. Exclusive on-field experiences are also available for groups. Group sales information can be found by visiting the ticket page at www.collegehomerunderby.com/tickets.

More information, including participating players, will be released in the coming weeks. Follow the Rocket Mortgage College Home Run Derby on Facebook and Twitter for the latest event updates and information.

Since 1985, Intersport has been an award-winning innovator and leader in the creation of sports, lifestyle, culinary and entertainment-based marketing platforms. With expertise in Sponsorship Consulting, Experiential Marketing, Hospitality, Retail Engagement, Content Marketing, Productions and Property Creation, this Chicago-based Marketing & Media Solutions Company helps its clients engage consumers with compelling ideas, content and experiences.

UK secures running back future with thunder and lightning