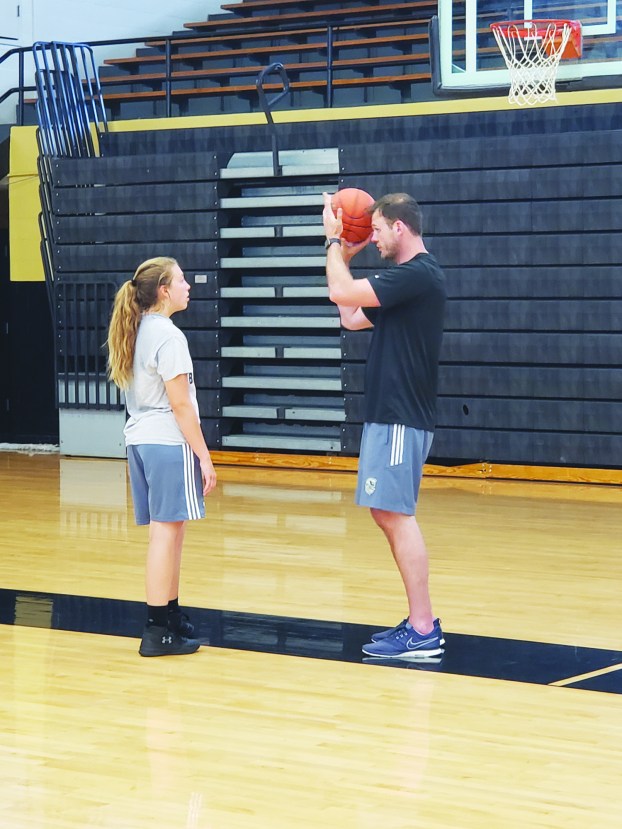 New coach Ryan Wiersma has been working with his team throughout the spring. He says he's excited about the athletes at Boyle County, and the younger players coming up. (Photo by Derek Brightwell)

All in the family: Boyle girl’s coach prepared for new challenge

Ryan Wiersma has had several new titles in the past couple of years. Two years ago, he became a father for the first time. Last year, he stated his teaching career at Boyle County High School. This year, he will add a new, although familiar, title: coach. As the school year ended, he accepted the job as the Rebels’ head girl’s basketball coach, which will be a new experience in itself.

Before coming onto the staff at BCHS, Wiersma coached the Centre College men’s team as an assistant and before that, he was the director of basketball operations for his alma mater, Eastern Kentucky University, where he found success and a trip to the NCAA Tournament. Now, he accepts the new challenge of balancing being a father, a high school teacher, and a high school basketball coach.

“When I was at the collegiate level, all I focused on was basketball. I didn’t have to worry about meeting with teachers or grading papers,” Wiersma said. “I worried about watching film and those things. There’s going to be finding a new balance with all of it between grading papers, planning a lesson, and then planning practice and watching film, and still being with my family at the end of the day.”

The Newark, Ohio native has been around basketball his entire life, but said that he didn’t think about taking the job immediately.

“My wife really pushed for me to do it first,” he said. “She was like ‘You love basketball. It’s a passion of yours. You need to go back out and do it for yourself because you’ll really enjoy it.’ And I’ve loved every minute of it. The girls have been great and they’ve worked so hard.”

That encouragement was all that he needed. Family has always been the priority for Wiersma, who left the job at Centre to be able to spend more time with his daughter and wife. 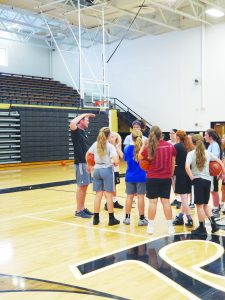 Ryan Wiersma is taking over as the Boyle County girl’s basketball coach this year. Previously, he has coached at Centre College, and served as director of basketball operations at Eastern Kentucky University (Photo by Derek Brightwell)

“I spent a year away, and I just didn’t like being away from her all the time,” the new father said. “You know, when you’re on four or five day road trips five, six, seven weeks out of the year. It’s just not who I wanted to be as a parent. I wanted to be there as much as possible.”

He also cited the encouragement of senior Alyssa Wray, who is one of his students, for pushing him toward taking the job, and for her leadership in his first summer with the team.

“She’s wanted me to get the job. She’s been very excited, and has been a great leader this summer. She’s really worked hard, making sure girls were here, because half of our team was still playing softball,” he said. “She’s really pushed it, pushed herself harder than what she’s done in the past. It’s been great. It’s been a really fun experience.”

One thing that Wiersma knows, and is excited about, is the history of winning at Boyle County, and the athletes that are at the school.

“One of the best things about this job is just the success Boyle County has had at everything they do,” he said. “You look at soccer and softball just going to the state tournament, our track and field program has won. There are really great athletes in this school, they weren’t all playing basketball and I know they all won’t just play basketball, but it’s about getting some back to the program.

Ryan Wiersma won’t ask his players to do any workout that he’s not willing to do, even if it does leave him sore for the next few days. (Photo by Derek Brightwell)

“Our youth program has really picked up recently thanks to some individuals in the community. It’s made this job very exciting because today a lot of the kids that you saw work out were in seventh and eighth grade,” he added. “So they’re in here doing two-a-day workouts and really pushing themselves and they want to be a great basketball team and want to compete to win regional championships.”

Wiersma acknowledged the importance of being a multi-sport athlete, and his desire to see some more girls coming out for basketball, but said that he doesn’t want anyone who doesn’t want to be there.

“I’m not pressuring anyone to come back. You’ve got to want to be here. It’s going to be a hard working program,” he said. “You look at the programs that are successful, they’re dedicated. I don’t want someone who’s going to be ho-hum.

“Kelsey who’s here today, Emily Glasscock, they both came back after not playing. They’re both very hard working, a little rusty, but we’ll get them back there by October 15.”

In that same vein, he said that, while he believes it’s important for kids to play multiple sports, being committed to those teams is the most important thing.

“I am a big fan of girls playing multiple sports. It’s better for their bodies. All the research shows you’ll have less injuries, less repetitive use injuries, There will also be some less mental fatigue as well,” he said. “(But) if you’re not passionate about something and aren’t willing to commit to it, I won’t tell them to go play soccer because you’re not going to be into it and you’re not going to be as competitive. It’s not going to feed them the same way as basketball does.”

Ultimately, though, while Wiersma says that he doesn’t know how his team will be different this upcoming season from what it has been in the past, he does know that fans can expect a hardworking team.

Ultimately, the mentality that Wiersma is taking with this program can be summed up by the first thing he said to me: “The only time this program is about me is if we lose.”

After Boyle County head coach Steve Adams announced he was stepping down from his role as head coach after the... read more