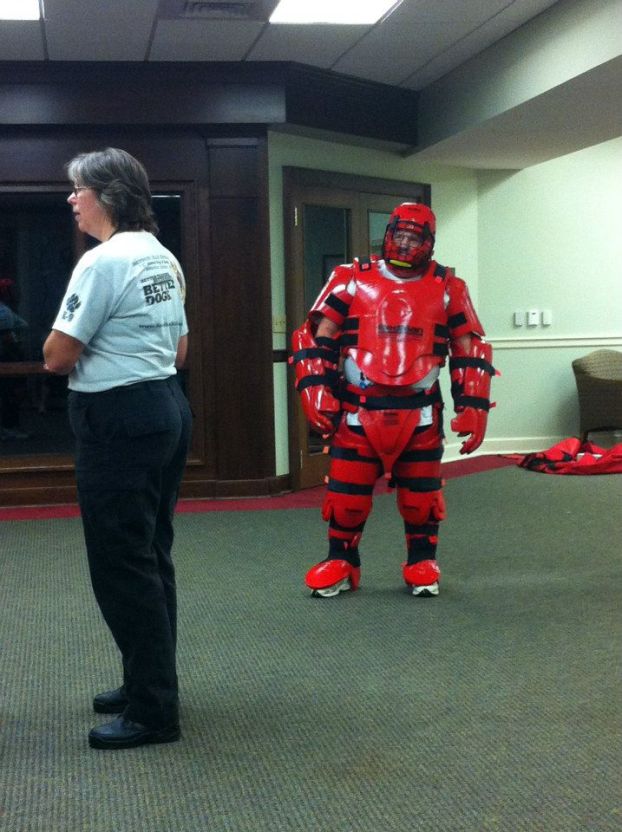 Life skills for adults — it’s part of what Alethea Price teaches for a living. As an agent for family and consumer sciences with Boyle County Extension, she holds a monthly class at the library as part of the Adult How-To series.

This month, Price decided self-defense should be the focus of the free offering and enlisted the help of Det. Lisa Dollins, who’s made the training a priority in her career. 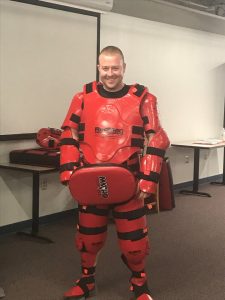 Ofc. Adam Wilson assists with R.A.D. by suiting up as “Red Man,” wearing complete padding from head to toe as part of an attack simulation. (Photo contributed)

Dollins says she will offer an hour-long overview of R.A.D training, which stands for rape aggression defense. The nationally recognized program has been around since 1989, and focuses on teaching women not only how to defend themselves, but how to avoid dangerous situations overall.

However, Monday’s class is for everyone, Price says. “Anyone can attend.”

Dollins says, “We will go over wrist-reductions, things you can do to help prevent attacks, how to handle it when weapons are involved, recognizing vulnerable locations …”

She will even take participants through how to correctly handle reporting an attack.

Because this is an introductory class, it won’t cover everything — but a 12-hour class Dollins offers, also free of charge, does. She holds R.A.D. training for businesses and organizations, churches or any other sort of group who wants to come together as females and learn how to handle themselves if they should ever be confronted.

“People generally hear 12 hours and think that’s really long, but when you’re in class, it goes by quickly,” Dollins says. And it’s important that groups have time to practice executing the moves.

She usually splits the classes up into three sessions that are four hours long, but says she’s flexible about what groups need to schedule. Generally, the classes are anywhere from four to 10 people, which Dollins says tends to be the best ratio in order to give groups practice.

“I’m very fortunate that my chief (Tony Gray) and assistant chief (Glenn Doan) support the program 100% and let me do it whenever I need to,” she says.

In the more in-depth class, Dollins shows all age groups basic moves that anybody can do, and they don’t require a lot of exertion.

At the end of 12-hour sessions, an officer dresses up as “The RedMan,” wearing complete padding from head to toe, and an attack simulation is held with each student.

“Two of the scenarios, the officer will come up behind them, one we have the student’s eyes covered, so they can experience being grabbed from behind and surprised, and knowing how to get out of those holds,” Dollins says.

She “covers some fears” for women, as well. “For me, I’m afraid of getting physically picked up, off of the ground. So some of the scenarios focus on that, and showing women how these moves still work, even while in the air.”

R.A.D. has been around for so long due to its success rates for women. The system is known for teaching females how to use the strongest parts of their bodies.

“We’re built differently — our legs are much stronger, but we have different weak points. It’s all about knowing what those strengths and weaknesses are,” Dollins says. 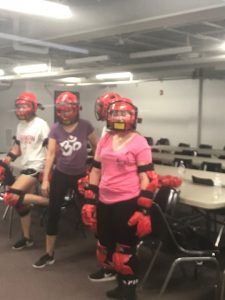 All age groups are taught basic moves that anyone can do by Dollins during the course. (Photo contributed)

Dollins became a R.A.D instructor not too long after coming on the Danville Police Department nine years ago. After graduating from the University of Louisville, she immediately applied to the PD, and came on the force when she was 21.

She’s held classes at the library, Centre College and for organizations, but says it’s best when an entire business gets on board, and makes it important for their staff to complete the training.

“But I enjoy doing the training for small groups of friends, too,” she says. The Police Department has a training facility that can be used, but she can instruct class from anywhere, as long as there is appropriate space for the moves.

Sometimes, she’s noticed the biggest epiphanies happening in the youngest and the oldest students. “Sometimes the youngest ones and the most elderly ones don’t feel as strong physically or as empowered. They realize, though, when they go through these scenarios that they have more strength than they realized, and that yes — they can defend themselves.”

She says the biggest come-away women have from the class is realizing their strengths. Even though it’s the 21st century, Dollins says women are still raised to be more mild-mannered, more polite and more respectful.

“And sometimes, not to speak out of turn, and not ruffle any feathers. All that goes out of the window when you’re learning what I teach,” Dollins says.

She says R.A.D. is about survival — she’s not going to teach women how to beat up the “biggest and baddest” person they know. However, she says, after taking her class, “You’ll survive the fight.”

Anyone interested in finding out more about the R.A.D class can email Det. Dollins at ldollins@danvilleky.gov.

Stanford Road is now open following the repair of a ruptured gas line. At about 9:30 a.m. today (Friday) a... read more