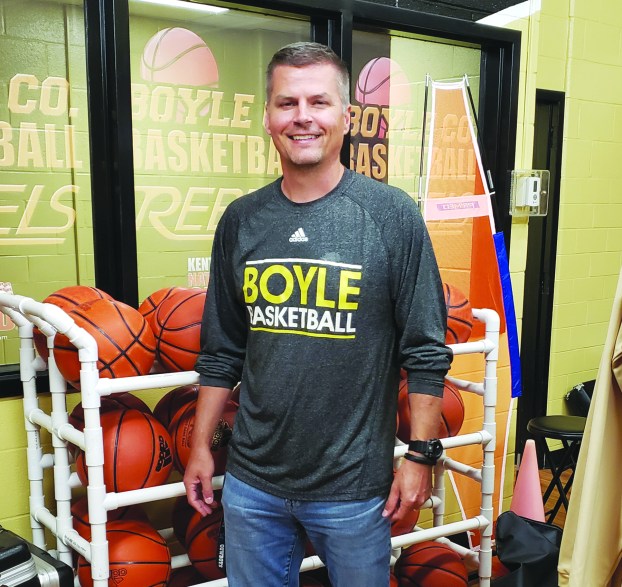 Dennie Webb has been an assistant coach at Boyle County for over 15 years. This year, he will be the head varsity coach, replacing his friend Steve Adams. (Photo by Derek Brightwell)

After Boyle County head coach Steve Adams announced he was stepping down from his role as head coach after the 2018-19 season, it took until earlier this week to find his replacement, but it was someone who had been there all along. Moving over a spot on the bench, former assistant Dennie Webb will be replacing his longtime friend beginning in the 2019-20 season.

Webb said that, while he is happy to take the job, he felt sad that it came with the resignation of Adams, his longtime coaching partner and friend.

“We had known he (Adams) was considering it (leaving), to a certain degree. Now he did catch us off guard because we thought maybe we had gotten past that,” Webb said with a chuckle. “It was sad to hear that he was resigning. We enjoyed our time together. I loved coaching with him. When he resigned it was kind of a somber moment, really. I would have been content with just doing what we were doing, with me as an assistant.

“He’s a great guy, a good friend. I was a little bit disappointed when he resigned, but then, you know, it’s become an opportunity for me.”

Webb said that he wasn’t sure what he was going to do with the future of the program in the air. But when he and some of the other assistants began running offseason practices, it clicked that he wanted to take the reigns of the program.

“Once Steve resigned, I had those feelings of disappointment, just because, like I said, I really enjoyed coaching with him,” Webb said. “So I had a somber moment there. We, as assistants, started going ahead and doing things with the returning players just to prepare them for the season, and probably the first couple of practices that we had with them is when it hit me that this was something that I wanted to try out.

“Prior to that, I wasn’t sure I thought ‘Well Steve’s gone, things are probably going to change’, but once we started practicing and getting them in the gym, I had the feeling that this was something that I wanted to do.”

Webb thinks that the familiarity he has with the team, having been involved in Boyle’s basketball program for a decade and a half, will make the transition easier. Ultimately, he feels like his relationships he’s built up with not only the players but also the teachers and administration made him both the obvious choice and the right fit. And he thinks he already has the approval of his players. 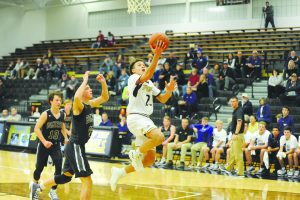 Luke Imfeld in a game against Somerset last year. Even with a new head coach, the transition should be smooth for the sophomore. (File photo Matt Overing)

“I hope so. I’ve gotten some good feedback from most of them. So, I hope that’s the case. I feel like it is,” he said with a laugh. I’ve gotten a lot of comments and congratulations from several of the players. So I think that’s something they’re OK with.”

Webb said that getting the call and being offered the job was mostly a relief for him. He said it had been about a week since he interviewed and the “anguish of not knowing” was getting to him.

“It was a relief to get some closure on the whole thing, whether I was the selection or not. It was exciting, obviously, to get the phone call,” he said. “I was hoping that it would be the call that I got, you know, that I was the guy.”

With the program being under an assistant to the previous head coach, fans can expect a similar feel to the game, but will notice some slight differences.

“Steve and I are a lot of like as far as the X’s and O’s goes defensively. I think, maybe we differ, probably the big thing is that we implement different offensive ideas,” Webb said. “It won’t be major changes. I do have things that I want to do, and want to try.”

Webb said that he will be keeping “at least one, hopefully two” of the previous assistants, and is still working on filling out his staff. In that same vein, he said he did contemplate the possibility of him staying on as an assistant if the coaching search had gone a different way.

“The next coach might not have wanted me to stay. So I really don’t know, I had different feelings about it at different times. Sometimes I felt like taking a break and sometimes I wanted to stay. I tell people, first of all, it wouldn’t have been my decision,” he said. “The new guy might have wanted to clean house and bring his guys in.

“Luckily I don’t have to worry about that now,” he added with a smile.

As a recording of the Star Spangled Banner played over an intercom system, a tractor drove around spraying water on... read more