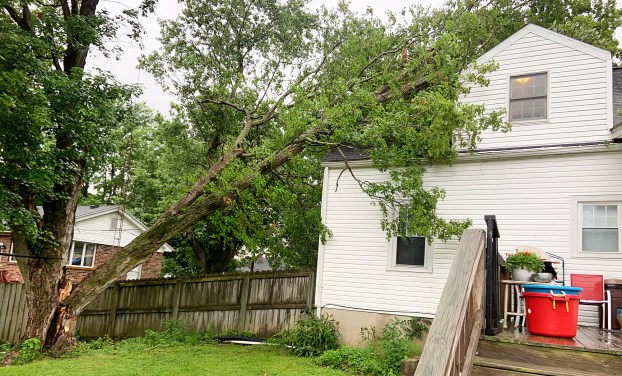 A large tree split during Sunday evening's storm in Perryville, causing it to crash onto the rear of the home of West Fifth Street. (Photo submitted by Mike Wilder) 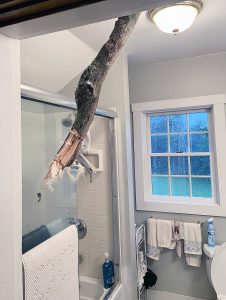 A large tree branch pierced through the roof and ceiling of a home on West Fifth Street in Perryville. (Photo submitted by Mike Wilder)

According to Boyle County Emergency Management Director Mike Wilder, “It was a typical summertime storm.” But because the ground was already saturated, old and weak trees easily were taken down by the wind, he said.

Several trees in Junction City were knocked down and Worldstown Road was closed because of a fallen tree, Wilder said.

Lightning struck a transformer near Perryville Elementary School which caused electricity in the area to go out for a while, and Dollar General Store had to close, Wilder said.

“Perryville got a good lick.”

At around 6:30 p.m. a tree trunk split near the ground ,causing a large section of it to crash on the rear of a home on West Fifth Street in Perryville, Wilder said. Two large limbs pierced through the roof and ceiling, nearly reaching the floor inside the upstairs bathroom and hallway.

Wilder said, “It was pretty scary things for those folks.”

The Little Lighthouse Learning & Care Center applied for an amended conditional use permit to expand its facility from its... read more