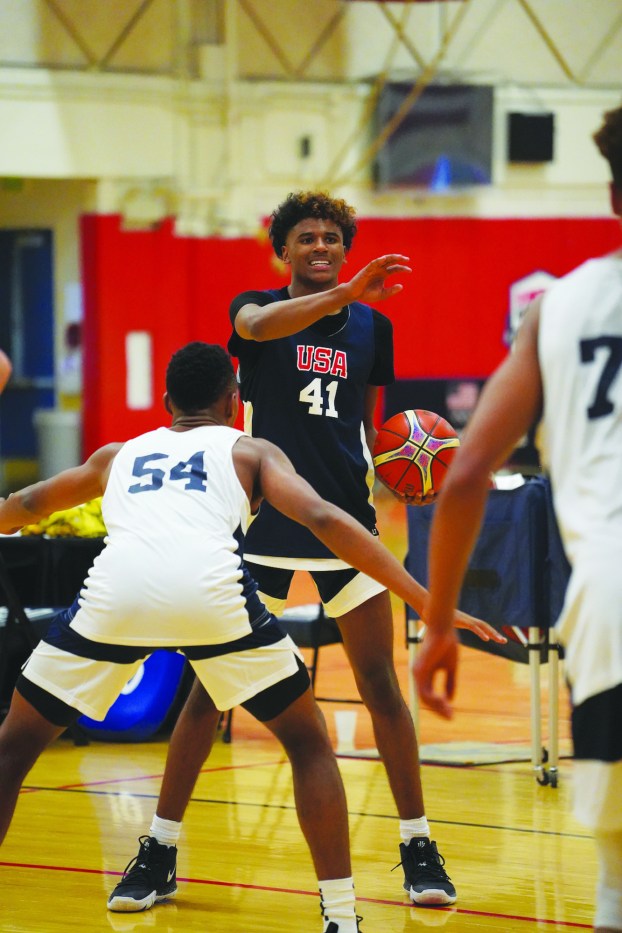 Kentucky recruiting target Jalen Green, one of the top three players in the 2020 class, will play in Kentucky several times next season now that he's transferred to Prolific Prep. (USA Basketball Photo)

He’s a consensus top three player in the 2020 recruiting class but the only person apparently not impressed with Jalen Green’s talent is Jalen Green.

The 6-foot-5 shooting guard has offers from most of the nation’s elite programs, including Kentucky. He was the most valuable player on the USA Basketball 17-and-under 2017 World Cup winning team.

“All the attention and hype has been a little bit of a culture shock for him,” said Marcus Green, the player’s trainer. “In his eyes, he’s just a normal kid. He has not let all the hype change him. He stays very even keeled.

“The funny part is that me and his mom try to get him to be a little more understanding of who he is. A lot of times he just feels like he is a normal kid and does not understand why he can’t go everywhere and do things because of who he is. He wonders why people want pictures with him or want autographs. We have to tell him that’s who he is.”

He averaged 30.1 points, 7.8 rebounds and 3.6 assists per game last season as a high school junior for San Joaquin Memorial (Calif.). He has transferred to Prolific Prep for his senior year and his new team will play several times in Kentucky next season starting with the Marshall County Hoop Fest Dec. 5-8 where Green certainly will be asked for pictures and autographs, especially if he remains as high on UK coach John Calipari’s wish list as he is now. His team will also play in McCracken County Mustang Madness in January.

“Prolific Prep has a good program and puts on a good show to draw a good crowd,” Marcus Green said. “I think he will bring in a couple of people to see what he does but fans will come to see that whole team play.”

Green got one of Kentucky’s earliest scholarship offers in the 2020 class but some other players did get UK scholarship offers before him. That puzzled the player a bit but the family had a “conversation” with UK coaches to make sure he was the priority there he had been led to believe.

“He grew up following Kentucky,” Marcus Green said. “Kentucky is one of his dream schools. One thing I told coach Cal was that it was rough on him because he offered some other players before him and Jalen was ranked No. 1 (in the 2020 class). Calipari broke it down for him and kept it 100 percent truthful. That’s why he has put Kentucky in the spot it is now and that remains his dream school.”

Jalen Green has visited Florida State and Memphis. He’s indicated Oregon has been very active in recruiting him, too.

“We are hoping for someone who is honest and trustful with us about everything,” Marcus Green said when asked about what might be the deciding factor in Jalen’s college choice. “We want someone who will hold Jalen accountable but if something goes wrong will also hold himself accountable.”

Jalen Green definitely will make an official visit to Kentucky. Plans were on hold until he finished playing for USA Basketball.

“That is his dream school and one of his priorities is to make sure he explores that in depth,” Marcus Green said. “Then if it doesn’t work out, it doesn’t work out. But he really wants to explore that option. I already know the Kentucky fan base will be encouraging him. That is a good place for him because their support is unbelievable. We’ve seen that.”

Green was picked as one of the 18 finalists for the USA Basketball Under 19 World Cup team that will play in the World Cup June 29-July 7 in Heraklion, Greece.

His trainer, Marcus Green, says there is no one thing the player does best.

“He just does a lot of everything, which is one thing the coaches all really like,” Marcus Green said. “He does so many things well. He didn’t just develop one part of his game. He knows he has to be an all-around player whether it is playing defense, shooting, getting to the rim.

“I really think he has the ultimate game. He has improved his jump shot and is working to make it even better. He would stay in the gym forever but me and his mom would have to finally just say enough is enough and get him out of there.”

The 45th District will be represented by another standout pitcher in the Kentucky-Tennessee All-Star Series on Wednesday in Lebanon, Tenn.... read more