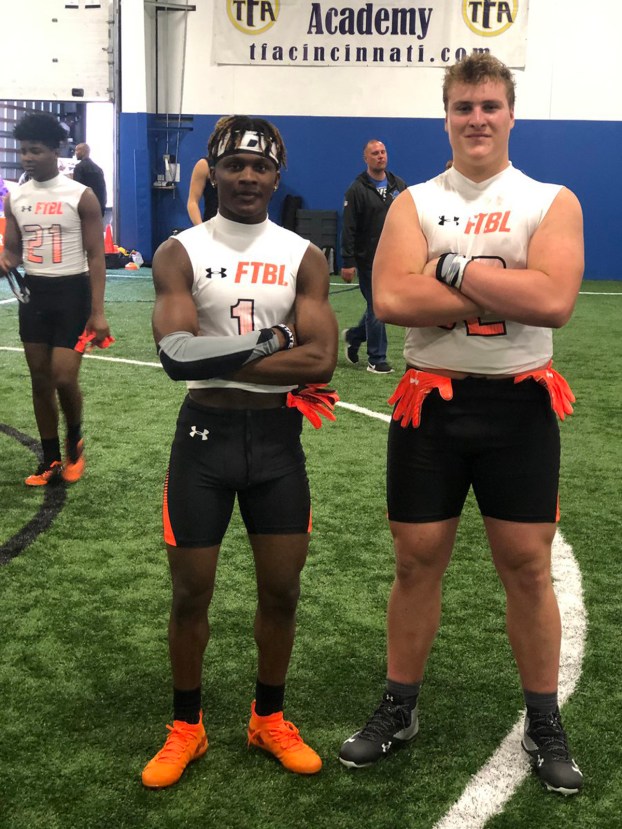 Jager Burton, right, and Frederick Douglas teammate Dekel Crowdus both have a lot of Division I offers, including Kentucky where the pitch is to stay home and help the Cats succeed. (Photo Larry Vaught)

Growing up in Lexington, it’s no surprise that Jager Burton says he’s always been a Kentucky football fan. What is a bit more perplexing is that he also grew up an Oregon fan.

“I saw their uniforms and liked watching them when I was little,” said Burton about his fascination with the Oregon.

Now he is a 6-foot-4, 280-pound junior offensive lineman at Frederick Douglas High School attracting attention from a lot more colleges than just Kentucky and Oregon. Others include Clemson, Ohio State, Purdue, Penn State and West Virginia. He’s made a camp visit to Alabama on Saturday and also got a scholarship offer from Nick Saban.

He knows there’s going to be some added pressure on him because of the Division I scholarship offers, but he doesn’t plan to change what has worked for him.

“I got the offers because of all the work I put in. I expected I would get some offers, just not quite this early,” Burton said. “But I have to work just as hard now, even though I’ve got the offers, to be an even better player.”

His senior teammate, offensive lineman Walker Parks, has been a verbal commit to Clemson for some time even though UK and others continue to recruit him. Burton says Kentucky coaches have told him what a “priority” it is to keep top in-state players at home.

“They talked about some of the players they have missed out on in state like Jed (Wills), Damien (Harris) and even Wandale (Robinson) last year and how much it could have helped if they had stayed home,” Burton said. “They are really giving me the ‘stay at home and make your state proud’ scenario. I would really like to be close to home but that also will not be a deciding factor in where I go. I don’t care to be away from home.”

He admits Parks, his friend since he was 5 years old, talks to him some about Clemson, a school Burton readily admits he likes a lot.

“But there is no pressure from him to go there because of him,” Burton said. “I would not go just because he is there. It would be a plus having him there but I would not pick a school solely off where he is going.

“Walker has helped me a lot. Some mistakes he made in recruiting by focusing on things that did not matter as much. He told me before I did the same thing. I focused more on things coaches are looking at and it helped me know what things would be like.”

He also credits Frederick Douglas head coach Brian Landis, offensive line coach Nathan McPeek and his parents for helping him with his recruitment.

“I have a bit of a support system here,” Burton said.

“He’s a great coach. All the college camps I go to, they teach us the same thing or pretty much the same things that he does,” Burton said.  “It’s not like we have to learn different things when we go to camp because he’s such a great teacher on a daily basis for us.”

The entire Frederick Douglas staff apparently is teaching all the right things. Not only do Parks and Burton have high level scholarship offers, but junior receiver Dekel Crowdus has offers from Ohio State, Kentucky, Penn State, Tennessee, West Virginia and others. Incoming freshman T.J. Burton already has a UK offer. Sophomore receiver Dane Key has offers from Marshall and Western Kentucky. Sophomore safety Ty Bryant likely will get numerous offers this summer.

“Wherever I go I just want to make the people of Kentucky proud,” Burton said. “I hope we are changing the culture of people sleeping on Kentucky football.”

Burton’s plan now is to commit before his senior season so he can enjoy that last high school season with his teammates.

“I want to prioritize high school school over my future my last year,” Burton said. “Last year I didn’t really experience what it might be like to be targeted by teams because my first offer didn’t come until after we lost in the playoffs. I want to see what it is like this year but also enjoy recruiting and eventually make the best decision I can that is right for me.”

By LARRY VAUGHT He’s a consensus top three player in the 2020 recruiting class but the only person apparently not... read more