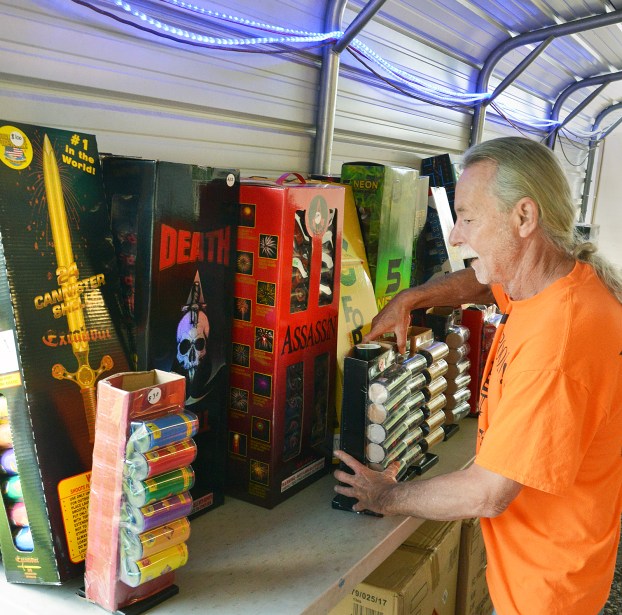 Fireworks 101: Here’s how to stay safe and have fun in Boyle County

As people start preparing to celebrate Independence Day on July 4th, there’s an abundance of opportunities to purchase fireworks in Danville and surrounding areas.

Tents are scattered throughout town chock full of sparklers, flaming rockets and mortars with names like “Loyal to None,” “Whistling Jake,” “Zombie” and “Death Shell.”

Store shelves are stacked with brightly colored boxes containing all sorts of fireworks that boom, sparkle and pop and are packaged to attract customers of all ages. All of it is legal for personal use in Kentucky.

An out-of-state fireworks vendor selling in Danville said fireworks are beautiful and a lot of fun but people should always be cautious. “They’re all dangerous because they’re all explosive. …  Literally, they all go up in smoke,” she said.

Ordinances restrict when you can shoot fireworks off within the city limits of Danville, Junction City and Perryville.

You can shoot consumer fireworks in Danville and Perryville between the hours of 10 a.m. and 11 p.m. 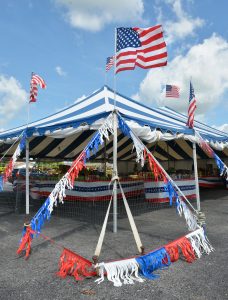 The Parker Family Fireworks tent, out of Tennessee, is set up in the Danville Manor Shopping Center. Austin Hill, whose mother runs the business, said safety is always important when firing fireworks. (Photo by Robin Hart)

Junction City limits the use of fireworks to between 10 a.m. to 10 p.m. all year long. The time restriction is expanded to midnight on July 3 and 4; and Dec. 31.

All three cities penalize violations of their fireworks ordinances with $250 for the first violation, $500 for the second and $1,000 for the third within 12 months.

When enjoying fireworks, there are several safety precautions to remember.

Fireworks should not be lit under trees or roof lines — only in open spaces. Danville Assistant Police Chief Glenn Doan said people should be “mindful” of where they light fireworks. “Just because they go up in the air, they have to land somewhere.”

Doan also said extinguished fireworks leave behind a lot of debris and trash, so people should pick up litter after they have their fun.

Ray Boone, owner and operator of Fourth Street Fireworks (and Little Sign Shoppe) said educating his customers on fireworks safety is important to him, especially since he’s a local fireworks business and feels a responsibility to the community.

Boone asks new customers what they think the most dangerous explosive is in his booth. They usually answer mortars and firecrackers, he said. However, the “common little sparklers” are the most dangerous, Boone explained.

When young children are given sparklers, they usually start circling the small wire rod side to side and up above their heads, Boone said. The next thing you know, sparks fall down on the child and burn their face; or they accidentally smack another child in the face or arm with the burning end because they’re too close, he said. “It happens all the time.”

A safety measure he just heard about was to stick the sparkler through a plastic cup and have the child put their hand inside the cup to hold the sparkler.

Have water on hand

Before firing your show, you should check the area for ignitable features, such as gasoline cans and brush piles, Boone said. Have plenty of water sources available too, including a running water hose and buckets already filled with water placed around the area. It’s a good idea to soak the ground in the shooting space with water before the show, especially if the grass is dry, he said.

Boone learned that lesson in his own yard, when an artillery shell was lit and the combustion knocked over nearby fireworks and lit them too. Instead of going up in the air, they fired into a brush pile and the dry grass surrounding the area began to burn. He was glad he had a water hose and buckets on hand.

If you accidentally shoot a lit firework into unlit fireworks, “Then it’s run for your life,” he added.

When loading a mortar shell in a firing tube, tap it to make sure the explosive hits the bottom before lighting it, Boone said. Don’t hold Roman candles in your hand, he added. Some of them have a kick as strong as a shotgun. If you hold it and drop the candle on the first shot, “you have nine more shots” being fired in every direction, Boone said.

He also suggested that fireworks be placed in or on cinder blocks for stability; fireworks should be spaced apart from each other when they’re being lit; and adhere to the packaging safety suggestions. “Light and get away!”

Consumer fireworks are allowed to be sold in Kentucky, but Boone said to be aware that illegal fireworks can still be floating around at some booths.

The Fourth of July is a special time when Americans can celebrate their independence, Boone said, and firing fireworks is one of the most fun and traditional ways to enjoy the holiday.

However, it’s important to remember that whoever lights the fireworks show should be sober, he said.

“Fireworks and alcohol can be a bad mix … You can have a lot of fun if you use some common sense.”

A man originally charged in Danville with inducing a juvenile to send him sexually explicit images was recently sentenced in... read more