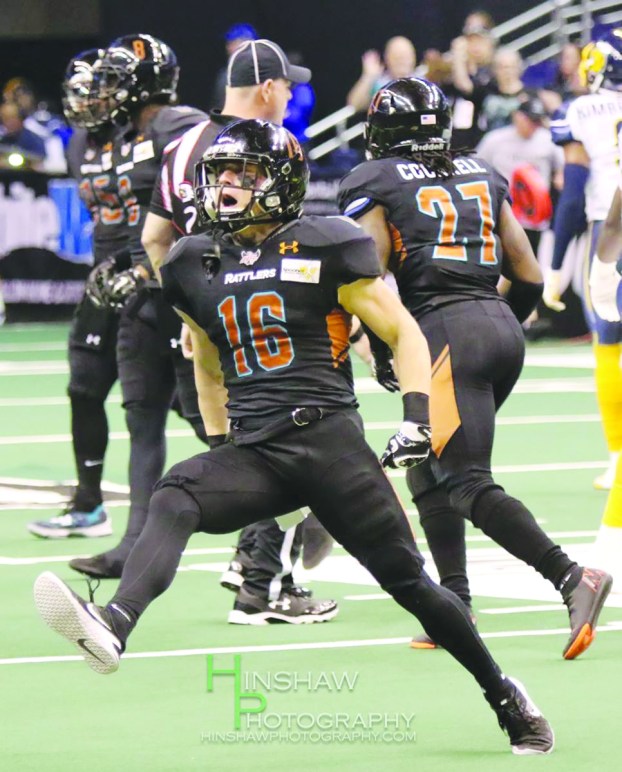 Former Rebel star Jarrod Harrington was overlooked out of high school and college, but thrives at every level he plays (Photo submitted)

Jarrod Harrington was a standout two-way star football player at Boyle County High School as both a wide receiver and a defensive back. He was a part of two consecutive undefeated state championship seasons and almost made it three in a row his senior year. Today, he is the star receiver for the Arizona Rattlers in the Indoor Football League and is one win away from reaching the United Bowl, the league’s championship.

His career at Boyle County was decorated, receiving first team all-state honors as a defensive back. He was invited to play in the Kentucky-Tennessee all-star game, where he made the first team All Border Bowl, and was named defensive player of the game. But a broken arm in the middle of the season limited his post-prep options.

“My performance allowed me to get a lot of Division-I looks until I broke my arm. Teams didn’t think I’d be able to come back,” he said. “I went through surgery and rehab and was playing again in six weeks. But by then, the D-I looks stopped coming. The one school that stayed with me throughout the whole injury process was Campbellsville University. So that’s how I ended up there.”

He remains very proud of the program he was an integral part of during high school.

“I just loved the pageantry of Boyle County. I loved the atmosphere and the tradition,” the former Rebel said. “When I go back nowadays, I see a lot of the same stuff from when I was there. So it really speaks to the tradition there.”

Now, as a member of the Arizona Rattlers, he is part of another powerhouse program. The Rattlers were formerly a member of the Arena Football League, the most prominent name in indoor football. However, following the 2016 season, the Rattlers left the AFL to join the IFL. In 2017, its first season in the new league, Arizona won the United Bowl. 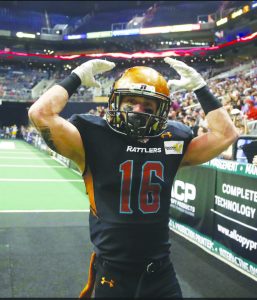 In his second season in the IFL, Harrington has 18 touchdowns and is a team leader in receptions and receiving yards. (Photo submitted)

Harrington said that while the IFL wasn’t initially on his radar as a landing spot out of college, he was happy to land in Arizona.

“I didn’t know about the IFL, I knew about the Rattlers, obviously. They were a powerhouse in the AFL in the 90’s. I used to watch them on TV as a kid,” he said.

He was also a four year starter and earned all-conference honors as a freshman. And in his junior and senior seasons, he helped lead the Tigers to back-to-back conference championships.

His play garnered attention from scouts, both from the Canadian Football League (CFL) and the National Football League (NFL), but felt that he was overlooked because of the size of his school.

“I was invited to the NFL regional combine, and performed really well there. But that NAIA tag hurt me, I think. I didn’t have the D-I label, and I felt I got overlooked for some of those D-I guys,” Harrington said, but ultimately feels like he landed in a better spot because of it.

“Out of college, I was trying to get to the NFL, that was plan A. The CFL was plan B,” he said. 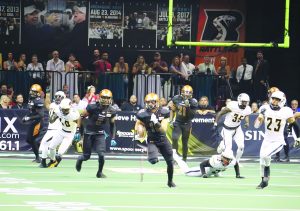 Harrington hopes his story will motivate kids who may be overlooked because of where they come from. (Photo submitted)

“But now, I’m on the best arena football team in history in Arizona and I’m becoming a franchise player. This is only my second season, and I’m leading the team in receptions and receiving yards. I’m second on the team in touchdowns with 18. Last year, we came up short and lost in the semi-finals. This year, we’re back and one win away from playing in the United Bowl, the Indoor League championship.”

It wasn’t just the destination that was atypical, the journey was too. After being overlooked by NFL and CFL teams, Harrington started working out for other teams, but never for the Rattlers.

“I didn’t workout with Arizona, but I sent them my tape. After that, I didn’t hear anything from them for about a month,” he said, adding that he didn’t expect to hear back. “But I got a call and they said they loved my tape and were sorry it took so long to get back. I talked to Kevin Guy, our head coach and also our GM and Jeff Jarnigan, our scouting director. They liked me, loved my tape. I got an invitation to training camp, made the final roster and have been here since.”

In his second season, Harrington is already emerging as a star in the league. He is ranked seventh in the league in receiving touchdowns with 14, and his two return touchdowns have him tied for the league lead. He’s also added two scores on the ground. His 696 yards rank him sixth in the league, and his 54 receptions tie him for fifth. 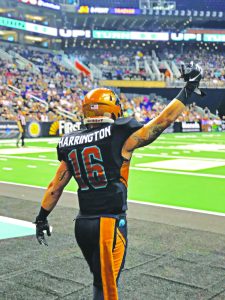 Harrington didn’t consider the IFL coming out of college, but was happy to end up on one of the most dominant franchises in the sport. (Photo submitted)

All of this despite the fact that Harrington is still adjusting to the style of play.

“It’s a lot different (than traditional football). It’s a lot faster, and more physical because the field is only 50 yards. As a receiver, we get a 10 or 12 yard running start. I had to adjust to that,” he said. “I had to change how I would run my routes. You can’t run routes like you did in the outdoor game. Last year, I was relying on my athleticism to get open.”

Harrington spent the offseason working with Rattler receiving coach Rod Windsor on his approach to the game. He credits that work for his success that he’s found this year.

“This year, I know how to run routes, to create space and read coverages. Coverages are different here with the safeties and corners. There’s only one linebacker.”

Ultimately, the speed and physicality are what he’s adjusting to most in addition to the dimensions of the field, which is half the size of a traditional football field.

“You’ve got to be dialed in, and focused,” he said of the change in playstyle. “Have to have your head on a swivel because there’s a lot of guys out there that run 4.4 and 4.3 (40-yard dash times) and they’re good and they make plays too.”

Harrington is proud of the path he took to get to the second highest level of professional football. His journey may not have been what he planned or expected, but his determination to succeed propelled him.

“I just want them to see that no matter where you come from, as long as you work and are dedicated to your craft that you can make it!”

Editor’s Note: An earlier version of this story said that the Rattlers left the AFL after the league didn’t play the 2009 season. It has been updated to reflect the proper timeline for Arizona’s move to the IFL.

Chadwell gets one last series with coach