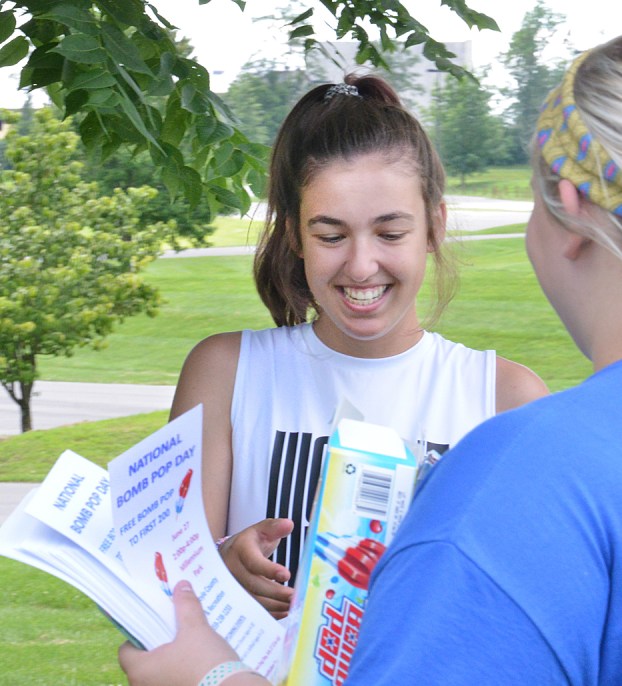 Grace Crawford smiles as she was surprised with a free Bomb Pop, courtesy of the Danville-Boyle County Parks and Recreation Department in recognition of National Bomb Pop Day. (Photo by Robin Hart)

Icy treats on a hot day

In recognition of National Bomb Pop Day Thursday, the Danville-Boyle County Parks and Recreation Department handed out the frozen treat to everybody at Millennium Park.

Parks and Rec Director John Bell said he wanted to engage people in a fun and “quirky” way and let them know that Parks and Rec was more than just organized programing that included baseball and soccer.

With each icy treat, he and Morgan Burger also handed out flyers announcing its dance classes, girls fall softball, karate and swim lessons.

In July, the department will hand out free hot dogs at Constitution Square in recognition of National Hotdog Day.

Chandler and Parker King, of Hustonville, enjoy their Bomb Pops under a shade tree Thursday afternoon. (Photo by Robin Hart)

Jonathan Shiflet enjoys his Bomb Pop treat while he took a breat at Millennium Park skate park Thursday afternoon. Shiflet had just received a new scooter for helping his mom work in the garden the day before. (Photo by Robin Hart)
You Might Like