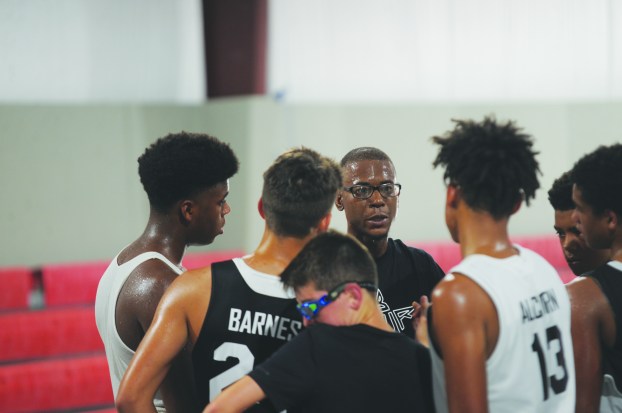 Hunter S. Thompson once remarked that he was more than a basketball fan, but an addict to the sport because he was born in the state of Kentucky. It is that belief and that love of the sport that has driven former Danville basketball coach Clifford Berry, together with his wife Sarah, to create something new in the region.

Up a gravel road in Junction City sits the Kentucky Athletics facility, the current home for Berry’s NuBreed Academy, and the two travel teams he coaches — the NuBreed Elite for middle school through high school kids and Team NuBreed for elementary school students.

Berry hopes that, through those programs, he can build a high-level basketball academy to rival the top names in the Amateur Athletic Union (AAU) circuits. His goal is to help prepare the area’s best high school basketball players for the game at the collegiate level and beyond.

“Nowadays, this is what it’s a lot more of, AAU basketball is helping these kids get to the next level,” he said. “So I wanted to be able to create a program around here so these kids will have something to make it and go to.”

Berry is a Danville native, was a four sport athlete at Danville High School, and was an assistant coach under multiple head coaches for the boy’s basketball team before becoming the head coach for the girl’s team. He left that program last year to focus on NuBreed and to build it up to what it is today. He believed that he would be able to more effectively help more kids reach their goals if he operated “outside looking in” as opposed to being a coach at only one school.

He said his decision to leave Danville was a tough one, but ultimately he felt it was best not only for himself, but also for the school. He also said that he had former players express a strong interest in returning to the AAU circuit. 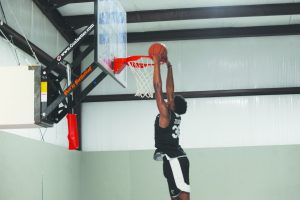 “It just got really difficult, and I decided to go back to our AAU program, which we’ve had for a few years,” he said. “Once I became the head coach (at DHS), I thought it would be best for me to step away and focus on that. This past year, I had a lot of my older guys that wanted to get back out there and play, and I told them this would be the year that we would take it seriously and try to get on a circuit and play tougher competition.

“They were serious. We won four tournaments this summer, got runner up in one, third place in another one. Those were Adidas sponsored events,” he added about his program’s immediate success. “I think now we’re starting to get our name out there. We’ve got three guys going out to The Camp One at KBC (Kentucky Basketball Commission) this weekend and we’ll be taking our team out there to play two warm-up games in front of scouts and stuff like that. We’re taking steps in the right direction right now with our program.”

Berry is well aware of the increased role that AAU is playing in college recruiting, and hopes that he can build a name that will draw interest from the big names in the NCAA. He contrasts the landscape of prep sports today to where it was when he was a player at DHS.

“When I was younger, growing up, it was just play where you are and if you’re good enough, the coaches will find you,” he said. “Nowadays it’s not that way. The AAU circuit has taken over everything. Now a lot of coaches find themselves at those events. You see a lot of guys, coach Cal and coach K at a bunch of those things. It’s something I never thought I’d see, especially coaches at that level going to those things.”

Right now, Berry’s focus is on building a group of talented players and getting them ready as they enter high school and begin their prep careers.

“We’ve got some great players here that I think you’ll be seeing for the next few years. Tommy Zeismer is at Boyle County, he’s going to be starting varsity even though he’s a freshman. Tramane Alcorn at Lincoln, Colton Ralston at Lincoln County, Owen Barnes at Boyle County,” Berry said. “These kids are going to be starting as freshmen. That’s something that I’m really proud of to have part of my program. It shows that we’re preparing the kids and getting them ready.” 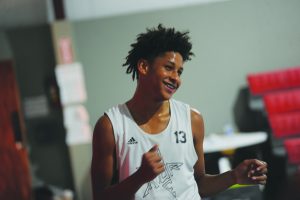 Tramane Alcorn smiles at his coach after Berry made a fast break layup over him. (Photo Derek Brightwell)

Although he’s mostly working with kids before they reach the high school level or early in their prep career, he wants to develop a relationship with the coaches in the area to work with the upperclassmen as well.

“Next year, I’m really wanting to collab with some of the coaches that have been doing a good job with their programs around here,” he said. “We want to get some of the sophomore and junior classes involved because those are the guys who are getting ready to go to the next level.

“I tell (the coaches), I’m not trying to steal your kids, we’re not trying to take them and build another school right now,” he added, laughing. “I want to help these kids develop and get better so they can go out and compete for their schools. It’s something I’m proud to go out and watch them and wear my Lincoln County shirts and my Boyle County shirts and check them out.”

However, the possibility of building a program similar to IMG Academy in Florida, that operates as a hybrid prep school and athletic training facility, in his hometown.

“Right now, I’m not really putting a lot of focus on that, but it is in the back of my mind. You see a lot of kids, just like the LaMelo Ball situation that just happened,” he said, citing the youngest brother of NBA player Lonzo Ball, who played at his local high school for two years before moving to an academy in Ohio and playing professionally in Lithuania and Australia. “He bounced around from academy to academy. You got a chance to see all these academies come out of nowhere and all these prep schools and stuff and you see how successful these kids are.

“I think we’re starting to build that. But right now it’s something we’ve got to work towards. But it is in the back of my mind because AAU and prep schools is where it’s at right now.”

He says that if that day comes, he will begin to look out of that state for talent to recruit to NuBreed, and believes that is the future of prep sports.

“That’s the only way you compete. A lot of people look at some parents and think they’re crazy moving their kids around the country. To me, I think that’s a parent who wants their kid to be successful,” he said of the transfer model. “They’re going to do what they have to do, and if that’s moving them to another town or state to help their kids get into better competition and seen by college coaches, that’s just what you have to do.” 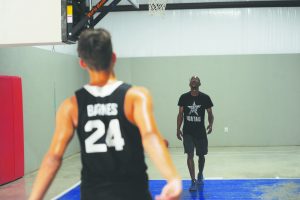 After practice, coach Berry is still instructing and rebounding for Owen Barnes as he shoots threes. (Photo Derek Brightwell)

Berry also acknowledges that the prep school route is not for everybody, and recommends that a kid only go that way if he is prepared for it.

“Like I tell most of them, don’t even take a step in that direction if you aren’t serious about it. Those kids eat and breathe basketball. If you want to go to one of those schools or build something like that you have to make sure you have that kind of atmosphere,” the former Danville coach said.

Berry is proud of his Kentucky roots, and proud of the reputation the state has around the sport of basketball. But he believes that there was a market for a training academy to prepare kids for success at the highest levels of the sport that wasn’t being tapped yet. He also believes that he was a natural fit in that role because of his background as a player and coach.

“It was really just sitting on the outside looking in and you hear a lot of people say that we just don’t really have a program to help our kids get out there and stuff like that,” he said of where the idea came from. “Someone had to take it on, and I figured, why not me? I know a lot of kids who are really serious about basketball. I figured I might as well take it on and take on all the headaches, because as much fun as it is, there’s a lot of headaches. I love to see these kids get the opportunity to get out in front of scouts and show what they can do.”

He also acknowledges that the popularity of football around the city of Danville, and the traditions of both Danville and Boyle County in that sport have overshadowed basketball in the region. He wants to change that.

“Many people, especially in Danville, football has been the staple, that’s what we’re known for,” he said. “So they never really gave credit to those basketball players that have come along and been really good and could’ve gone somewhere. They get lost in the shuffle. I want to try and erase that. If these guys want to play basketball at the next level, we want to have a platform for them to be seen.”

He also says that he wants to help open kids’ eyes to the options they have around the state to play basketball.

“In reality, we have a lot of colleges in Kentucky where these kids can go play basketball. A lot of these kids might not realize that you might not be recruited by Kentucky or Louisville right off the bat but if you go to Lindsey Wilson or Eastern or Western and have a good year or two, you can end up on that roster,” Berry said. “They don’t know that because they’ve never talked to someone who would encourage that. Most people would discourage them, say it’s way above their level or they’ll never make that level. I’m the guy that’s like ‘If we want to get there, this is what we need to do’.”

Ultimately, though, he tells them that if they want to play at the next level, it’s up to them.

“The ones who are serious, they put the work in. I tell them it doesn’t matter if I want you to get there, if you want to get there then it’ll pay off in the end.”