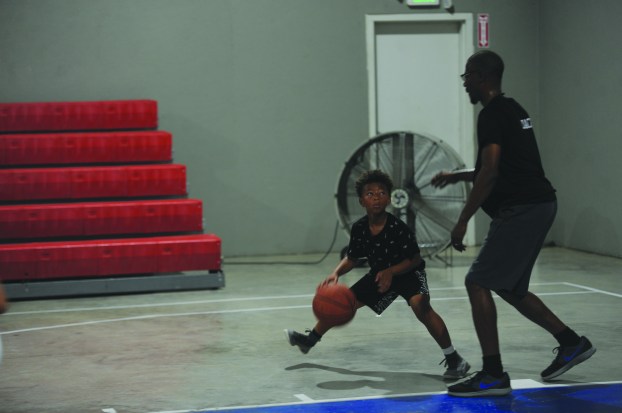 Kyren Burdette working on a step back with coach Berry. (Photo Derek Brightwell)

When Clifford Berry stepped down as the head girl’s basketball coach at Danville last year to focus more on his travel basketball teams and basketball camps, he wanted to build something bigger. He wanted to grow his NuBreed Academy and NuBreed Elite basketball team into a nationally recognized program that helps kids achieve their dreams of playing basketball collegiately and beyond. In June, they took a step toward that national recognition when they announced a partnership with Jr. NBA.

“When you have Jr. NBA attached to you, that makes you legitimate. Right off the bat, people are going to pay attention to that,” Berry said.

The Jr. NBA was reshaped in 2015, and serves as an outreach for the league to expand youth basketball nationally. Designed for children ages 6-14, Jr. NBA takes a modernized approach at teaching the game at an early age.

Berry admits that he is still learning a lot about the Jr. NBA, but the curriculum laid out by the program was already in line with NuBreed’s training style so the integration was smooth. He believes that this partnership will allow him to reach more kids who might not have been aware of these programs. 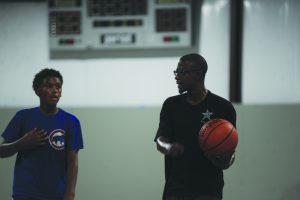 “The Jr. NBA is probably the biggest thing we’ve got going on for us right now because it allows us to play against different competition and we can bring different events down here to Danville that I’m sure they haven’t seen,” he said. “I know I didn’t see anything like it when I was growing up and I would’ve loved to have had this.

“To be able to bring something like three-on-three events and skills events down here for the kids. That will bring out kids who are maybe not part of the teams down here and can still participate in the events. It’s free to get in, all they have to do is come down here and sign up.”

The partnership will also help with his travel teams, as it allows them to play in bigger, national tournaments, and having the affiliation will earn the team respect immediately.

“There are teams that play, and they play some really good competition and I know that just because they’re not attached to a circuit like the Jr. NBA, people just don’t take it as serious,” he said. “So with us being able to do this makes people look at us completely different like we should be up there in that competition.”

While he’s aware of the vast network of Jr. NBA affiliated programs nationally –especially in areas with NBA franchises– he has only encountered one other team in the state of Kentucky, which he believes is a big advantage for his academy.

He is excited about what the partnership means not just for the players he’s coaching today, but for the players this program can reach. In the past, his teams have been able to go to WNBA games, and play on the Indiana Pacers’ court. With this agreement with Jr. NBA, those opportunities will be more frequent.

“Just different experiences like that is the stuff that will get kids interested and then show everybody else that we’re serious and this is a legitimate program that you’re going to have to pay attention to for the next few years.” 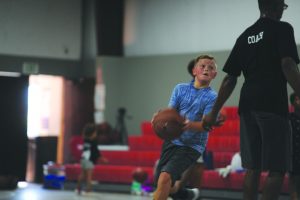 While right now, the attention is on the crop of players under his wing who are entering high school and playing in national tournaments –the U13 and U14 teams will be competing in Jr. NBA events to earn a chance to compete in the Global Championships in 2020– there is another group of younger players coming up through the ranks at NuBreed Academy.

“We deal with third grade, all the way to, we now got our freshman class. That group that started with as fifth graders, I’ve just built up year after year with them, adding teams under them,” Berry said.

The origin of the academy, and building it up year after year, came from Berry’s passion for the game of basketball, and desire to build something substantial in his hometown.

“A lot of that was coming from I wanted to make basketball my life. I love basketball, I’d love to just get up and do it every single day,” he said. “This was a way for me to do some personal training, some group training which we do on Thursdays and Fridays. It’s growing every single week. I’m getting more kids involved.

“I threw a spring break camp and another one over the summer. They were really successful, I loved the turnout on that. I grew up in Danville. I’m a sports guy. That’s just what I do. When this opportunity came for me to train kids and help them get to the next level, I just jumped at it.” 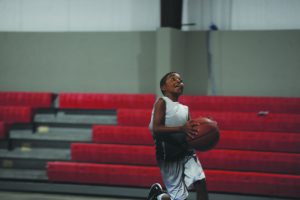 Landon Reed going up for a layup during a NuBreed practice. Reed was one of the younger students working with Berry on Thursday. (Photo Derek Brightwell)

Since March, NuBreed has operated out of the Kentucky Athletics facility on West Meigs Street. They plan on renovating it as they grow, but right now it’s a sometimes sweltering hot basketball factory where kids are learning not just the fundamentals of the game, but also more advanced techniques from a man with a long coaching pedigree in the Danville area.

Berry hopes to build something special, that the town can be proud of and that gets attention on a national scale. For him, he knows that it started with his first group, the group now entering the high school ranks.

NuBreed is an ever growing program for Berry, and it’s not just stopping at basketball. As the academy and camps grow and get more buzz, he also plans to start up a flag football league. A father of a young child, Berry has concerns about his son taking hits in football, and said that other parents in the area have expressed interest in a league in the past.

To help with the expansion of his program, and the scope at which it operates, Berry accepts sponsors for the travel teams that play in tournaments across the state.

Hunter S. Thompson once remarked that he was more than a basketball fan, but an addict to the sport because... read more