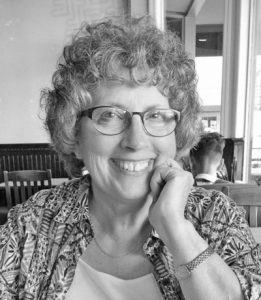 Joann was born on May 11, 1948, in Aberdeen, South Dakota and was the daughter of the late Bernie Lavern Hunstad and Catherine Agnes Kelly Pumphrey. She was preceded in death by her husband, Rex Edwards, Jr. She graduated from Danville High School in 1966 and began a career as a hairdresser in her father’s shop at 18. She owned and operated Joann’s Corner Cuts before retiring earlier this year and was known for always having a smile on her face. Being a grandmother was one of her greatest joys, and she enjoyed sharing stories about it. Joann loved her church and was a member of Centenary United Methodist Church and very active with missions and the Volunteers in Missions Team. She loved helping others, often going on out of state trips to areas affected by hurricane damage and was proud to say that she had her very own toolbox! Joann worked passionately with the Samaritan’s Purse Operation Christmas Child program that collected and sent shoeboxes overseas to children for several years and helped run one of the local collection points. She had also volunteered and fostered with the Boyle County Humane Society, and a favorite pastime was attending auctions.

Visitation is 6-8 p.m. Friday at Centenary United Methodist Church and after 10 a.m. Saturday. A Celebration of Life Service will begin at 11 a.m. Saturday with Rev. Chris Morgan and Rev. Sean Ryan officiating. Honorary pallbearers are the members of the Sonshine Sunday School Class. Private burial will be at a later date in Bellevue Cemetery, Danville.

Memorial contributions are suggested to Operation Christmas Child (please pack a shoebox in her memory or make a donation to Centenary United Methodist Church with Joann Edwards OCC Memorial in the memo line) or to a Humane Society or pet rescue group of your choice. A guestbook is available at www.wlpruitt.com.