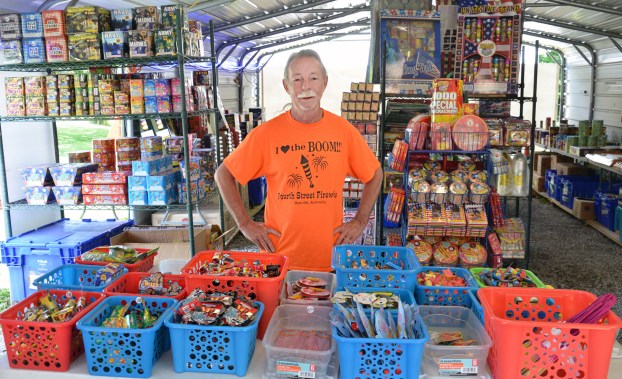 Ray Boone’s side business keeps him busy only about two or three weeks out of the year, but it’s the one that he enjoys the most. 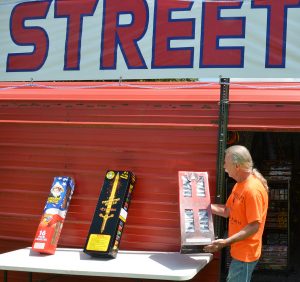 Ray Boone sets out a few of the most popular fireworks in front of his stand at the corner of Fourth and Second streets. (Photo by Robin Hart)

For a couple of weeks before the Fourth of July, and just three days after, Boone opens his Fourth Street Fireworks stand at the corner of Hustonville Road and Second Street. The bright red metal building is located just a few yards from his full-time business, the Little Sign Shoppe.

Boone spends his days making custom signs for his clients. But in the afternoons and evenings this time of year, Boone hangs out at his fireworks stand with his brother, Calvin Boone and friend, Mark McKinney, who also help sell the fireworks.

“We just do this for fun, mainly,” Boone said. “I love fireworks because it’s a celebration of our freedom.”

Boone said he’s always loved fireworks, “ever since I could light a firecracker,” he said laughing. Eight years ago, when he was thinking about opening up his own stand, he visited a dealer in Somerset nine times in 11 days. “I just love ’em. I’m crazy over ’em. Just give me more,” he told the dealer.

“People said, ‘you lost your ass,'” Boone said. But every year since then he’s built up his clientele, especially since he’s a local dealer and not one that just comes in from out of state temporarily, he said.

Because of its success, for the past three years, the Fourth Street Fireworks stand has given a portion of its proceeds to the Danville Fire Department’s Christmas toy drive.

This year, it will be helping to support Heritage Hospice’s annual veterans appreciation luncheon, Boone said. “We’re the local stand. … We’re going to put the community’s money back into the community when it’s spent here.”

Boone said the business basically runs for just three weeks, but “It wears me out. I lose 10 pounds every year.” Last year, he didn’t have a belt small enough to fit him so he made a “bungee cord belt,” he said.

One thing Boone and his workers constantly watch out for are people smoking. It’s a state mandate for there to be no smoking within 200 feet of a fireworks stand. “People get out of their car and they have a cigarette in their mouth. Or they’re getting ready to light up,” Boone said. But they can’t get near the stand. “We walk out to them and say, ‘Hey buddy, I’m a smoker too,” but you can’t smoke around the explosives, he said. 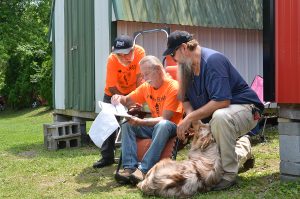 Owner of Fouth Street Fireworks, Ray Boone, center, talks about the inventory he has with his brother, Calvin Boone, left, and Mark McKinney. Ray Boone’s dog, Trump, likes to sit near the guys when their working at the stand. On the night of the Fourth of July, Ray Boone will still be working at his stand, but will still be able to enjoy his own fireworks show when his friends ignite it and is blasted high in the sky for him to see. (Photo by Robin Hart)

Boone owns four acres behind both of his businesses and uses the open space to set off his own fireworks. “We shoot the heck out of ’em. We test every firework that we sell.”

Anytime someone comes in and asks what a particular fireworks looks or sounds like he says, “Come get one, here’s the best way to find out.” Then he sends them out to the field with one of his workers and they shoot it off — for free.

There are smartphone apps available that scan the barcode and show what a particular firework can do, Boone said. But “I don’t like it. … I like the mystery.”

He will enthusiastically tell a customer, “It pops. It cracks. It fires a kaboom!” Then the customer gets excited, he said.

“Guys like the big heavy stuff. They don’t want no sparklers,” he added.

The best part of owning a fireworks stand is that he can get out of his shop and “Sitting out here, hanging out, hoopin’ and hollerin’ and gettin’ up meeting and greeting people, and educating them. You know we’re big about fireworks education because we want it to be safe,” Boone said.

Tomorrow, July 4th, Boone will be sitting in a lawn chair at his stand selling fireworks all day. That night, he’ll have to miss the city fireworks show because he’ll still be open, Boone said.

But he’ll be able to kick back for a while and look up in the sky over his building and watch his own show that will be ignited by his friends. And Boone will welcome neighbors, friends and passersby to stop and enjoy the show, too.

Authorities are on the hunt for a man who robbed the Farmers National Bank branch Tuesday afternoon. The man entered... read more