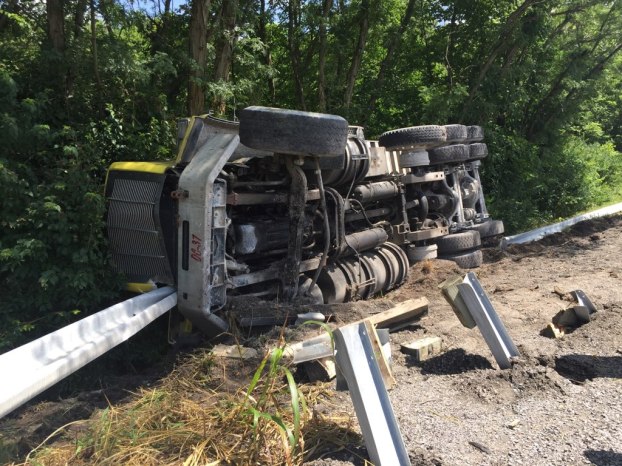 A dump truck sits on its side after wrecking along U.S. 127 north at the Boyle-Mercer county line Friday afternoon. (Photo by Boyle Emergency Management Director Mike Wilder)

UPDATE 7 p.m.: The scene has been cleared and both northbound lanes have been reopened.

An overturned dump truck is affecting traffic on U.S. 127 between Danville and Harrodsburg this afternoon. The northbound lanes of the highway could be closed for up to two hours while a wrecker gets the dump truck back on its wheels and towed away, Boyle County Emergency Management Director Mike Wilder said. 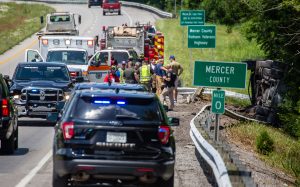 First responders work at the scene of a dump truck wreck along U.S. 127 at the Boyle-Mercer county line Friday afternoon. (Photo by Ben Kleppinger)

The dump truck wrecked while traveling north on U.S. 127. Its front right tire blew out and it traveled off the righthand shoulder and into the guardrail, landing on its side about 80 feet over the county line into Mercer County, Wilder said.

Tire blowouts on big trucks like that can be bad news for the driver, but in this case, the driver was able to walk away with only minors cuts and scrapes. He was treated at the scene by EMS personnel, but didn’t even need any stitches, Wilder said.

The driver was hauling a load of gravel when the truck overturned. Wilder said some fuel may be leaking from the vehicle, but it’s impossible to know for sure until a wrecker can move the vehicle.

The wrecker was headed to the scene from Kings Mountain Friday afternoon. Once it got to the scene, Wilder said he anticipated the northbound highway being shut down — it was already down to one late shortly before 3 p.m. Wilder recommended traffic needing to get to Harrodsburg use Faulkner Lane to cut across to Ky. 33; take Ky. 33 to Ky. 152 in Burgin; then take Ky. 152 west to Harrodsburg.

Members of the public are getting an uncommon chance to see inside Boyle County’s jail, thanks to a series of... read more