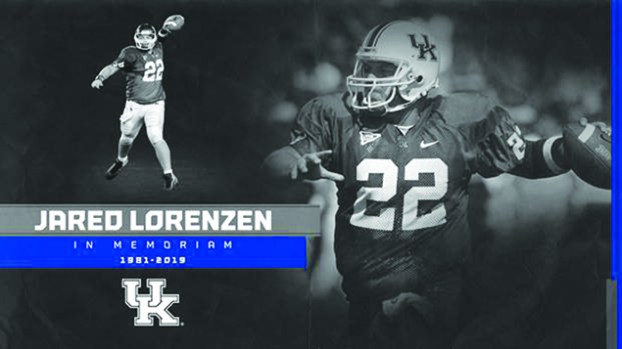 Former UK star Jared Lorenzen passed away Wednesday less than a week of being admitted to the hospital. (UK Athletics)

I probably have a 1,000 Jared Lorenzen memories I could share with you starting with the first time I went to Fort Thomas to watch him play high school football to when he committed to UK to when he made some dazzling plays for the Wildcats to when I shared a speaking podium with him.

I could share about watching him kneel at midfield and throw the ball through the goal post or stand 25 yards away from me and whistle the football by my shoulder — after warning me not to move and definitely not try to catch the football because it would break my fingers (and he was right).

However as I checked social media Wednesday after the news about the 38-year-old Lorenzen’s death, I saw so many inspirational statements that truly define why he is a true Kentucky legend. A three-sport high school star at Highlands who won Mr. Football honors and captured the hearts of UK fans not only during his career but after it ended.

So why not just share the love from so many others?

West Virginia head coach Neal Brown played with Lorenzen at Kentucky. “Extremely saddened by the news of Jared Lorenzen’s passing today. A friend and former teammate that is gone way too soon. Our thoughts and prayers go out to his family, especially his children. Jared was a great athlete but also a wonderful personality. Very sad day for KY,” Brown tweeted.

From former All-SEC tight end and nine-year NFL veteran Jacob Tamme: “Man. RIP Jared Lorenzen. One of the most unique and kind-hearted teammates I ever had. Very very sad to see you go.”

From current Penn State receivers coach Gerad Parker: “What a terrible loss, always will remember #22 and his fun loving personality! Thoughts and prayers to the family and sure hope everyone finds peace and acceptance during this tough time. A great teammate and friend and Kentucky has lost a great one. Love ya!”

This post from former UK quarterback Patrick Towles really got to me because I had talked to Lorenzen numerous times about Towles and also had Towles explain to me several times just how much Lorenzen meant to him: “Jared was in incredible player, coach, and man. Having him as my QB coach in high school (at Highlands) was such a privilege. He made me such a better player and person. I will miss you so much Coach Lo. Throw some touchdowns in heaven.”

Touchdowns in heaven? How can you not smile just thinking about that?

Kentucky recruiting coordinator Vince Marrow had grown to love Lorenzen and tweeted:  “Man I’m in Denver and I just got the news on Jared Lorenzen I’m lost for words BBN we lost a great man. Jesus keep his family in your arms.”

Former Cats Pause publisher Oscar Combs, like me, watched Lorenzen both in high school and college. He also understands how special it is when a UK player connects with fans statewide like Lorenzen did. Here’s what he posted on social media: “So, so saddened by the passing of UK’s legendary quarterback @JaredLorenzen22 today at age 38. A really wonderful human being who so loved people & UK fans. A great friend and a Wildcat we’ll all miss. Our prayers to his family during this very difficult time.”

From former UK gymnastics coach Leah Little, who is now marketing director for the Kentucky High School Athletics Association: “Please don’t let this be true, my heart is so sad. Rest in the arms of Jesus Jared big blue nation loves you. His heart was as big as he was. Gone but never forgotten.”

She nailed it. Lorenzen’s heart was oversized and maybe that’s why he was always so willing to give and help others. And gone but never forgotten is exactly right.

Many of you might not know Tony Neely but he’s instrumental in Kentucky football with his role as sports information director for football for years before he moved more into administration a few years ago. Here’s what he posted about Lorenzen: “ Like everyone else, I marveled at the incredible things he did as a player. It was a privilege to be his sports information director; his cooperation and good humor with the media made the job infinitely easier … Jared gave so much to UK, our fans, the media and everyone he met. I’m glad he had so much joy when we were able to give something back to him. Jared, we loved your greatness, and we loved your humanity. Thanks for everything, Godspeed and rest in peace.”

Lorenzen did give a lot to everyone. He was a media darling because he never disappointed us with his play, his honesty about his play and his sense of humor. He loved UK fans and became one of UK’s biggest fans — and no pun intended there. He loved being Jared and we loved him being Jared.

Never ever never did I think about outliving this special athlete who was almost 30 years younger than me. I feel for his family — I loved getting to know his mom during his recruitment.

I know this reminds me to obviously pay better attention to my health but also to make sure I enjoy every day like Jared Lorenzen did. He’ll be missed, but it’s obvious he won’t be forgotten. He’s truly a Kentucky icon and that opening game Aug. 31 at Kroger Field hopefully can be a celebration of the good times he provided for all UK fans as well as the start of another successful season.

Calipari excited to have starters returning

For just the second time in his 10 years at Kentucky, John Calipari will have a starting point guard returning... read more