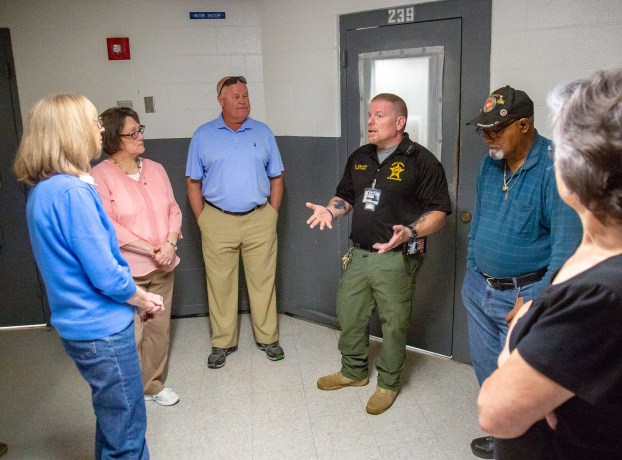 Captain Danny Sallee explains how the Boyle County Detention Center has too many inmates to operate its maximum security cells in the ideal way. (Photo by Ben Kleppinger)

Members of the public are getting an uncommon chance to see inside Boyle County’s jail, thanks to a series of jail tours for the public hosted by jail staff and members of Boyle County Fiscal Court.

The first such tour was given for around half a dozen local residents and Magistrate Jamey Gay on Monday. 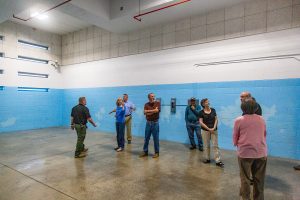 The tour walks through the jail’s indoor recreation area, which doubled as housing for inmates in the past when overcrowding was a bigger problem than it is currently. (Photo by Ben Kleppinger)

“This jail has been here 21 years,” said Captain Danny Sallee, one of the group’s tour guides through the aging structure. “It’s seen better days.”

Sallee and Lt. Michael Clem led the group through the jail’s state side, where it houses what Sallee said is one of the most successful substance abuse programs in the state. They took them to see the jail’s indoor and outdoor recreation areas and explained how the indoor area was turned into a housing space for inmates back a couple years ago, when the jail’s population was more than 100 inmates more than it is today.

They showed them uneven and warped floors, leaking ceilings and the jail’s GED classroom and staff break room — both of which are repurposed halves of old visitation rooms.

They took them by a former closet that is now used for attorney visits and explained how the jail’s poor design creates all kinds of problems today. There are 90-degree corners and doors with space behind them almost everywhere you look, Sallee pointed out while stepping through a door and into a corner, disappearing from sight of the group even though he was only a couple feet away.

Sallee said it wasn’t a good idea when the jail was built in 1998 to make it part of a complex that also houses the Boyle County Road Department and EMS. He also said he thinks the design flaws reveal the county just went with the lowest bidder without thinking enough about how long it would need the facility to last.

Clem said given all the things that go on in the jail, he certainly never has a boring day at work.

“It’s always something new every day,” he said. “About the time you think you’ve got everything done, something else happens.”

The jail tours are an idea that really took root during a recent public input meeting, Magistrate Gay said. 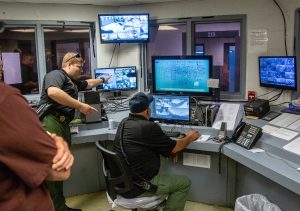 Lt. Michael Clem, left, points out something on a security camera during the tour’s visit to the jail’s central control room. (Photo by Ben Kleppinger)

Jailer Brian Wofford came up with the idea and Gay embraced it; residents could sign up for the tour during the town-hall-style “Pulse of the People” event for Gay’s district.

Gay said he expects every one of the county’s six magistrates will eventually take a group of constituents with them for a jail tour. Those interested should contact the magistrate for their district.

Gay said the jail tours are important because the county has “a huge decision” to make. Magistrates are in the process of pursuing either an entirely new jail or a floor-to-ceiling renovation of the existing one. Both options were estimated to cost more than $30 million by a jail study completed last year; the renovation was estimated to be more expensive than building new.

“We want to get the feedback from our constituents and let them see the jail first hand, and see what we’re up against,” Gay said. “It’s a big-ticket item but it’s something we are constitutionally required to do as a county, so we’ve got to find a way to make it work.”

John Turner, one of those who attended Monday’s tour, said he already thought a new jail was probably needed, but after seeing the conditions inside the jail firsthand, “I’m convinced that it’s a good idea.”

“Any money you put in this now to try to fix, you’re just throwing that money away,” said Turner, a retired paramedic who has also seen the inside of another incarceration facility — he volunteers with the Mutts With Manners program at the nearby state prison, Northpoint. “… Nobody wants to spend the money. I don’t want to spend the money. But guess what? We have to. It would be a money pit trying to keep this thing useful.” 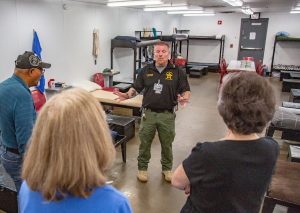 Captain Danny Sallee shows the tour group what a cell on the state side of the jail looks like. (Photo by Ben Kleppinger)

A police pursuit, a ravine crash and a bank robbery in Danville — it was a busy 24 hours for…

Local law enforcement officers had plenty to do even before the Fourth of July holiday hit this week. On Tuesday,... read more