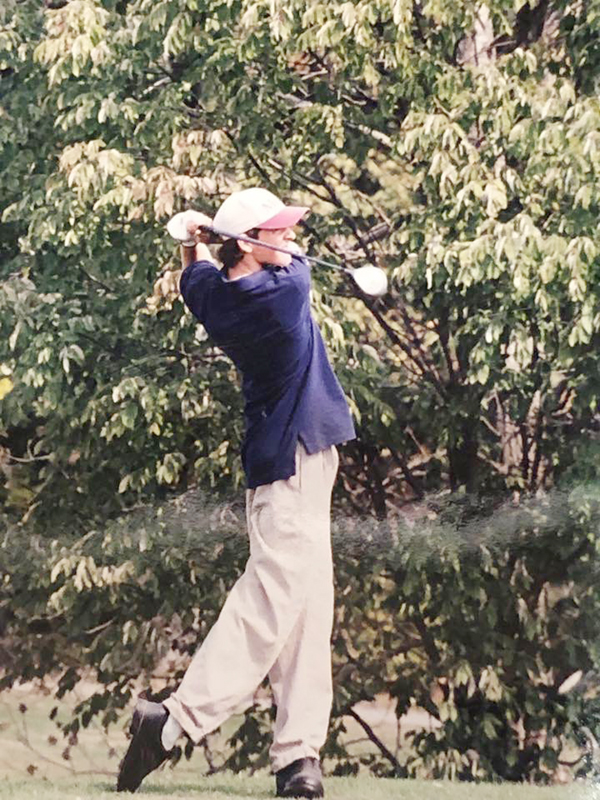 King's mother, Angela Osborne, knew she wanted to start something in her son's honor on the last day of his life. (Photo submitted)

Twenty years ago, Angela Osborne lost her son, Seth King, in a car accident. King was a student at Danville High School, where he was a standout on the golf course. That year, she decided that she would start something to honor his memory. The Seth King Memorial Tournament was born.

Today, the tournament, which will be held at Old Bridge Golf Course at noon on July 13th, is celebrating its 20th birthday and is going stronger than ever. For the last 10 years, they have been able to give away a scholarship to a community golfer who will be playing at the collegiate level. This year’s recipient is Mercer County’s Bekah Upchurch.

The golf scramble serves as much as a fundraiser to give away the scholarship as it is a chance to honor the life of Seth King. Today, his former teammate and friend Dan Schott serves as the tournament’s director, and has been for the last decade. For him, it’s a chance to see old friends, do what they love to do, remember their friend, and give back to the community.

“It’s beneficial for us to get together and remember Seth. But it’s also a good reason to do what we do, and that’s get together. Half of us were six years old and playing together then. Getting the chance to just get together and catch up and even just sit and talk is amazing.”

For the friends and teammates who come in, some from as far as Charleston, Spartanburg and Atlanta, the tournament is a “family reunion.”

“Most years, that’s the only time we see each other,” Schott said. “We’ve got a whole group of guys that come together every year just to remember Seth and get together and celebrate his life and our friendship. It goes hand in hand. It’s a big celebration.”

The scholarship’s amount varies from year to year, depending on sponsorships and donations. The entrance fee to participate in the tournament is $50, with mulligans available for purchase at $10. The entrance fees pay off the golf course, shirts, and food that are provided for the participants. The sponsorships range from $100 hole sponsorships to corporate sponsors who donate more than that.

“What the amount is going to be, I won’t know until then, because I’ve still got checks coming in that I didn’t even know where going to come in, plus what’s in the mail,” Schott said. “It’s usually about two or three weeks after (the tournament), I think last year we gave around $3500.”

The recipient of the scholarship is mostly chosen by Sandy Waters, former Boyle County girls golf coach, who reaches out in the community to find candidates.

“I have watched many of the recipients play their high school golf and grow into fine young men and women,” Waters said. “I’ve met their parents and seen the sacrifices they make to help their son/daughter to excel at this amazing sport.”

It hasn’t been an easy journey to make it to year 20. Ten years ago, Osborne let Schott take over. She said she was having trouble raising funds for it, and it was tough on her emotionally. She said that every year she gets choked up thinking about the tragedy that created the tournament, but is happy that it’s been able to turn into something that helps young student athletes achieve their dreams.

The most important thing for the foundation, in regards to the scholarship, is keeping it local, and finding someone who will benefit the most from it.

“We look for someone who’s going to play collegiately, and someone who needs it. If they have a full ride, or whatever that’s not who we’re looking for,” Schott said. “We’re looking for someone who could use the money for books or even golf equipment. Some of the schools we’ve had kids go to, they haven’t had the budget in their golf for new shoes or rain gear. (But) we don’t dictate what they do with it.”

Past recipients have included Madeline VonLinger of Boyle County last year, Brennan Walton of Mercer County the year before, Lincoln County’s Kaycie Bandura the year before and Dakota Jarman of Boyle County. Both Osborne and Schott are committed to making sure that the winner is someone from a local school who will be playing golf at the next level.

“We’re doing it the right way for the right reasons. We’re giving it away locally. It’s not going to Lexington, it stays local in that area,” Schott said.

As a golfer, King’s swing was described as “a work of art”. He was laid back and never got nervous in big moments.

“We’d be going into a tournament and are all nervous and scared and he was just relaxed, show up and shoot 72,” Schott said of his friend and teammate. “Then he’d look at us like why are you worried man? You’d see him just walking around the golf course, he just didn’t have a care. His game reflected that.

“He knew he couldn’t hit it as far as others, and he didn’t try. But he could putt. He could wear you out on the green.”

Osborne said that she doesn’t know where King’s love of golf came, as both his parents were runners. But he took to the sport immediately.

“I remember when we first moved to Old Bridge and he was scared to death to meet Bruce. I took him to the clubhouse one day and he was just as nervous as he could be,” she said. “I introduced him because I had known Bruce from Dick’s River Country Club, so they got together. And unbeknownst to me, my dad had went to Bruce and told him whatever Seth needed to give him and he would pay for.

“I know growing up, there was a very large group of us. Some of them played at Old Bridge, others that played at Danville Country Club. There was probably 30 of us that were extremely competitive,” Schott said of the environment they grew up in. “So we were always playing and I know from experience he was always out on the golf course.”

“And, from my experience there are worse places for your kid to be than on the golf course,” Osborne chimed in.

For Schott and Osborne, while the charity aspect and the scholarship are important, remembering Seth King is equally on their minds during the day, and Schott intends to keep it that way.

“Angela is heavily involved the day of. Family members come in and donate. But I’ve always wanted to keep it the Seth King,” he said. “In the end, it’s just about Seth. I will not see it change as long as I’m running it. Just the reminder, every year we take time before we start to remember Seth. As much as I can get the juniors involved and make them aware of who Seth was and what this was created for and who he was a golfer, because that’s where want to keep the remembrance. Because his free flowing attitude was just that. It was infectious. To keep the two touching is extremely important to me, and they support as much as they can.”

The tournament is still accepting donations, and will be accepting entrants right up until the noon start time. Schott wants people to know that the money they give for the event is going to something important to him and the community.