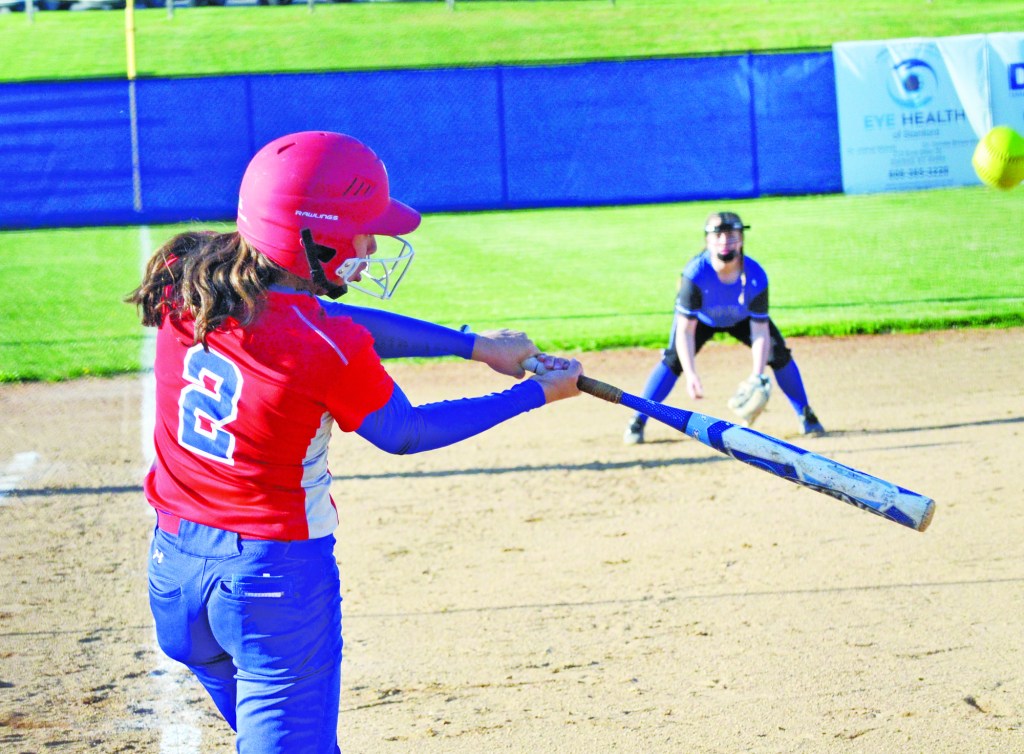 Maddy Boyle hitting a home run. She was a standout at three sports at Lincoln County, but will focus on basketball as she heads to college. (Photo Nancy Leedy)

“I’ve known since a young age when she was brought up from middle school, when I pull up younger players, that she was a little, as most people say, fireball, spitball, a fiery competitor and just a really, really all-around good athlete,” she said.

McWhorter watched Boyle blossom on the basketball court to become a standout athlete to the point where she was recruited by colleges and signed by Kentucky Wesleyan College before her senior season.

But Boyle didn’t just stand out on the hardwood. She was also a valuable defender on the soccer pitch and a versatile contributor on the softball diamond.

It was those starring roles on the Lady Patriot basketball, softball and soccer teams that resulted in Boyle being named The Advocate-Messenger Female Athlete of the Year for 2019.

“I’m very, very competitive,” said Boyle, who was awarded the Triple Threat Award by the KHSAA this year for her being a three-sport athlete. “I hate losing. That’s my biggest thing. I absolutely hate losing and I will do anything to win.  So I think, going into games, going into practices, I’m more that killer mindset type. We’re doing this and we’re doing this for a greater purpose and that greater purpose is to hopefully win district, win region, win state. I just went into every game with that killer mindset … I want us to absolutely kill someone.”

Boyle’s role as a multi-sport athlete was established at a young age as her parents, Jeremy and Tracie Boyle, signed her up for different sports.

“My mom always told me I’ve never liked Barbies and hair bows. I’ve always been the tomboy in my family, most definitely. I’ve always had a ball in my hand,” Boyle said. “It was the fact that I wanted to play and the opportunities that my parents got me in. Soccer was my very first sport. My parents coached rec league when I was 4 or 5 and they got me started. Basketball and softball were both pretty early, too. My dad loves sports and he started me early in all of them so that I could be good, hopefully.” 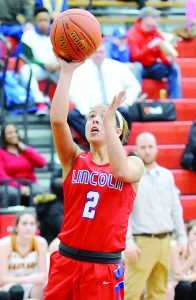 Maddy Boyle was a 1,000 point scorer during her basketball career at Lincoln County. She’ll be playing for Kentucky Wesleyan College next year. (Photo Nancy Leedy)

Jordan Ward, who just finished his first year as LCHS softball coach, only had Boyle as a player for one season but, like McWhorter, knew early on what type of competitor she was.

“I’ve known Maddy for quite a while. We used to be neighbors,” he said. “I’ve seen Maddy since she was 10 or 11 years old. I mean, the kid had a work ethic back then when she was young. There wasn’t a day go by that she wasn’t outside with a basketball in her hand. Me and my daughter would be out and she’d come over and throw around with us. Just anything.”

Boyle played shortstop and was the Lady Patriots’ leadoff hitter. She had a slashline of .356/.402/.678 her senior season and was named All-District and All-Area. She went 32-for-90 at the plate with seven doubles, two triples and six home runs. She drove in 16 runs, scored 25 runs and stole 10 bases.

“She was exactly what you wanted out of a shortstop. A leadoff hitter/shortstop – you couldn’t get a better kid for that spot,” Ward said. “Maddy was a great teammate. She was a leader. She treated younger kids really well. She led by example. She just brought a lot of energy to the team.”

“She was something special. I wish I had more than a year with her.”

Unlike Ward, McWhorter had the opportunity to coach Boyle for several years as she and her staff pulled up the young point guard to the LCHS Lady Patriot varsity basketball team when she was a seventh-grader.

“She reminds me a lot of myself. She’s always been kind of the under-sized guard and maybe people overlook her because of her size but she’s just got that fiery competitiveness about her. You could see the talent she had early on and she continued to get better and better,” said McWhorter.

In her six seasons in the Lady Patriot uniform, the 5-6 guard and her teammates posted a win-loss record of 135-52, which included five straight 45th District titles. The Lady Patriots reached the semifinals of the 12th Region Tournament four times, including two runner-up finishes against eventual state champion Mercer County.

Boyle joined the 1,000-point scoring club before capping her high school career, scoring 443 points in her senior season to put her at 1,357 points overall. She averaged 14.3 points a game her senior year, shooting 54.5 percent from the field and 85.7 percent at the foul line.

“Other than the energy and the competitiveness that she brought, she was the floor general as the point guard,” McWhorter said. “She was, as they say, ‘The gas that made your car run. The motor in your car.’ When she went the way that she was capable of, the team performed at its highest level with all the talent she had around her.”

While it was on the hardwood and the softball diamond that Boyle and her teammates met with the most success, soccer has always been her favorite sport.

“I’ve always told everyone growing up that soccer was my favorite sport. Soccer was my first sport. I’ve always loved it the best,” she said. “The kind of thing that really hurt was the fact that my dad was the middle school softball coach and, in middle school, softball and soccer ran at the same time, so I had to choose. And I chose to go with my dad, which I feel like most people would.”

In her senior season on the LCHS soccer team, Boyle and the Lady Patriots posted a 6-10 record. Boyle, who did not play soccer her junior year, was named All-District in both her sophomore and senior seasons.

As Boyle makes the jump to the collegiate level in athletics, she knows she won’t be able to be the multi-sport athlete any more. 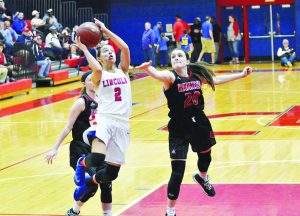 Maddy is sad to leave behind the other two sports, but realizes basketball will take up all of her time in college. (Photo Nancy Leedy)

“Basketball is just one of the longer of the sports.  It will take up all my time so I won’t have time to play soccer and softball like I have before,” said Boyle.

Boyle admits that she will miss playing soccer and softball.

“If I’m being completely honest, I’m going to miss soccer the most. Really and truly, I already miss soccer. There’s many times that I say, ‘I miss soccer so much,’” she said. “I’m going to miss softball and the relationships that I’ve built, but the kind of game is different. Basketball and soccer are both so team oriented and softball is, too, but the loneliest place in sports is at the batter’s box … I feel like that’s a kind of individual sport. I’ll miss it.”

The LCHS girls basketball, soccer and softball programs will not be the same without Boyle on the hardwood, pitch and diamond. McWhorter has no doubts that Boyle ranks among one of the best in the history of Lincoln athletes – and the area.

“There are a lot of very athletic young ladies in this graduating class, and not just at our high school,” she added. “I’ve always thought Maddy was one of the top, if not the top, all-around athletes that’s come through the area. She’s just one of those kids that, no matter what she picks up, she’s just a natural at it. She’s got a natural ability – no matter what sport.”