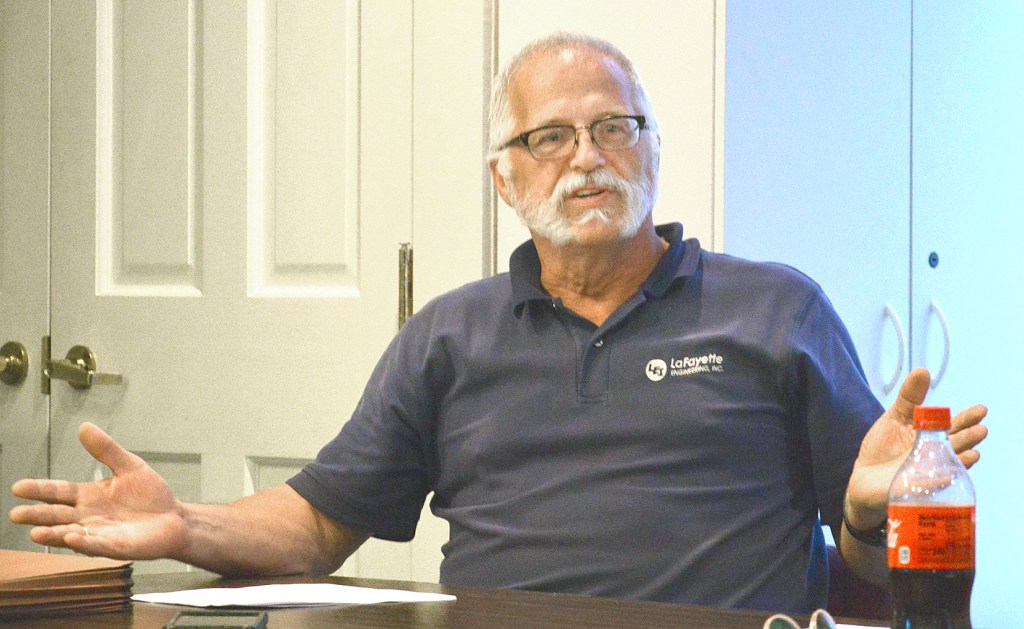 Perryville Council member Carlos Miller questions why the city council should consider a smoking ban if the county fiscal court was thinking about a countywide ban which would include Perryville, during Monday night's public forum. (Photo by Robin Hart)

The Perryville City Council listened to a handful of residents and public officials politely state their opinions Monday night on whether or not a smoking ban should be enacted within the city limits. At the beginning of the meeting, Mayor Brian Caldwell said the issue of a possible smoking ban would be addressed at the next regular council meeting, which will be at 7 p.m. Thursday.

The smaller than expected crowd didn’t fill all the seats in the community center, and it took only about 30 minutes to hear the exchange of opinions and allow council members to ask questions.

Speaking first at the informal public forum was Laurie Goode, who initially asked the council to consider a smoking ban several months ago.

Goode told the council, “You guys don’t have any issues telling private homeowners how tall their grass can be or if they can have a pet pig. … So what’s the difference in telling a business owner that’s open to the public that they can’t have people smoking in there because it’s a public health issue?”

Boyle County Health Department Director Brent Blevins said he thinks a smoking ban in public places is similar to regulations for restaurants and food establishments. “We’re holding people accountable because we’re trying to stop public health issues, whether it’s disease spread or whatever. … When there are regulations, they greatly help the health impact in the community.”

Kathy Miles, coordinator for the Boyle County Agency for Substance Abuse Policy, told the council that the organization had recently voted to urge Boyle County Fiscal Court to enact a countywide smoking ban because of the negative effects of secondhand smoke. Two magistrates, Tom Ellis and John Caywood, who attended the forum sat quietly in the back row listening to the speakers.

“We can and must prevent” the effects of secondhand smoke,” Miles said. “Boyle County can do better for its residents, for its visitors, for its tourists and for its children, who will be our adults of the future.”

Former health department director Roger Trent, who was instrumental in getting Danville’s smoking ban enacted more than 10 years ago, said, “Everybody has a right to breathe air. You have the privilege to smoke if you choose to do so, wherever you choose to do so, except in public places. … Smoking is a personal right. It’s a privilege. But your right to smoke ends where my right to breathe … where my nose starts.”

On the other hand, several Perryville residents voiced their opinions that they felt it was the right of the business owner to decide whether or not to allow smoking.

Scott Land said the issue of a smoking ban concerned “liberty and justice. They are never directly on the ballot. … That will never be put up for a vote. … What happens is, these organizations make decisions every day that either support those basic concepts or they slowly chip away at them.”

Land acknowledged that smoking and breathing secondhand smoke had negative health impacts. However, because tobacco is legal to grow, sell and possess, “I’m worried about eroding the idea of personal responsibility.”

Another resident also spoke in favor of business owners making the decision whether or not to allow smoking on their premises. “I’m very torn about this,” she said. “I know smoking is terrible for you, but I have a hard time saying to a business owner, within the parameters of those walls, he or she can not make the rules for what happens there.”

Answering a question about if Boyle Fiscal Court was considering a countywide band, Blevins said he proposed the idea to the court, which agreed it would consider the ban.

In about three weeks a committee looking into proposing a smoking ban, led by Magistrate Jason Cullen, will be meeting to discuss the next steps. “There’s no vote and nothing written yet, as far as a model ordinance yet. … But we are moving with that,” Blevins said.

Council member Carlos Miller said it seemed that if the county decides to have a smoking ban, which would include Perryville, there wasn’t any reason to “get people all in an uproar here.” He suggested the council wait and see what the county decides.

Perryville Attorney Jeff Johnson told the council whatever the county decided to do in the future regarding a smoking ban, Perryville would have the option to make it stricter, but would not be allowed to make it less restrictive.

Mayor Brian Caldwell ended the forum by saying, “We’ll see where it goes from here.”