Reese Smith honored as Male Athlete of the Year 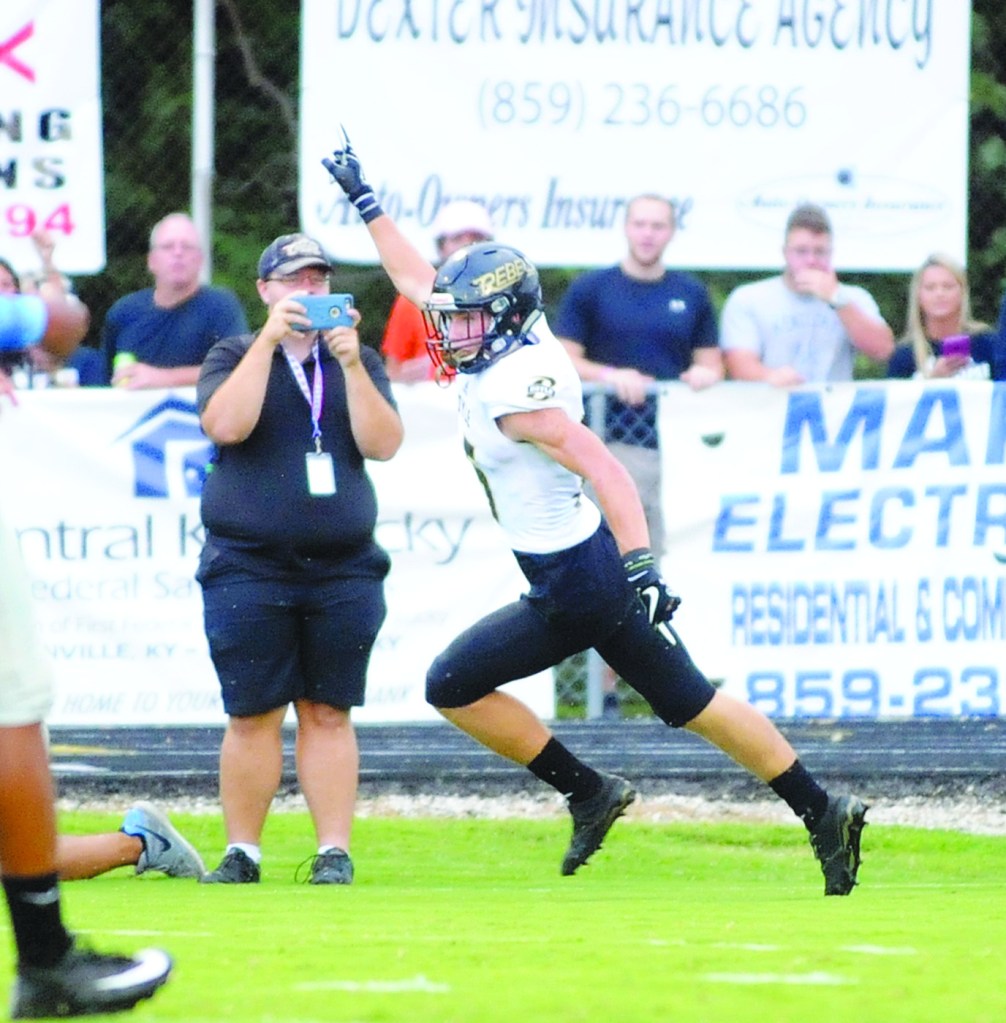 Reese Smith said that he is proud of the tradition at Boyle County, and can say where he's from with pride whenever anyone asks. (File photo Matt Overing)

Boyle County senior Reese Smith has accomplished a lot in his first three years as a Rebel. The three sport athlete has scored 1,000 points in basketball, won multiple state championships as part of relay teams in track and field, and has set numerous school records as a receiver in football.

“I broke two school records. I had the longest receiving touchdown, which was 93-yards. I set another school record for the most receiving touchdowns in a season with 20,” Smith said of his junior year. “Right now, I already have the career record for touchdowns, but they haven’t put that up there yet because I’ve got one more year left. I’m on track to beat the career interceptions record, too.”

Boyle football coach Chuck Smith has known that he’s had a special kid ever since Reese first joined the team and started varsity as a freshman.

It was that level of production and that athleticism that earned Reese Smith the Advocate-Messenger Male Athlete of the Year for 2019.

“It’s a big accomplishment. I can’t thank God enough for what he’s blessed me with,” Smith said of the award. “I can’t do any of this without my teammates and what they do for me. If it wasn’t for my offensive and defensive linemen and quarterback, then I wouldn’t be able to get open or have a chance to catch the ball.

“In basketball, I wouldn’t have this without the rebounding and all the other players playing hard. Even in track, without the other three guys running with me and even in the individual events, you’re running for yourself, but you’re still running for a team. Without the team, I wouldn’t be winning this award.”

As a junior, Smith was named first-team All-State. In one particular game against Western Hills, he went off for six catches for 105 yards and three touchdowns on offense, and a 100-yard pick six on the other side of the ball.

“He has those kinds of games week in and week out,” coach Smith said. “One of the games that stuck out to me was when we beat Belfry on the road, which was a big win for us. They didn’t have anybody on the team that could cover him. He was just the difference in the game.” 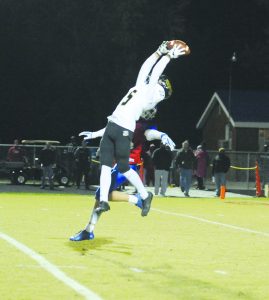 During his junior year, Reese Smith broke the school record and led the state 3A division in touchdowns with 20. (File photo Matt Overing)

Even though Smith played three sports throughout high school, he will only play football during his senior year. The reason? He will be graduating in December so he can attend West Virginia University in January and begin his collegiate football career. He believes that this will allow him to “get a head start” on other incoming freshmen and help his career both immediately and long term.

“I want to play a lot my freshman year when I get up there and have a chance to help them and be a successful player in the future and this was the best way to get to the top and reach my goals,” he said.

The decision to graduate early is something that Smith has been thinking about during his entire time at Boyle County.

“I had kept track of my credits and kept in the back of my head if I wanted to graduate early, I could,” he said. “I doubled up on classes and got extra credits to put myself in position to graduate early. I’m 100 percent set on graduating early, but if something changes and I decide that I want to play basketball and run track, I can always take a couple of extra classes and finish out my high school career and then head to West Virginia, but right now my plan is to leave early.”

Managing that many credit hours in high school while playing three sports can be difficult, but Smith said he had a good motivation to keep his grades up.

“I’m an A and B student, if I was anything else, my parents would kill me.”

He’s maintaining his lofty education goals going into West Virginia, as well. His plan is to use the additional semester to help him graduate in three years, and to earn his master’s degree in his final year as a Mountaineer. Although he still doesn’t know what he’s going to study.

The decision to attend West Virginia came at the end of a recruiting period that saw the star receiver and defensive back earn multiple offers from Division I power five schools. Kentucky, Tennessee, Louisville, Duke, Wake Forest and Cincinnati all offered him scholarships, but at the end, he had to decide what side of the ball he wanted to play on.

“I had schools recruit me as a defensive back like UK and Tennessee both recruited me there. So I had to make the choice of which side of the ball I wanted to play on. We discussed that as a family, too,” Smith said. “I talked to my family and my coaches and we ultimately decided that receiver was the right call and that’s what they wanted me as. Cincinnati tried to recruit me as both. They said you come up here and you can play whatever you want.”

“He had several Division I power five schools that had offered him scholarships. I’m not going to be able to name them all,” Chuck Smith recalled. “At the end of the day, I think he liked Kentucky and West Virginia the most. I think he chose West Virginia because of the offense they run and it suits him.”

Ultimately, it was the feel of Morgantown, W.Va that made Smith fall in love with it.

“Morgantown is the size of Lexington, but the population is the same as Danville, so if feels like home.

“We went up and took a visit and everything went smooth,” he added. “I was kind of kidding on the way back and told my dad that that was where I wanted to go after just the first visit. When I took my second visit, we were talking about the whole way there, my mom and dad and I. I told them that it was where I wanted to go, and if I had a good visit, I was going to tell them that I wanted to be a Mountaineer and that was it.”

In addition to it feeling like Danville, West Virginia offers another taste of home. His future coach, Neal Brown, was born in Danville and is a former Boyle County receiver himself.

“He understands where I’m coming from, the town and everything so we can relate a lot on stuff like that. I think we have a good connection,” Smith said.

Brown had been recruiting Smith since before he took the job at WVU, when he was the head coach at Troy. He was Smith’s second scholarship offer, and upon taking the job as the Mountaineers coach, made Smith his top priority, and his first commit.

The decision to leave behind basketball and track will be a tough one, Smith admits, but knowing that his future lies in football has made it easier, and he knows that being a three-sport athlete helped him to become the football player he is today. 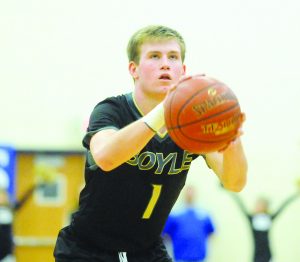 In basketball, Smith was a 1,000-point scorer for his career. (File photo Matt Overing)

“When you talk to all the football coaches, they’re all about athletes. They don’t want kids that just play football, they want two sport athletes, three sport athletes because all those other sports come into play and help you play football and helps you. The fundamentals of it just help you be a better football player.”

One thing that Smith will both miss, and thinks will prepare him for the high level college football he will be playing going forward, is the feeling of getting every team’s best game. He feels that the tradition of Boyle County’s football program makes them a target for teams trying to get a big win.

“I love it. Because everybody’s coming for you. When you know that everyone hates you, you know you’re going to get their best. Everybody brings their A-game.”