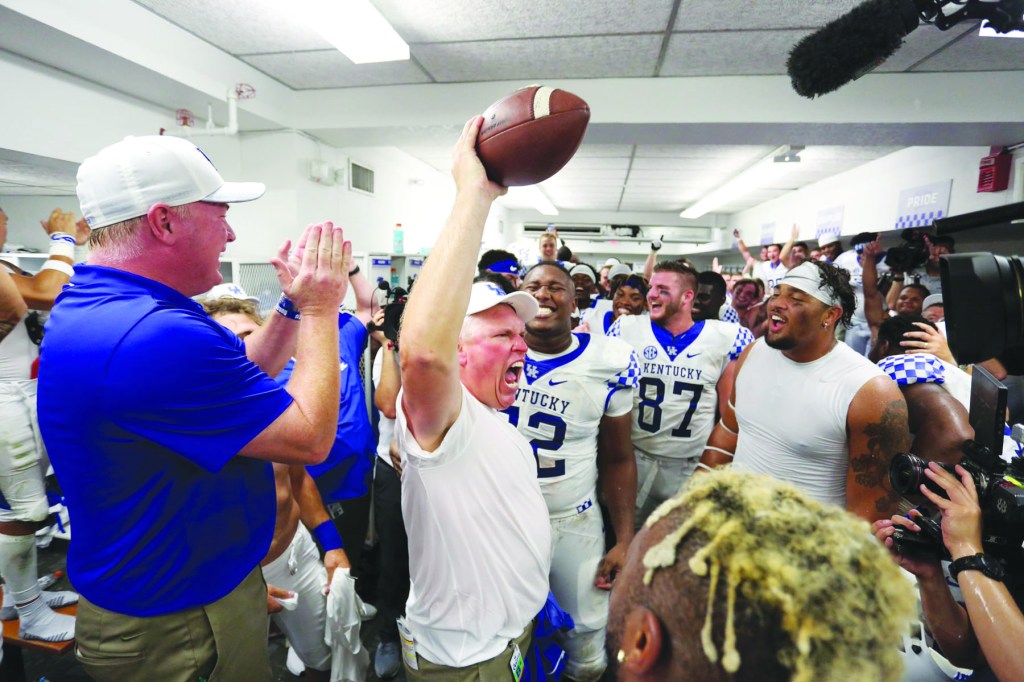 Offensive line coach John Schlarman was emotional last year after getting the game ball following UK's streak-breaking win at Florida just a few months after he was diagnosed with cancer. (UK Athletics Photo)

It wasn’t quite a year ago when news broke that Kentucky offensive line coach John Schlarman had been diagnosed with cancer and that sophomore defensive standout Josh Paschal had skin cancer.

Just a few days later I had a chance to talk to Neal Brown, the former UK offensive coordinator who was still the head coach at Troy (he’s now head coach at West Virginia). I knew he was good friends with Schlarman and the first thing Brown told me was that this adversity would only make Kentucky a closer, better team before adding Schlarman was the “toughest” individual he knew.

Turns out Brown was right about Kentucky’s season as the Cats won 10 games. He was also right about Schlarman not missing a beat despite the treatment he had to take during the season.

“Neal was 110 percent right about that,” said Kentucky recruiting coordinator Vince Marrow recently. “The weird thing about it is that cliche ‘bad things happen to good people’ and you could not have picked the best staff member and best player on the team and they both get cancer. I was like, ‘God is definitely trying to do something here.’ What it did was make everybody come together and rally to those two guys.”

“I am with coach Schlarman every day and I wondered how does he do this. Go to chemo and then come here and coach. It really changed me. You are never too old or too good to learn. I would look at him every day in meetings. He would catch me staring at him but I was staring at him like, ‘Wow, this dude is amazing,’” Marrow said. 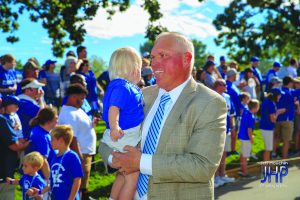 “John Schlarman is probably one of the top five people that I have met anywhere. It bothered me at first seeing that happen to him but how he dealt with that and his wife did … How can you be a lineman and have a coach doing that and then say you get tired. When I talked to the tight ends I would say, ‘He is doing eight hours of chemo and coming here. We can’t be tired.’

“Neal was 110 percent right. It brought our team together,” he added. “It helped our culture. Mark (Stoops) did a good job bringing that in. It could have gone the other way. You are dealing with kids from all these places and all of a sudden they see these guys with cancer. Everybody was dealing with their own thing but Mark a great job bringing it all together. I remember calling Neal when I got the news and I should have known he knew. He said, ‘Vince if anybody can fight, John Schlarman will fight through this.’ He was right.”

Schlarman, a former UK lineman, admits it has been a “heck of a ride” with plenty of highs and lows the last 12 months.

“Obviously being a part of one of the best seasons ever in this program was a tremendous high for a Kentucky boy like me. But having to deal with that health-wise was one of the most devastating things I probably have ever faced in terms of the early prognosis. The outlook was not very good,” he said. “I was fortunate I reacted to the medicine like I have. I haven’t experienced just a ton of fatigue or throwing up or whatever.

“I have been very fortunate I have responded the way I have. Things have gone in a good direction and hopefully they continue to do that now that we are a year out (from the diagnosis). I feel a lot better now than I did a year ago.”

Schlarman never tried to look ahead. As a coach, he knew how to take things day to day rather than let worrying about the future “drive you crazy.” Not coaching was never an option for him because he needed to keep “normalcy” in his life not only for him but also for his wife, Lee Anne, and four children — three sons and one daughter.

“I am not going to crawl into a corner or stay at home and stay in bed. I am not going to do that if I can avoid that. I think that is good mentally to not let this thing affect my life to where I can’t do what I want to do,” Schlarman said. “That’s been really important.

“Responding to the medicine the way I have has been very beneficial. Coach (Stoops) being very accommodating if I needed treatment or going back and forth to Houston to do that also really helped. I am doing a pill form of a new type of drug now, so it has been different. I have not had to do the IV and the chemo like I had to during the season. Going through that for 14 or 15 times and now getting to this, you really appreciate this because it is not quite as taxing on the body.”

Still, no matter what he faced, he kept a positive attitude that obviously rubbed off on players and coaches. Schlarman credits Bill Curry, his head coach at Kentucky, for helping put that positive mentality into his life. Same with his parents.

“Just growing up with two parents who worked hard their whole lives and never made excuses taught me a lot. It’s just kind of what I observed and saw my whole life. I didn’t know any better, or worse. I just try to always be positive,” he said. “The support system here has been unbelievable. Obviously with my family, my wife and all our friends but also here in the work place.

“I am just very fortunate for coach Stoops, coach (Eddie) Gran … everybody in this (football) building has been phenomenal. When you work with people like that and realize everybody has my back, it just makes you want to do better, do more, do whatever you can to help the program succeed. That’s all I did. I didn’t do anything special. I just did my job and plan to continue doing my job. That’s all I know how to do.”