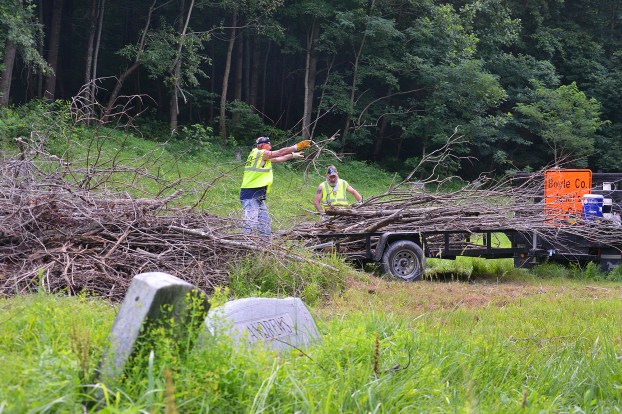 Tony McCormick, left, and Michael Abell, both inmates at the Boyle County Detention Center load a trailer with limbs as they clean up a brush pile at the Wilsonville Cemetery Tuesday afternoon. (Photo by Robin Hart)

A local cemetery organization striving to locate and save area African American cemeteries from being swallowed up by time and nature is getting some manpower assistance from the Boyle County Detention Center. 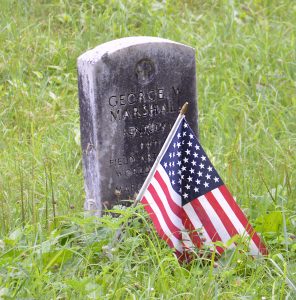 A new American Flag is placed at the grave of George Marshall at the Wilsonville Cemetery. The marker states he was in the field artillery in World War I and was born in 1886 and died in 1954. (Photo by Robin Hart)

Mike Denis said he had contacted Jailer Brian Wofford several months ago about the possibility of participating in his program that allowed inmates to help nonprofits with their labor needs.

“The problem was that he couldn’t go in unless he had permission from the owner of the cemetery, and we had no idea who the owner was,” Denis said.

Then the niece of the late Ella Marshall, who had taught school there from 1932 to 1962, wanted to set her gravestone. She discovered the owner of the land and cemetery was the African Methodist Episcopal Church in Lexington. That made it possible for the cemetery group to get permission to clean up the area, Denis said.

On Tuesday morning, two inmates, Michael Abell from Casey County and Tony McCormick of western Kentucky, along with Deputy Jailer Fred Edwards were at the cemetery with work gloves, a flatbed trailer and a pickup truck. At the base of the wooded hillside filled with graves was a huge brush pile of saplings and limbs that needed to be hauled away. Student volunteers from Centre College and Eastern Kentucky University had cleaned out the overgrowth this past fall and summer, Denis said.

“Wilsonville has been one of those ‘when we can get to it’ cemeteries. We don’t have a set schedule for working there,” Denis said. “With college students away for the summer, younger help is hard to come by.”

The small membership of the cemetery association maintains three African American cemeteries on a regular basis, and one on an irregular basis, Denis said: Meadow Lane Cemetery in West Danville; Wilsonville Cemetery between Alum Springs and Parksville; Shelby City Cemetery on Short Acres Road, just over the county line in Lincoln County; and occasionally Givens Cemetery on Peyton Well Road at Turnersville in Lincoln County.

“What we have discovered is that unless there is an ongoing maintenance plan, as we now have for Shelby City and Meadow Lane (cemeteries), it’s an uphill battle. One does not mow one’s lawn once a year and expect it to look like a golf course,” Denis said.

Bill Stocker was also at Wilsonville Cemetery Tuesday morning. He is the cemetery association’s “unofficial senior groundskeeper,” Denis said. “Bill is out there two or three days a week or more, working to revive black cemeteries because it needs to be done.” 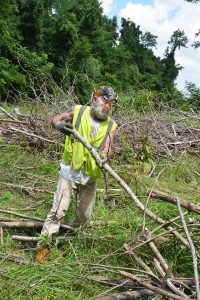 Michael Abell, an inmate at the Boyle County Detention Center from Casey County works at the Wilsonville Cemetery cleaning up a brush pile Tuesday afternoon. (Photo by Robin Hart)

In the blazing hot July sun, with sweat dripping down their foreheads, Abell and McCormick loaded limb after limb onto the trailer that would be taken to the nearby Alum Springs Convenience Center, where they would be unloading the debris. By noon, the men had already taken three loads to the center and guessed it would take about six more trips to clean up all of the brush pile.

Abell said he didn’t mind the hard, hot work. “It makes the day go by faster,” he said.

“We are afraid that this will become just one more ‘lost’ black cemetery,” Denis said. “It is in decent condition now, but it wouldn’t take many years before it would become overgrown and unmanageable. With 214-plus burials there, it is one of the largest black cemeteries in the county and we cannot afford to lose it.”

A new and innovative program to help inmates at Northpoint Training Center adjust to life after their substance abuse recovery... read more